French publication Libération compared Vladimir Putin's upcoming visit to Paris with a trip of  Russian czar Peter I to the French capital in 1717, when the czar established strong ties between Russia and France. Putin is expected to visit Paris to attend the exhibition dedicated to the 300th anniversary since the Russian emperor's visit to the French capital, the publication believes. 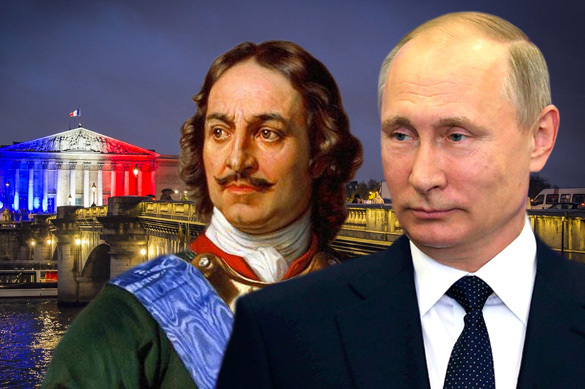 France's new President Macron is expected to meet the Russian prudent in the Palace of Versailles. The Russian-French relations experienced a crisis during the presidency of Francois Hollande. During the election campaign, Macron was the only among leading candidates who did not admire Putin, but assured that he would build relations with him, balancing between dialogue and firmness. For Moscow, Macron's victory was the worst scenario. The Russian media continue to ridicule the new president of France, calling him an antichrist and making scathing remarks of the age difference between him and his wife, Libération wrote.

President Vladimir Putin congratulated Macron on the victory and expressed a hope that they will manage to overcome mutual distrust. During the talks with Macron, the two leaders will discuss issues of combating terrorism, the settlement of conflicts in Syria and Ukraine, as well as prospects for the development of Russian-French relations in the political, trade, economic, cultural and humanitarian spheres.

According to the publication, the purpose of Putin's trip to France is to resume a peaceful dialogue and start a new page in relations with France and the EU.

The meeting between presidents of Russia and France - Vladimir Putin and Emmanuel Macron - is to be held on May 29. Putin will take part in the opening of the exhibition dedicated to Peter I. The exhibition is organised jointly with the St. Petersburg Hermitage.