Emmanuel Macron: A political pawn in the battle for France

As a result of the first round of the presidential election in France, most people believe that the leader of the current race, Emmanuel Macron, a 39-year-old banker, is going to win the election and become the next President of France. Where is France going? 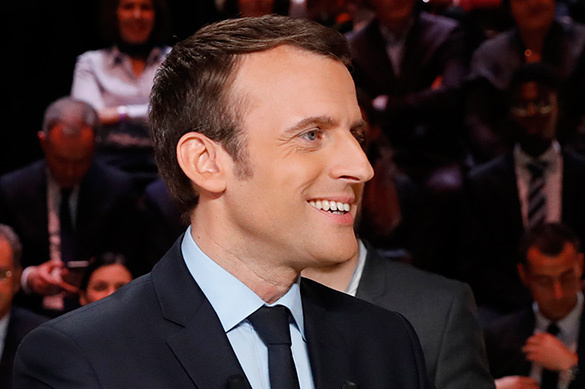 Emmanuel Macron is not a representative of a party. He does not personify a political structure that relies on a certain social basis that expresses its views and interests.

The prime goal of the technology is to achieve decisive superiority of forces in the right place and at the right time in full compliance with defense science.  Macron's program (or rather, a set of promises) has allowed him to achieve such a superiority. Emmanuel Macron, within the shortest period of time possible, managed to mobilize young people of France - the people who grew up in the united Europe.

This is a very special social phenomenon. For those young people, history began at the end of the last century, with the creation of the EU and the collapse of the USSR. Young people of France are not familiar with everything that was before that - national states and wars between them, poor  technologies that gave rise to social inequality and  racial, social, religious and sexual prejudices. To win the support of the youth, Macron took up a slogan from the Marseillaise: "Let us denounce the old world, shake its dust from our feet!"

More Europe, more freedoms, more new technologies -this is what Macron's program is all about in a nutshell.

Does it remind you of anything, dear reader?

Indeed, it is reminiscent of a revolution, a French revolution. This is what France is really good at: revolutions on the least occasion. For the French, a revolution is a regime change in the first place. France has had five republican regimes. Today's France is the "fifth and a half" republic after President Sarkozy changed the constitution.

Regular revolutions do not occur in the country because of the frivolity of the French. The prime reason is the chronic inability of the French elites to provide their citizens with what they want: a continuous improvement in the quality of life. France simply does not have enough resources for this. France is a  great power, a nuclear power, that has high technologies,  developed democracy and  practically everything else that one needs  for continuous progressive development. At the same time, the French admit that their country is a passenger who wants to travel first class being able to afford only second class tickets.

One shall assume that Macron's victory is an attempt of the people of France to keep up their first class traveling. The rule of traditional parties (right forces under Sarkozy and left under Hollande) has revealed the impotence of those parties. They, just like the National Front, come from remote past. As a result, the country has found itself where it is today: the young people of France see no future for themselves, nor do they have a first class ticket.

Yet, the French firmly believe they should not fall to the level of Spain or Greece. For them, Macron is a hope. He is fresh and eloquent, and he said the things that people wanted to hear from him: new technologies and France as the center of all Europe.

He did not say only one thing: where appropriate resources are going to come from and how he is going to make his promises a reality.

The only way to achieve the things that Macron was talking about is to make mechanisms work for France. In other words, France would need to make Germany move. Germany would need to hand over the role of the leader in Europe's foreign policy and business to France.

Needless to say that Germany will not go for it. European solidarity is a good thing, but Germany's giant companies will not give way to their French competitors.

On the whole, the first round of the presidential election in France has seen the victory of a weak politician who does not decide much, nor does he have a clear program or a solid base. Honestly, Macron reminds of Ukraine's Poroshenko. His role is to become another pawn in another game called "Battle for France."