Hollande flushed down the golden toilet

One of the New York non-governmental organizations declared the French President Francois Hollande the Statesman of the Year. The award was given by the Appeal of Conscience foundation, which had been founded by a well-known New York rabbi Arthur Schneier. 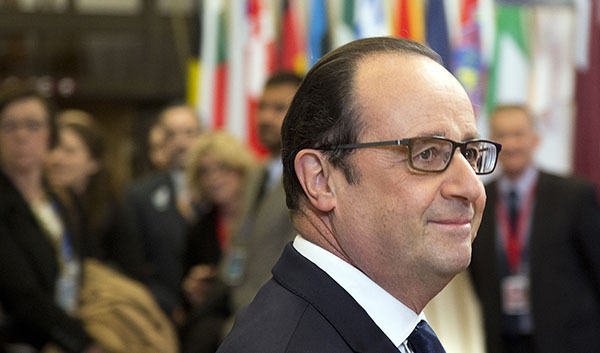 The Foundation saw the merit of France in combating terrorism. Hollande received the Statesman title for his tough stance on 'safeguarding democracy and freedom' after terror acts in France.

One of the French caricatures shows a bent Statue of Liberty without a torch laughing at Hollande in a small boat. Such scandalous reaction is connected with deep antipathy feeling of the vast majority of the French to their President. His approval ratings make up only 11-12%. Let's look at the facts.

After he was elected, none of his campaign pledges was fulfilled, but for improvement of migrants' state. Thus, Hollande promised better life and growing national economy. Nonetheless, the GDP is on the verge of zero, and if taking into account inflation, it's even negative. The budget deficit made up 3.5% in 2015. youth unemployment reaches 30%. since August 2008 unemployment has risen up to 147%. that is why about 30% of the French are ready to vote for the ultra-right National Front.

Immigration can be seen by the unaided eye. Among pseudo achievements of the last month are eviction of refugees camp of 1,500 migrants from the very city centre of Paris and sexual assault on a French woman by 3 Algerians just at the Eiffel Tower.

Military 'achievements' of the French are just terrible. In response to a terror act which took lives of dozens of people in Nice on 14 July, France carried out massive strikes against the territory of... Syria by order of the President, and annihilated 164 peaceful residents. The Syrian envoy to the UN accused France of crimes against humanity speaking at the Security Council.

'Well-wishers' of Hollande also keep reminding of the French state's 'deeds' in Africa. If his predecessor Sarkozy (as he wanted to conceal funding of his campaign by leader of Jamahiriya) is responsible for Gaddafi's death, all the further politics in Libya, Mali and Central Africa are absolutely on conscience of the latest French President.

Shameful treatment of the poor by leader of the Socialists has already become a byword (it was revealed by his ex-wife Valérie Trierweiler), as he calls them just 'toothless'.

No less odious he's among the military. He has cut the Defence Ministry budget 2 times. The French officers publicly addressed him trying to explain that the army is on the verge of collapse.

It seems that only immigrants, LGBT (top officials are well-known in the government), and the Islamists (halal food is introduced at schools as well as tolerant treatment of rapes by judges) applaud him within his home country.

No less 'decent' reputation he has gained in the foreign policy. Supporting the US initiative on sanctions against Russia, he deprived his own agriculture of jobs. Russia's embargo brought France billion-worth losses and not only in agriculture but also in the field of high technology. Every one remembers the case with Mistrals. And France used to have good relations with such Russian corporations as Sukhoi, Mikoyan and others.

Total political and economic crash of the president's policy is evidenced. Comparing him with Sarkozy, the press calls him nothing but a political nonentity. Most of the voters believe that the French policy goes through a century of political pigmies, who betray interests of their home state.

So, about which statesman are we talking? Maybe an old rabbi has his own grounds we are not aware of. But he hasn't cared about the Israeli interests either. The award should be named nothing but a political absurd in the style of Golden Toilet grant.