The French want something fresh: 6th Republic and taxes on robots

The results of first televised debate of French presidential candidates do not look too comforting. The debate has shown that France is unable to determine its development strategy under new and extremely complicated conditions. The French elite is divided, the society is disoriented - everything indicates a looming acute political crisis that the new president of France will have to face. 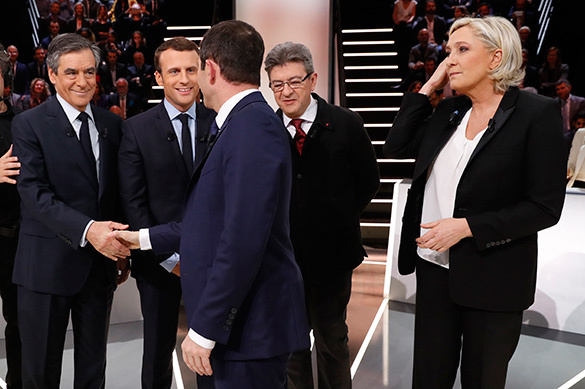 Leftist candidate Jean-Luc Mélenchon stated that he was going to become the last President of the Fifth Republic and initiate the reforms that would create the Sixth French Republic.

A survey conducted by Elabe sociological institute immediately after the debate showed that Mélenchon took the second place on his credibility, losing only to Emmanuel Macron and leaving all other three contenders for presidency behind. Macron seemed credible only to 29 percent of the polled, while leftist Mélenchon - to 20 percent. Marine Le Pen (the National Front) and François Fillon (Republicans) received 19 percent each, while socialist Francois Ammon - 11 percent.

Interestingly, other six candidates have been excluded from the TV debate (there are 11 candidates running for presidency in France). Only five leaders were allowed to take part in the debate as it seems to be extremely difficult to arrange a TV show with the participation of eleven candidates. Yet, why doesn't the French democracy provide equal conditions for all candidates to present their election programs?

As for election programs, it appears that the French are not too willing to analyze and choose the best of them. This is evidenced by Macron's first place in the debate: this man has no political past - he set up his movement "Forward!" on the eve of the election campaign. Obviously, this is not a party, and Macron does not have any program. He uses statements of his opponents that voters like most and sculpts his own slogans from them. Macron himself is empty - this is what his rival Marine Le Pen said about him. According to her, it is impossible to find independent and clear ideas in what he says.

Yet, it appears that the French like it. Like all other European societies, the French are clearly tired of traditional parties that have been ruling for decades. The French want something fresh: Mélenchon promises them "the Sixth Republic" and Macron - new ideas and new faces.

The problems that France faces today are so complex that neither the elite nor the society are able to find out a way to solve them. This may explain the emergence of completely irresponsible projects like guaranteed income for all French people, or taxes on robots, as Francois Ammon proposes. This is pure populism.

Therefore, one may conclude that the French will elect their president regardless of their programs They will see what views a candidate takes on certain issues. This year, the French will not vote for their future - they will vote for the solution of their current pressing problems.

There are several of such problems and they are obvious: relations with the European Union, migrants, unemployment and economic revival. Traditionally, the French population remans divided on each of those problems. This division is visible in almost every national poll. After 1969, no French president has ever received more than 55% of votes. The exception was the election in 2002, when Jacques Chirac beat Jean-Marie Le Pen and gained more than 82 percent of the vote.

Even if the scenario of 2002 is implemented, when both the left and the right united against the founding father of the National Front, Jean-Marie Le Pen, it will be hardly possible to avoid the crisis. The French society will demand the winner should bring dramatic changes that would be enough for the establishment of the "Sixth Republic." The most critical point in all this is that no French presidential candidate has a clear strategic program. The French will receive nothing but another portion of half measures and hopes for "pan-European efforts," complaints about "Donald  Trump's wrong policies" and attempts to blame Russia for everything.