Russia, Syria and Iran as united front against USA

Foreign ministers of Russia, Syria and Iran are going to meet in Moscow on April 14. The allies will gather in the Russian capital to discuss a number of important issues following the recent visit of US Secretary of State to Russia. 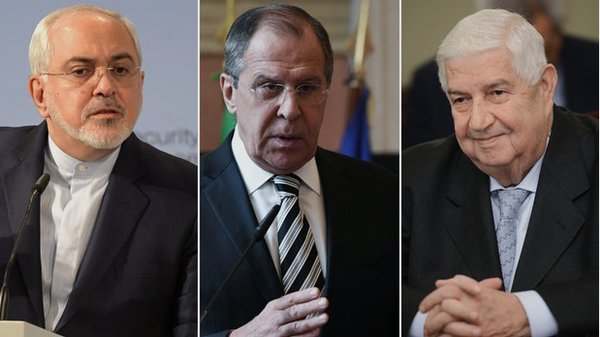 The foreign ministers of Syria and Iran will discuss the situation that has developed in Syria after the US missile strike on Shayrat airbase.

"Possible joint steps for international and regional peace and security will be considered to minimize negative consequences of this gross violation of international law," official representative of the Russian Foreign Ministry Maria Zakharova said earlier.

Rex Tillerson does not lose hope to persuade Russia to begin cooperation with the US and refuse from supporting Syrian President Bashar Assad.

During his visit to Moscow, Tillerson had meetings with Russian Foreign Minister Sergei Lavrov and President Putin. Later, Donald Trump called the talks positive and wrote that the relations between the two countries would be "just fine,"

"Things will work out fine between the U.S.A. and Russia. At the right time everyone will come to their senses & there will be lasting peace!" Trump wrote on Twitter.

However, it still remains unclear whether the US has been able to convince Russia to give up on Assad.

The leaders of the United States and Syria have exchanged insults. In a recent interview, Donald Trump called Syrian President Bashar Assad an "animal." Spokespeople for the Syrian Foreign Ministry did not leave the remark unanswered.
"If you are an 'animal' yourself, there is no need to think that everyone else is the same. Bashar Assad is the president of a sovereign state, he was elected by the people. And it's the Syrian people who should give him descriptions, not Trump," Ayman Susan, a spokesman for the Syrian Foreign Ministry said Thursday.

"So far no one knows what to expect. They have been trying to take Bashar Assad out of the game for two years already, but there is still uncertainty," Alexei Malashenko, a member of the Moscow Carnegie Center said. Malashenko believes that it will be important for Russia to urge the Syrian and Iranian sides to reason.

Theodor Karasik, a leading analyst at Gulf State Analytics, believes that in the near future Russia is unlikely to "give up" on Bashar Assad. "The positions have been cemented before next escalation," he said.

In Syria, Russia and Iran have similar positions, but experts note that strategic goals of the two states differ. Tehran, for example, wants to make Syria a theocratic state, while Moscow will be satisfied with a stable Syrian regime with Assad. Or without him.

The goal of the United States is to play a game of disagreement between Russia and Iran.

Iran and Syria want Russia to exclude new US attacks on Syria. Russian Foreign Minister Sergei Lavrov said that during negotiations with Rex Tillerson, Russia and the United States agreed that this should not happen again as potential US attacks could seriously disorient the Syrian army.

However, Russia does not intend to enter into conflict with the United States because of Damascus, despite the agreement on military assistance with Syria.

Experts on Syria doubt whether Syrian President Assad can control the situation, even though it is the president who commands the armed forces of the country in accordance with the constitution of Syria.

During the upcoming meeting in Moscow, the sides will also discuss a future format of their relations with Turkey, which joined Russia and Iran to initiate the peace process in Astana and participated in joint military operations against Islamists. Ankara welcomed the US attack on Syria, which means that the group may split. However, Putin's recent telephone conversation with Erdogan confirmed that Russia would continue to cooperate with Turkey on Syria.

The United States has not developed a final policy in the Middle East. Instead, America sends "conflicting signals" to Russia and other countries. "It's too difficult for Trump, he is a person who came from another environment," says Alexei Malashenko, a member of the Moscow Carnegie Center.