Urgent meeting of the UN Security Council which was initiated by Great Britain, France and the US turned into attempted public flogging of Russia. 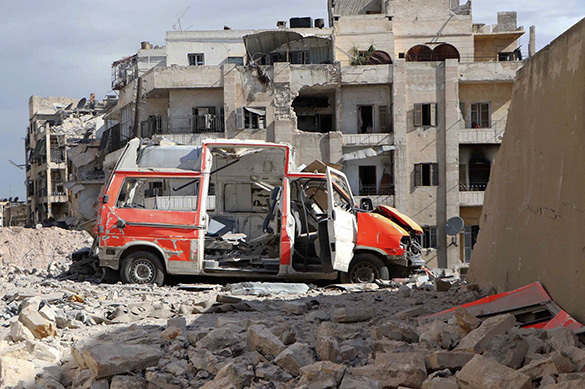 Initiators of the meeting along with Germany, Italy, and an EU representative that joined them the day before, called military action of the Syrian army in Aleppo to be inadmissible. They called the UN SC to take a corresponding stance on the matter.

The 'six' also pointed out in an ultimatum-like way that given inability and unwillingness of Russia to follow its obligations, their 'patience is not boundless'.

The US representative in the UN Samantha Power claimed at once that Moscow and Damascus lead 'a full-scale offensive' on the East of Aleppo, calling the Russian acts to be 'barbaric'. According to her, the Russian side tends to continue war in Syria.

The Russian Defence Minister Lavrov claimed that the US tried to make Russia responsible for everything going on in Syria.

It was clear from the very beginning that the meeting will give no results, apart from accusations of Russia and Syria. What for was it arranged? Colonel General Leonid Ivashov, President of the Academy of Geopolitical Problems, told Pravda.Ru in an interview.

'A war is a war, let it be even information one: they attack, we defend. In this regard we should take into account the American strategy - to stop Russia by all means, moreover now, the moment presidential race is going to an end, it's clear that Obama's Administration wants to show that it has achieved something and managed to punish Russia,' Leonid Ivashov told Pravda.Ru.

China here takes an ambivalent stance, the expert continued. On one hand, it tries not to go the length of tough confrontation with the US, while on the other hand, it takes into account its big interest in the Middle East.

Today Beijing supports Syria with military advisers, equipment, military, thus it's at one with Russia. Beside that, Russia along with China participated in anti-American drills in the South China Sea. China took part in drills in the Mediterranean along with the Russian vessels in 2015.

'Thus, stances of Beijing and Moscow are close to each other. China won't vote for the US resolution, but will it be ready to say No? I believe China may abstain,' Leonid Ivashov, stated.

Vitaliy Churkin, Russia's Permanent Representative to the UN claimed at the urgent meeting that return of Syria to peace under constant bombing of the territory by everyone who feels like it, has become almost an impossible task. He also added that Russia refuses to undertake unilateral steps on ceasefire. Will the Americans now start bombing Assad's troops and how should Russia act in this situation?

'The US stance has not changed for a long time: Bashar al-Assad should be dethroned. The roots of this stance lie in gas pipeline from Qatar to Turkey across the territory of Syria, which presupposes profit worth of hundreds of billions dollars. The US companies have great interest both in installation of the gas pipeline, and in pumping and transportation of this gas,' Leonid Ivashov told Pravda.Ru.

And here they should break Assad, making him agree to let this gas pipeline across the Syrian territory, but at the same time create a competitive alternative for Russia, which the Syrian President doesn't want to go the length of. Thus, Assad should be neutralized in some way or just dethroned.

'It's clear that the US won't like to change its policy in the region. And if they don't manage to break opposition of the Syrian government forces with the help of terror organizations and incidental bombardments, they may order their armed forces, satellites, to bomb the Syrian troops. It's quite possible that 'propaganda prelude' and attempt to condemn Russia were masterminded namely with this aim,' the expert asserted.

Demonstration of anti-Russian and anti-Syrian stances by the Americans is too evident: breakdown of peaceful negotiations, strike against the Syrian troops, against humanitarian convoy, that is all an attack against Russia, against its political positions.

'In such a way the US tries to prove that nothing depends on Russia' agreement, on its opposition, and as Russia cannot be a guarantor, other states shouldn't trust it. Annihilating guarantees, which Russia gives, the Americans thoroughly discredit and undermine its status in the region,' Leonid Ivashov said.

Undoubtedly, Russia has no reason to enter into open combat acts with the Americans. But we cannot leave Syria without protection either. Now, intensive consultations with China and Iran should be started, the political scientist believes.

'We need allies today. Thus, Beijing and Tehran should be reported that they will be the next in case Russia looses at this front. Some new coalition should be created, and all these commissions on reconciliation should be handed to neutral countries - India, for example,' Leonid Ivashov concluded.