The attack in the St. Petersburg metro on Monday, April 3, has become one of the main events in world media. Two explosions ripped through the metro system of St. Petersburg in the afternoon of April 3. Originally, it was reported about 10 victims. By 10 p.m. MSK, the death toll has climbed to 11. Of course, the world community could not stay aside from the tragedy in Russia. Some presented their sincere condolences and offered help, while others gloated over the deaths of innocent Russian people. 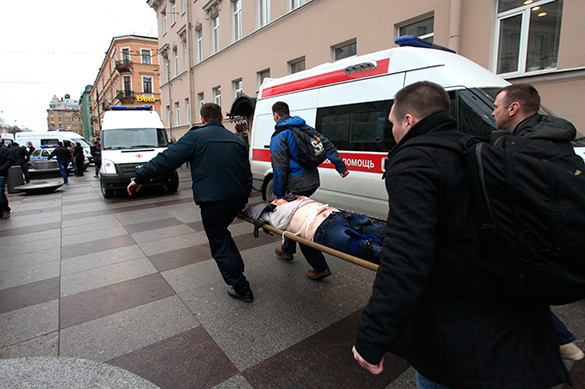 As reported by Deutsche Welle, German experts had no doubts from the very beginning that the incident in St. Petersburg was a terrorist attack. They referred to the fact that there are many Russian nationals (presumably natives from the Northern Caucasus) among Islamic State militants in Syria.  In their opinion, the terrorist attack in St. Petersburg could be committed by Islamic extremists who returned to Russia from Syria. It is also worth mentioning that German experts do not rule out the involvement of Ukrainian right-wing radicals in the incident.

US-based television company CNN invited former chief of the CIA department for Russian operations Steve Hall to discuss the tragic events in Russia's iconic city. During the interview, Hall said that the Russian president would rely heavily on the FSB in the investigation of the terrorist attack. The Federal Security Bureau would quickly get to the essence of what happened in the heartland of Russia, Hall said adding that Putin would demand quick answers to all questions in this connection.

Fox News, in turn, said that Russia suffers from attacks by Islamist terrorist groups. A Fox article recalled major Russian terrorist crises, including most terrible ones in Beslan and the hostage crisis in the Moscow music theatre. The article said that it was the Islamic State that would claim responsibility for most of recent attacks in the country.

France's largest and highly authoritative newspaper Le Figaro published a neutral summary of the tragedy in St. Petersburg and provided neither words of sympathy nor reactions from French policy makers.

On the contrary, second-largest French publication, Le Monde, conveyed words of sympathy from French Foreign Minister Eiro. At the same time, Le Monde linked the terrorist act in St. Petersburg with Russia's support for the regime of Bashar Assad."

The reaction in the press appeared immediately. The Washington Times produced something special indeed by posting photographs from the site of the explosion next to pictures from a recent protest action in Russia. Russian Foreign Ministry took action to contact the editorial staff of the US-based publication. "There's a hope that this is not a deliberate compilation of facts with the purpose of misinformation," Maria Zakharova, an official spokeswoman for the Russian Foreign Ministry wrote.

After a call from Russia, The Washington Times changed the photos.

Noteworthy, US officials behaved in a human way and offered condolences to the Russians.

"Shocked and saddened by explosions in St.Pete and the resulting deaths and injuries. Our hearts go out to victims and families," spokeswoman for the US Embassy in Russia Maria Olson wrote in her Twitter account.

Words of condolences arrived from Secretary General of NATO Jens Stoltenberg and official representative of the government of Germany Steffen Seibert. The UK offered help to Russia, whereas the head of EU diplomacy Federica Mogerini said that the European Union condoles "to all Russian people, and especially to those who lost their loved ones."

It would seem that everyone has forgotten about political disagreements on such a terrible day. Yet, some wanted to mock the tragedy and gloat over the victims. An Internet community in Ukraine posted a picture saying "I'll explode for Russia in the metro" against the backdrop of the Russian flag. The administration of the group was sober enough to delete the entry some time later. Another Ukrainian, Ekaterina Rubanova, who lives in Kiev, changed her morning post on Instagram to make it sound like an ominous prediction. "A terror attack to come today. Wait," the woman wrote.

Ukraine's Foreign Minister Pavel Klimkin wrote: "We are checking whether there are Ukrainian victims in St. Petersburg. I express my condolences to families of the victims," he wrote on Twitter.

Words of condolences and support came from the Baltic States, India, Turkey, Georgia. The administration of Ankara metro has increased security measures in the underground system in connection with the explosions in the subway of St. Petersburg.

A three-day mourning has been declared in Russia's Northern Capital - from April 4 till April 6. we at Pravda.Ru express our sincere condolences to relatives of those who were either killed or injured in the St. Petersburg metro bombings.