Scandalous Duterte: a friend of Russia or temporary companion?

This week the Filipino President has bluntly demanded of the European Parliament to mind its own business, rather than that of his country. 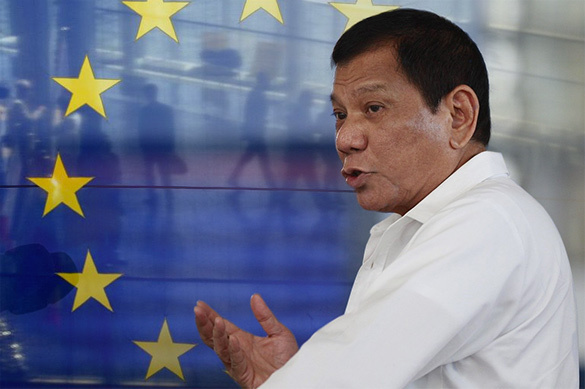 The reason is a latest resolution of the European Parliament, which condemns Duterte's plans on appliance of death penalty for drug-related crimes in his country.

'Do not impose your culture or your belief in what would be a government in this planet. Do not impose on other countries, especially us. Why don't you mind your own business? Why do you have to f**k with us?' he claimed during his visit to Myanmar.

The Filipino President is famous for his sharp terms towards the Western politicians. In particular, he has called the UN High Commissioner for Human Rights Zeid Raad Al Hussein to be an idiot and Barack Obama to be a son of a whore.

Global community used to condemn ways of combating drug dealing in the Philippines. According to the UN data, since Duterte came in power on 30 June, 2016, more than 6,000 people have been killed.

It is known that the Filipino President leads quite a harsh anti-drug campaign in his country, combats various social diseases on the islands. In fact, he is the only one in Asia who openly struggles against the US will and wants to be friends with Russia.

Andrey Klimov, Deputy Chairman of the Russian Federation Council Committee on International Affairs, who has been to the Philippines recently, has commented Pravda.Ru on the issue.

I have met him twice. First, at the East Asia summit, where I was a part of the Russian delegation. Second, in his presidential palace. That is where I had possibility to talk with him for almost an hour. I have known people from his team for quite a long time and used to communicate with them too.

The Western media presents a caricature of his acts. He realizes what he does. He is not anti-American. He is just against US' meddling in affairs of his country. Duterte understands that the US is a state normal relations should be maintained with. He tries to explain the Americans, that 'we are not a colony, we are a sovereign state, and if you treat us like this - we have nothing against you; we are ready to have a dialogue'. He says the same thing to China. And while he regards Russia as a factor of stability in the Association of SouthEast Asian Nations, he figures out ways on how to establish more tight relations with us.

And he is not the only one within the ASEAN, who makes such statements. His team though is not the only opposition which has seats in the Filipino Parliament. Even before Duterte came into power, they had hosted Valentina Matviyenko, they arrived to ours with a visit, although the West was not happy with such steps. Such consciousness is in the air of the majority of the ASEAN countries. Russia is a factor of stability throughout the whole ASEAN space. It should not be attributed to the current president, although Duterte is a very powerful person. He is now supported by about 85% of the population.

Which joint projects do we have? Do we intend to make use of his sympathy?

We will be able to talk about this after his visit to Russia. It should be discussed by two leaders. Russia surely has what to offer: technologies, which can be transmitted, ability to train personnel for the Philippines, military cooperation, tourism development, energy, mining. We may render assistance in more effective mining and production.

Another moment is fight against international terrorism. As Duterte said, we have successfully carried out combat acts in Syria. But part of these bandits has fled, and some of them settled in the Philippines, try to do their 'black deeds'. The Philippines is interested in a more tight cooperation with our special services. Strategic partnership should be established. We may open a new page of relations with this country.

Such expressive charismatic people may be both consecutive and unpredictable. Hugo Chavez kept his promises despite scandalous statements. And what about Duterte? Is he capable of keeping to his own policy and remaining committed to the Russia-Philippines friendship? Won't he make use of Russia to reach his own goals?

I am not a prophet. But the way he speaks evidences that he does not try to play and say us one thing, and somebody else another. He does not claim that the Americans are villains he will never have anything in common with. He says that he continues relations with the US, because such people as Obama tried to talk with him haughtily.

He does not say 'We will not communicate with China'. He means 'Yes, we have some problems with China, we will discuss them and take decisions'. He does not say 'We surrender to Russia for ever'. According to him, 'We are ready to talk with Russia, because we see it as a very perspective and reliable partner, we are ready for negotiations'.

Such a stance seems to be quite more stable than simple words on friendship, we can often hear. And the other day people say about this great friendship to others. And here is a more sensible and promising approach of Duterte.
Pravda.Ru