Why Obama condones Duterte’s ‘son of a bitch’

Centre of the open anti-American opposition has shifted from Venezuela to the Philippines, from Hugo Chavez to Rodrigo Duterte. The latter claimed that his government would carry out an independent foreign policy. First of all, independent from the US. For the US, access to its military bases in the Philippines given opposition with China in the South China Sea is extremely important. 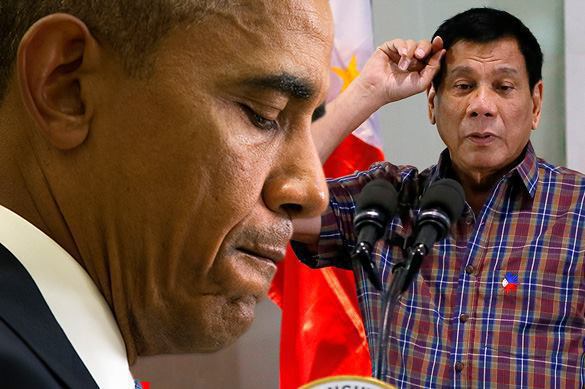 That's a son of a bitch!

Namely the bases issue makes Obama minimize provocative statements of the Philippine president. And the case is not only in the rhetoric (like Obama is 'a son of a bitch'), but in decision to oust the US military from the island of Mindanao, refusal from joint patrolling of the South China Sea and orders to the Defence Ministry to buy weapons in Russia and China. The case is that Obama and Clinton cannot let the pro-American axis they have been creating for the latest 8 years in Asia be destroyed. How will Washington's failures in Europe and the Middle East be explained then?

However, in case Duterte crosses the red line, he may be annihilated. All in all, coups d'etat in the Philippines is a common case. Now the task of the Western mass media is to make an image of Duterte as an insane man, bloody dictator like Stalin and Castro, who is not capable of supporting friendly relations with the US and jointly combat the 'Chinese aggression'.

Philippines not to live peacefully with the US

The Philippines are the US ally, the countries have had an agreement on mutual aid for a long time. The previous president Benigno Aquino III adhered to the pro-American policy. Under him, the Philippines have been the first country that got the US aid worth 120m dollars this year. Under Aquino the Philippines filed a claim to the Hague court to recognize China's claims on the Spratly archipelago in the South China Sea as unfounded and won the case. The US has been waving with this decision as like with a flag in front of the infuriated Beijing so far, but Duterte hasn't taken it up. On the contrary, he addressed China asking to help in combating drug dealing.

Rodrigo Duterte won at the elections in May, because people trusted his capability to defeat the drug mafia and restore order in the state where the Islamists from the Abu Sayyaf (organization created by the CIA from the Philippines who fought against the USSR in Afghanistan) become active. After more than 16,000 suspected dealers and consumers had been arrested by the authorities, and 700 had surrendered, the drug traffic reduced by 90%. About 3,000 drug dealers were shot dead at the scene of the crime. That is the last moment which makes the Western human rights advocates indignant.

Responding to Obama's claims, Duterte advised him not to meddle in home affairs of the Philippines. It was when the obscene statement was made. Indignation of the president may be understood if the bloody history of 'pacification of Moros' on Mindanao is recollected. The Americans conducted a massacre in their colony in 1906, when about 1.4m Muslims were killed.

It should be added that Obama under Aquino saw no executions, tortures and violations of human rights, which were of enormous scale according to the Karapatan organization. There were registered 307 cases of extrajudicial death penalties, 215 cases of tortures, 903 illegal arrests. 11,734 people were evicted from their houses, 105,616 people were evacuated from their communities by force. As a result of Aquino's rule, 27m Filipinos live in dire poverty, and the economic growth of 5.9% is driven by the real estate sale, financial speculative intermediary deals, which enriched not the people, but oligarchy groups and oversea corporations. Unemployment, poverty and landless people have not disappeared. While state terrorism, corruption and inequality which existed under Aquino were a banned subject in the Western media, as Aquino thoroughly implemented Obama's orders and was an obedient puppet.

Duterte is not Washington's puppet

Duterte is not a puppet. Today he is on the way of federalization of the state. He holds talks with all the concerned parties, including the Moro Islamic Liberation Front. Duterte has support of 91% of the Filipinos who agree that the war against drug dealers is taking place and no prisoners should be taken.

Duterte is not only fighting, he will also construct a railroad on the Mindanao with the help of China. It will secure economic growth for the depressive region. These realia oppose a beautiful image of the US-Philippines friendship: the American battleships with marines in pretty costumes singing yo-ho-ho in the South China Sea along with their Philippine colleagues. Such a friendship will not last long.