Argentina and Brazil: Degradation continues because USA wants to

The people of Brazil and Argentina begin to realize that their new governments have not justified their hopes. Living standards in the two countries continue worsening, and there is no bright future ahead. In 2017, Argentina will hold parliamentary elections, while the people of Brazil will go to the polls to elect their new president in 2018. Why did Washington mastermind neoliberal coups in the Latin American countries? 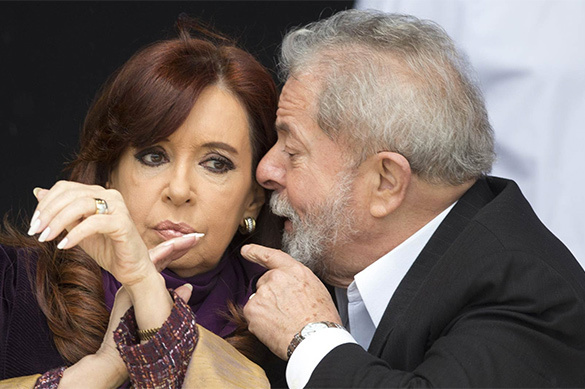 Washington's efforts to change governments in Argentina and Brazil

On December 10, 2015, neoliberal Mauricio Macri took power in Argentina, having defeated Peronist Cristina Fernandez de Kirchner. Macri came to power in Argentina with the help of populist promises and a thought-out media campaign to discredit Kirchner with the help of corruption allegations. The change of power took place in Brazil in June 2016 as a result of a well-orchestrated impeachment of President Dilma Rousseff. Her impeachment was based on charges of violation of fiscal discipline that she supposedly resorted to to improve her ratings prior to the election. Corruption accusations were also involved, although they were not substantiated. Dilma Rousseff left her office to Acting President Michel Temer, a neoliberal.

Obviously, former left-wing leaders had to pay the price for their US-independent policies. As for the current states of economic affairs, the newly arrived neoliberals will make them even worse. The Americans are good at manipulating and controlling media. Clarín group in Argentina and Globo in Brazil skillfully directed public opinion in the right direction. In Brazil, they bribed senators.

Washington started preparing a change of power in Brazil in 2009, when, according to WikiLeaks, the Americans conducted a series of lectures at a seminar in Rio de Janeiro. The lectures were read for prosecutors and federal judges from 26 Brazilian states and 50 officers from the federal police under the pretext to combat "money laundering." The "students" came not only from Brazil, but also from Mexico, Costa Rica, Argentina, Panama, Uruguay and Paraguay. In fact, the CIA lectured them on how to "destabilize unwanted governments by focusing on complaints about alleged violations committed by those governments, Brazilian political scientist Emir Sader wrote.

Noteworthy, Argentina was ready to impeach Cristina Kirchner too, but the change of power took place there legally. It is now clear that no one wanted to improve people's standards of living. All the promises that Macri and Temer gave could not become reality.

The economic situation in Argentina has deteriorated dramatically during the neoliberal rule. The third largest economy in Latin America remains in recession. The decline in business activity in July made up 5.9 percent, whereas GDP dropped by 0.5 percent, the World Bank reported. During 300 days, Macri's government cut 170,000 jobs in the public sector, TeleSur wrote. In Buenos Aires, poverty has increased by 13.43 percent in just five months, a study conducted by the Centre for Economic Policy of Argentina (CEPA) said.

Meanwhile, the National Institute of Statistics and Census says that 32.2 percent of Argentines (8.7 million people) were considered poor as of the second half of 2016. As many as 1.3 million people (6.3 percent), live in poverty. Macri's reforms to raise tariffs, VAT and abolish restrictions on the export of agricultural products have accelerated annual inflation up to 42 percent. The peso has collapsed by 65.2 percent (from 9.75 to 16.11 dollars per pesos). When Macri's started complaining that all the difficulties in the country appear as a result of Christina Kirchner's legacy, the latter replied: "If you do not like my legacy, then give it back."

In Brazil, the situation is even worse. The country is ruled by the illegitimate government, because the people had not elected it. Brazil's huge economy (7th in the world) continues declining for the third consecutive year: this year the nation's economy is expected to drop by three percent, according to the IMF. Alberto Ramos, a Goldman Sachs economist, wrote that "in the third quarter of 2016, Brazil's real GDP hit the level of the third quarter of 2010". Temer wants to freeze pensions and the minimum wage. The National Statistics Institute says that consumption is reducing, while exports fell by 2.8 percent during the third quarter. Unemployment stands at 12 million people, and budget deficits are rising. Corruption scandals do not stop: six ministers in the government of Temer have faced corruption charges.

Here is the icing on the cake: Argentine judicial authorities have expressed outrage about Brazil's refusal to cooperate in the investigation of money laundering cases and outflow of capitals of  President Macri to Panamanian offshore zones.

Neo-liberals work for the United States, not for their own countries

According to ex-Brazilian President Lula, Macri and Temer follow the vision of US policies. The neoliberals will destroy everything that the previous leaders of Brazil and Argentina have achieved before, Lula said during his November meeting with Cristina Kirchner. Lula has nominated his candidacy for the presidential election in 2018.

When neoliberals come to power, one should understand that they will work to please Washington, rather than common people. They allow US-based companies to privatize best national assets (Petrobras, pension funds in Argentina), they increase external borrowings in the US-based IMF and let US goods flow into local markets. They also do not have anything against US bases on the territories of those countries (in the area of the border between Argentina, Paraguay and Brazil).

Cristina Kirchner did have debts, but those debt were in pesos, because her government was borrowing on the domestic market. Macri, the new Argentine President, has considerably increased external borrowings. Argentina's public debt is growing, and the revenues that the country will make will have to be used to service the debt to the IMF. Brazil's public debt grows at the fastest pace in Latin America, Moody's rating agency said. As a result, depression in the two countries strengthens, laid-off workers commit suicides, the level of street crime grows, small businesses and most of the industry go bankrupt.

As a result of Macri's reforms, no one has rushed to invest their capitals in the Argentine economy. Trump came and stood up in defense of the American market. Macri came and opened his market. to the US. This is not a paradox - this an element of neocolonial policy to let the USA develop and grow at other countries' expense.