Argentina, think before you vote, or become another Ukraine

A little more than a month has passed since the moment when Argentina elected its new president - pro-American politician and neoliberal Mauricio Macri. His election raised tensions in the country in connection with an abrupt change in the political course. Today, Argentina hopes for Washington's help. Ukraine has been there and done that. 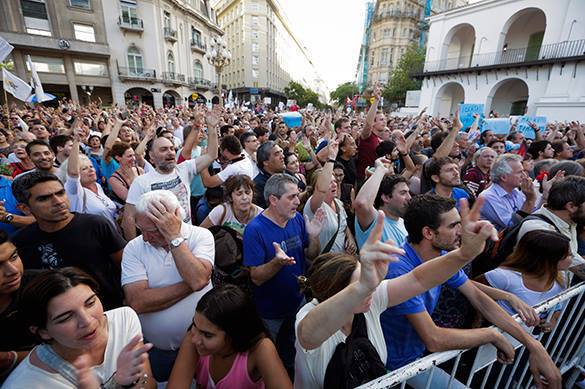 Macri was elected president of Argentina on November 23, 2015. The result of the election has left the feeling of discomfort with many Argentinians. All the pre-election neoliberal slogans that Macri was using are now hanging in the air. Living standards in Argentina have become worse after tough economic reforms, and 'democracy' has led to the suppression of dissent.

When Cristina Kirchner was in power, the Argentine authorities would speak to protesters. Today, they shoot rubber bullets and throw tear gas at them. This is how a peaceful demonstration against public sector layoffs ended on January 8 in the city of La Plata. Opposition journalists lose jobs as well. For example, famous journalist Victor Hugo was fired from Radio Continental.

It is worth recalling that Macri is a former mayor of the capital of Argentina. He is a large businessman, a graduate of the business school at Columbia University in the United States, a son of a prominent Italian businessman, whose family used to support the fascist regime of Benito Mussolini.

This may explain Mauricio Macri's authoritarian tendencies. Five days after taking office as president, he appointed two members of the Supreme Court without convening an extraordinary session of the Parliament, as required by law.

Macri made another illegal decision: he appointed a US citizen, Marcos Molina Viamonte, as a member of his secretariat. This suggests that the new Argentine president is a direct puppet of Washington to establish external management in the country. The next step will be to rehabilitate the politicians who were discredited during the military dictatorship.

Macri turned to Washington after the Kirchners made Argentina a sovereign state. They took the country from under the pressure of international credit funds and repaid the public debt. The last straw was the nationalization of oil company Yacimientos Petrolíferos Fiscales (YPF). When they say that the Kirchner government had poor economic skills, it's a lie. Kirchner was not taking the national economy on a neo-liberal way. She controlled the reserves of the Central Bank and paid for it.

The growth of the Argentine economy reached 90 percent from 2002 to 2010. Poverty and extreme poverty decreased by two-thirds. Today's Argentina is slipping into the abyss of totalitarianism and neoliberalism, even though the country has already been there before: Argentina learned the lesson during the 70s and the 80s.

What neoliberal reforms has Macri conducted already? He has lifted restrictions on foreign exchange transactions, sending the peso rate down by 40 percent and devaluing people's savings. He has canceled duties on exports of agricultural products, and food prices rose on account of more expensive imports. Marco has also announced cuts in social benefits and dismissals of state employees. As many as 12,000 employees have been fired in the province of Buenos Aires in the beginning of 2016.

Electricity tariffs will increase seven times after state subsidies on electric power are canceled. Prices and tariffs on public transport, natural gas and gasoline will rise as well.

Mauricio Macri does not have a majority in the parliament. For the time being, he can rely only on his own ideas, rather than on a strong parliamentary majority. As a result, the crisis in the country will be gathering pace.

Macri currently conducts negotiations with the funds that forced Cristina Kirchner declare technical default in Argentina. In 2005-2010, Argentina restructured $130 billion of debts, but several US hedge funds that acquired the bonds refused to do it and filed for 100-percent reimbursement of securities (in the amount of $1.5 billion).

A US court ruled that Argentina will not be able to service the restructured debt, unless it pays the funds first. Cristina Kirchner refused to pay in fear of a precedent, and leading rating agencies dramatically downgraded Argentina's investment rating.

Argentina may start living in debt, just like Ukraine did. The country will most likely start selling state property, reduce social security of the population and lose sovereignty. Inflation forecasts for 2016 make up 20-25 percent. It is unclear how the government will restrain the inflation if the peso is still plummeting.

Think when you vote.