US Sixth Navy stirs up another crisis in the Black Sea

The US Navy may increase the duration of its patrol operations in the Black Sea up to four months. In addition, the Americans will be able to increase the number of warships in the region should they find challenges in the region serious, US Navy Vice Admiral James Foggo said. 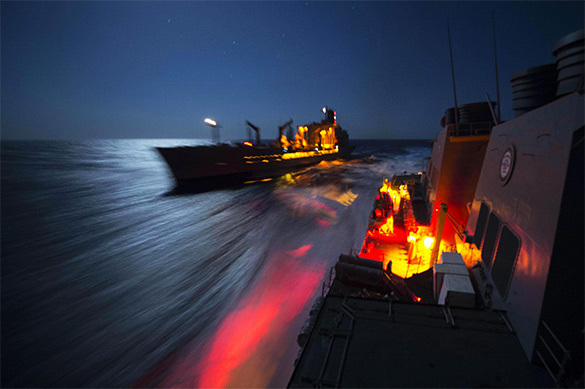 Currently, in accordance with the Montreux Convention, US Navy ships can not stay in the Black Sea for more than 21 days. The convention, adopted in 1936, strictly regulates the presence of non-Black Sea countries in the region. For example, US aircraft carriers are not allowed to enter the Black Sea.

It appears that the Pentagon has publicly declared its disregard for international rules. No country is allowed to single-handedly introduce changes in international laws. The USA is located too far from the Black Sea. Plus, the country is not a member of the Montreux Convention. US officials have repeatedly stated that the USA was not obliged to abide by its regulation.

Noteworthy, defense ministers of NATO countries discussed the moves to increase their military presence in the region at a meeting held in late October in Brussels. NATO representative Dylan White said that the alliance was changing priorities. According to the official, the alliance was going to concentrate on operations to counter illegal transporters of people in the Mediterranean. Additionally, he added, NATO would pay much attention to the "containment of Russia" in the Baltic and Black Seas.

Both NATO and the Pentagon are entitled to keep their warships in the Mediterranean and the Baltic Seas for as long as they like. As for the Black Sea, though, their opportunities are limited.

It appears that some people, who think of themselves as all-powerful individuals, are eager to change the convention. However, according to experts, it will be impossible to do it, because in this case, one requires to obtain agreement from all Montreux Convention members, which is impossible against the backdrop of the current political confrontation on the world stage.

During the time of the Soviet Union, its navy was dominating the Black Sea, and US ships did not risk to come too close to the shores of the USSR. After the Soviet Union collapsed, the balance of forces in the Black Sea region changed too. The US Sixth Navy felt almost at home there. From 2000 to 2015, NATO warships have entered the Black Sea 324 times, which accounted for 20 entries annually. In a nutshell, it means that NATO warships were present in the region permanently.

Today, the United States has its own base in Batumi, Georgia, a naval base in Constanta, Romania, where US Frigates and destroyers with Tomahawk cruise missiles on board go in the first place. However, it seems that the Americans need absolute domination.

A lot has changed since the start of the Russian-Ukrainian crisis around Crimea. Could anyone imagine before that the Americans would be simulating a large-scale landing operation near Odessa?

The United States may count on the implementation of the highly ambitious project of Turkish President Erdogan about the construction of a second Bosphorus channel. The project was first announced in 2011. It will be called Istanbul channel and will cost approximately $10 billion.

The technical and economic feasibility of the project was completed in December 2015. The new channel will be 43 km long, 500 meters wide and up to 30 meters deep. This will be enough for both supertankers and aircraft carriers to pass through. To crown it all, the Montreux Convention does not say a word about the Istanbul channel.

Ankara hopes that the new project will start working in 2023.

In the meantime, warships of the Russian Black Sea Navy and Bal-Bastion systems take all American ships entering the Black Sea in sights immediately.