Donald Trump still has not appointed two key people in his government - the Secretary of Defense and the Secretary of State. Yet, it is already possible to draw conclusions about the directions of foreign policy that Trump will pursue when serving as President. Trump's arrival to the White House heralds the end of America as the stronghold of the liberal international order. 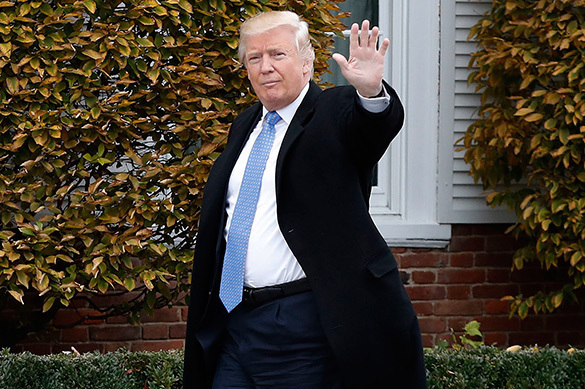 "America first" is not bad for Russia at all

The powers of the US president in foreign policy expanded after 9/11 attacks. Therefore, whatever they may say about the role of Congress that remains opposed to Trump, it will be up to Donald Trump to make most important decisions in the first place.

Trump's "America first" slogan brings back memories about the largest anti-expansionist movement in American history called America First Committee. The movement was a coalition of conservative and progressive business leaders who opposed the USA's entry into World War II.

Today, the liberal press, while drawing parallels between the beginning of the 1940s and Trumpism, believes that it will be hard for globalists to stop the advance of modern Hitlers. They, of course, allude to Assad, Putin, Marine Le Pen, Viktor Orban. For example, an article penned by Bernard Schalscha for La Regle du Jeu says that Trump's victory will untie the hands of dictators. Donald Trump, the author believes, has already released the forces that will not be curbed again.

Trump has repeatedly stated that he would like to improve relations with Putin. He wants to get along with Putin, but he rejects the idea of the reset of relations.

What can Trump offer Putin?

"Trump should immediately meet with Russian President Vladimir Putin and begin negotiating a comprehensive accord to settle all outstanding issues," Justin Raimondo wrote on antiwar.com.

As for the issues, the author indicates the following: lift US sanctions against Russia, pull back US troops from provocative military drills, shelve the missile shield in Eastern Europe, recognize the Crimean referendum, neutralize Ukraine and set up a US-Russian work group to resolve frozen conflicts in South Ossetia, Transnistria, Abhazia and Nagorno-Karabakh.

The author believes that Ukraine should be neutral, i.e. Ukraine should stay out of NATO, because the current Ukrainian regime is unstable, corrupt and remains dependent on the United States.

As for the Syrian conflict, Trump had meetings with Tulsi Gabbard, one of the candidates for the new US administration. Gabbard said after the meeting that she and Donald Trump talked about the ways out of the illegal war that the United States conducts in Syria to topple the Syrian government.

It is hard to believe that Trump would support members of the so-called "moderate opposition," who also serve as members of this or that terrorist organization. Trump has triggered the domino effect in America, and Western proteges surrender one after another. Russia and Syria will have a chance to finish what they are doing now: they will be able to destroy the Islamic State. Saudi Arabia, Turkey and Qatar will leave Syria alone too.

Given the fact that Trump has no experience in foreign policy, he will most likely rely on his advisors - at least those whom he trusts. The position of the National Security Adviser has already been taken by Michael Flynn - a supporter of the union between Russia and the US in Syria, former head of the US military intelligence.

In an interview with London Review of Books, Flynn said that his department was constantly sending secret reports to the US administration about terrible consequences that the toppling of Bashar Assad's regime would lead to. Flynn is one of the authors of the point of view that was  reflected in Trump's election campaign about the participation of Barack Obama and Hillary Clinton in the creation of the Islamic State.

Another politician, who has been appointed as the chief adviser, will be responsible for strategy of the administration. The position has been taken by Stephen Bannon, who is criticized in the USA for his "racist", "xenophobic" and "misogynist" views. However, one can see his vision of international problems too. Bannon supported Brexit and invited a senior official of the French National Front for cooperation.

As for cooperation with Asia, Trump said in a recent video address that the US would pull out from  the Trans-Pacific Partnership. He would sign the adequate decree during his first day in the White House as President. The TPP trade agreement was signed by 12 countries, which together account for 40 percent of the world economy. Trump's plans put an end to Obama's doctrine about the relocation of US interests in the Asia-Pacific region.

Thus, there is no signal to indicate that Donald Trump will not fulfill his pre-election promises.