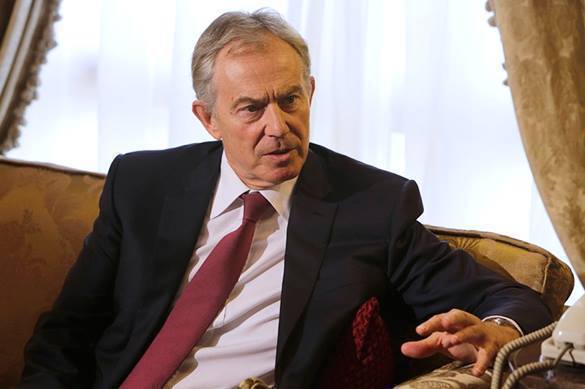 The banners and placards outside London's Queen Elizabeth 11 Conference Centre - where the findings of the seven year awaited Chilcot Inquiry in to the Blair government's illegal and catastrophic invasion of Iraq were to be revealed - reflected an anger undiminished since maybe two million people marched against the war in the city on 15th February 2003. Thirty six million are estimated to have demonstrated across the world.

On "Chilcot Wednesday", 6th July, as Sir John Chilcot's findings were awaited the fury still directed towards Tony Blair for the commitments he had made, unknown to Parliament, to George W. Bush and for the lies in documents giving the excuse for war under his watch, were palpable.

Time to pay for crimes

Two figures with Blair masks and bloody hands walked through the crowd, followed by two "Judges" in full formal regalia and wigs, past signs held high: "Blair, now is the time to pay for your crimes", "Justice for Iraq, The Hague for Blair", "Tony Blair 'Peace Envoy' - What an oxy-Moron" and referring to Blair's fantasy that Iraq had weapons of mass destruction which could hit the West in "forty five minutes" there was: "Forty five minutes from Truth and Justice?"

Nicholas Wood, author of the meticulous book: "War Crime or Just War? The Case Against Blair", had designed a thirty foot long banner with "Blair Must Face War Crimes Trial", which was unveiled to the media outside Blair's house at London's 29 Connaught Square at 7 a.m., to greet Blair as he left for the Inquiry.

For a man holding integral responsibility for the ongoing deaths of probably now well over two million souls, so terrified that he has round the clock protection of 20 police officers - paid for by the taxpayer - it must have been a very bad start to his day of judgement.

Having ambushed Tony Blair, the banner was then then carried the mile-plus walk to the Conference Centre to further wide press exposure.

It was Green MP Caroline Lucas who gave the crowd the first hint of what might be to come. She had read an advance copy of the Summary of the Report since early morning. It was, she said: "Worse than your worst fears ... diplomatic routes had not been exhausted, intelligence was flawed" and those responsible "must be held to account", she demanded.

For a 2.6 million word document, ITV probably had the most succinct summarY of a tome which will be pored over for months and years:

*A memo also revealed that Blair promised George W Bush: 'I will be with you, whatever'

*An emotional Blair defended the war, saying he would make same decision again

The memo referred to, above, of July 2002 is extraordinary. The first sentence: "I will be with you whatever", reads as if the beginning of a love letter. But then some will remember: "We pray together ... we use the same toothpaste."

He then advises the US President on the importance of planning, pointing out that the planned carnage: " ... is not Kosovo. It is not Afghanistan. It is not even the Gulf War." How casually massacres in three countries are simply dismissed - including the US'1991 butchery and carnage on the Basra Road, the burying alive of Iraqi conscripts under US bulldozers, erased by Blair.

"Getting rid of Saddam is the right thing to do", Blair assured Bush. The towering illegality of such an action not even a consideration. Astonishingly Blair admits that Saddam Hussein: " ... is a potential threat" - not an actual one and: "He could be contained." However: "His departure would free up the region."

"Free up" for what exactly? Ram raids for oil, further expansion and theft of Palestinian lands by an occupying force now Saddam Hussein would no longer be remitting compensation to Palestinian families? Further expansions as in Syria to impose a client government and move in to the oil and gas fields - with an eye also on Iran, geographically next door?

Cynical? Ponder that Blair became Middle East "Peace Envoy" shortly after slinking out of Downing Street in 2007, spent most of his time when in the region in Israel, did not offer even a bleat of criticism of Israel's bombardments of Gaza - a besieged enclave with no army, navy, air force - in 2008-9, or the Commando attack on the peace and aid ship Mavi Marmara, in international waters, murdering ten in 2010 and further onslaughts on Gaza in 2012 and 2014.

However in 2009, Blair was awarded Israel's Dan David Prize, with a million $ cash bung, as: "one of the most outstanding statesmen of our era".

That now anyway seems a world away. After Chilcot, the families of soldiers killed in Iraq have vowed to sue Tony Blair for "every penny" (Independent, 8th July 2016.)

As Simon Jenkins has written (Guardian, 8th July 2016) "Blair emerges as other Iraq historians have already portrayed him, as a pathetic and self-regarding figure in awe of the transatlantic power. The most culpable participants in the story were his Cabinet colleagues (who) failed to do what they knew to be right and stop him."

"Blair renders his account for Iraq every day. He cuts a lonely and wretched figure. Seemingly scared of the outside world, he is imprisoned by armed guards day and night. He travels the world, living out of suitcases and hotel rooms, attended by a dwindling band of courtiers, sustained by shady friends and 'consultancies.' "