The situation in Syria has been worsening again. Bashar Assad's army has proved to be incapable of maintaining the success that has been achieved with the support of the Russian Air Force. Syria's allies suffer serious losses. At the same time, Turkey and Saudi Arabia demonstrate their confidence and willingness to sharply step up their actions, while Washington insists on clear time frames to reach a political settlement to the Syrian conflict. All of these factors can significantly devalue the success of Russia's military actions in Syria. 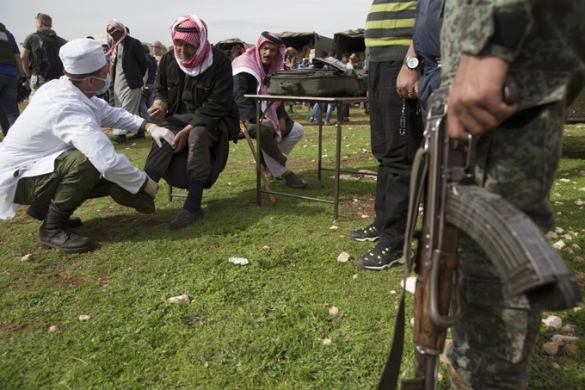 The liberation of the ancient city of Palmyra from Daesh militants marked the culmination of the success of the joint Russian-Syrian actions. Soon afterwards,  the Syrian command announced the preparation of offensive operations on other fronts, particularly in the Deir al-Zor and Aleppo, in a preparation to the liberation of  Raqqa ( the "capital" of the Islamic State, aka Daesh).

However, it all went wrong. Instead of active offensive operations, the Syrian forces found themselves constrained in Aleppo in the midst of fierce battles that claimed the lives of hundreds of civilians. The tragedy in Aleppo has attracted attention of  world media and politicians. As a result, the strategic plan of the victorious offensive was disrupted. Assad's army was once again involved in grueling fighting around major cities in different parts of the country and has lost the initiative that it has seemed to obtain after the victory in Palmyra. "The offensive potential of the Syrian army is completely exhausted," specialist on Iran and the Middle East, Igor Pankratenko, said in an interview with Pravda.Ru.

If this is the case, it just so happens that the real combat capacity of the Syrian government is quite low, and the efficiency of their actions entirely depends on the support of their allies: the Russian Federation, Iran, and Hezbollah. Russia has already withdrawn much of its military contingent from Syria. Judging from the recent developments, the country has stopped providing active military assistance to the army of Bashar Assad.

As for Iran and Hezbollah, they have suffered serious losses in Syria over the recent time. It goes about hundreds of victims, including commanders of elite units of the Islamic Revolution Guards Corps (IRGC). Hezbollah has lost one of its supreme leaders, Mustafa Badreddin, who was killed near Damascus. This is a huge loss for the group that may change its policy entirely.

Islamic State terrorist group looks a lot stronger again such a background. The Islamists have launched a counteroffensive. They have been successful in their actions near Palmyra as well as in other regions in the center of Syria and in the north, near the Turkish border, where they regularly arrange missile attacks on the neighboring territory.

A series of terrorist acts that have recently taken place in Turkey have given Turkish president the ground to say that the Islamic State has been targeting Turkey. Therefore, he believes, Turkey has a right to response. It is worthy of note the Turkey no longer mentions the Syrian Kurds. For the Turks, there is only one enemy now - the Islamic State.

Erdogan seeks maximum independence in the theater of military action in Syria. He has good chances to succeed because he has already made Europe believe  that  Turkey is the only guarantee to the solution of the refugee crisis. The flow of refugees to Europe has subsided indeed. Now one needs to convince the West of his ability to solve the problem of Syria in its entirety, including the liquidation of Assad's regime and the destruction of the Islamic State. If successful, Turkey will be able to become the guarantor of regional stability, with Syria as Turkey's vassal, like it used to be during the times of the Ottoman Empire.

If Turkey takes up all the work on the ground, the West will be happy to provide the country with support from the air.

Erdogan is not alone in his endeavor. Saudi Arabia has been persistently expressing its desire to participate in the Syrian conflict as well. The foreign minister of the kingdom has said that the country will send its military units to Syria only with the support from other countries. Until recently, the official was mainly speaking about the Americans, although now it appears that the Turks will suit as well.

Player number three could be Israel. The latter would be happy about Syria's role as Turkey's protectorate to open the road for signing a piece treaty with Damascus on the condition of alienation of a Golan Heights. On the other hand, these allies may likely find common language with Saudi Arabia on the grounds of their common opposition to Iran.

Thus, against the background of the weakness of the Syrian army, one  can see a real scenario of the Turkish-Saudi military invasion of Syria with the support of the West and Israel. It appears that the date has been set: August 1. Before this day, a political solution to the Syrian problem should be found including the creation of the interim government without Assad. This will be the ultimatum of the US administration and its allies.

Russia finds itself in a very complicated situation. There seems to be no initiative that Russia could take. Moscow will have to either make Assad  leave before August 1 or resume military operations in Syria. Can Russian shells hit the same place twice?