Russian troops leave Syria. Why now and what's next?

Russian Defense Minister Sergei Shoigu, following the order from President Vladimir Putin to withdraw troops from Syria, instructed to begin the operation to redeploy Russian air combat units to the territory of Russia from March 15, 2016. Against the background of the beginning of the negotiations on the Syrian conflict and the introduction of the cease-fire, Russia has been losing interest in the Arab republic. 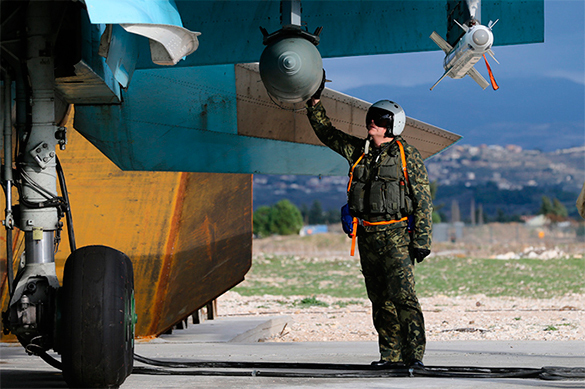 "The technical personnel of the airbase has started working to prepare the Russian aircraft for long-range flights to airbases in the Russian Federation. Equipment, material and technical means are being loaded on board military transport aircraft." the press service of the Russian Defense ministry said.

On March 15, Putin ordered to begin the withdrawal of Russian troops from Syria. The president explained that the Armed Forces of the Russian Federation had completed their mission in the Arab Republic. Yet, Russian army bases in Syria will continue to operate as usual.

Washington did not expect such a turn of events. Neither the White House nor the State Department were ready for substantive comments. Representatives of the departments only said that it would take some time to assess the further development of the situation.

Defense Minister Sergei Shoigu summed up the results of the Russian operation in Syria. According to Shoigu, Russia has managed to cease the supply of resources to terrorists and destroy more than 2,000 militants.

The Syrian troops have liberated more than 400 settlements and more than 10,000 km2 of territory with the support of the Russian Air Force. Since the end of September, Russian aircraft have conducted more than 9,000 sorties.

"As a result of the strikes, we have managed to stop the supplies of resources to terrorists and cease trade in hydrocarbons. The main routes to supply hydrocarbons, weapons and ammo to militants have been blocked," Defense Minister Shoigu told Putin.

"On the territory of Syria, we have destroyed more than 2,000 terrorists - natives of Russia -  including 17 warlords," Shoigu added, RIA Novosti reports. "We have also established control over oil and gas deposits near Palmyra - three large fields that have already started working as usual," the minister said.

Russian Foreign Minister Sergei Lavrov said that the operation of the Russian Air Force in Syria created the conditions to regulate the Syrian crisis in a political way.

It would be interesting to listen to many Western (and not only Western) "analysts" and politicians who were talking a lot about the purpose of Russia's military operation in Syria. According to them, Russia deployed its troops in Syria and started the operation for the sole purpose of saving Bashar Assad and his regime.

Dmitry Peskov, commenting on the most recent development, said that Russia was acting in strict accordance with international law.

"You know that the operation was conducted in strict accordance with international law. It was  performed on the basis of the request for assistance that we had received from the Syrian leadership," Peskov told reporters.

What will happen next? As we have already mentioned, the bases will not be shut down and Russia's military presence in Syria will be preserved.

With regard to supplies of military hardware and equipment to the government of Syria, the head of the Defense and Security Committee at the Federation Council, Viktor Ozerov, stated that Russia was not going to refuse from its obligations.

In any case, he stressed out, Russia will closely watch the situation in Syria and will be able to quickly strengthen its group there, should need be.

This is a fairly clear message to other interested parties not to let them fall into the temptation to try to solve the crisis by force.

"Such military anti-terrorist operations should be assessed by one criterion - their efficiency and strategic benefits for Russia. When President Putin and members of the Russian Security Council decided to deploy a limited contingent of troops in Syria to struggle against the Islamic State, numerous forecasts appeared saying that Russia would be mired in the conflict, that Syria would be Russia's another Afghanistan," President of the Russian Political Science Association Oksana Gaman-Golutvina told Pravda.Ru.

"However, the efficiency of the Russian-led operation and the consequences that terrorists had to face as a result of Russia's actions have shown that Russia has completed its strategic objective. Clearly, they will criticize the withdrawal of troops from Syria too, just like they criticized the deployment of Russian forces in the Arab Republic. Yet, such comments do not appear interesting against the backdrop of the international recognition of the efficiency of the Russian operation in Syria," the expert told Pravda.Ru