The Syrian armed forces with the support of its allies - Russian special forces, units of Hezbollah from Lebanon, Islamic Revolutionary Guards Corps from Iran and the Shiite militias from Iraq and Afghanistan - have achieved a landmark victory in the operation against the Islamic State terrorist group in Syria. They have liberated the famous ancient city of Palmyra from pseudo-Islamic fighters. 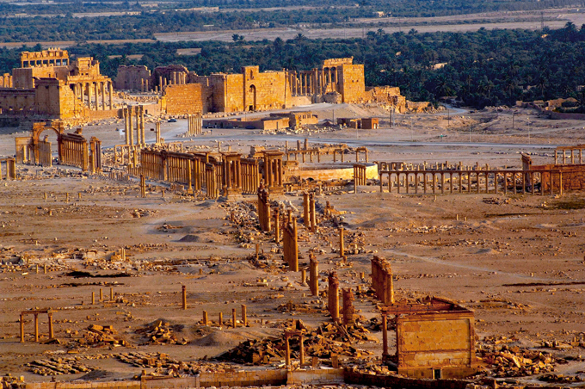 Vladimir Putin reacted actively to the victory. At the meeting with Security Council members, the president discussed the prospects and future plans. Putin called Bashar Assad and congratulated him on his great success.

The presidents of the two countries also discussed the problems that have arisen as a result of the looting of Palmyra and the destruction of its historical sites by Islamic State terrorists.

At a recent meeting of the FATF, the Financial Action Task Force on Money Laundering, one of the two major issues on the agenda was devoted to measures to prevent the use of stolen Syrian historical artifacts in the West.

Obviously, one will have to restore Palmyra. Putin has already spoken with UNESCO's Director General Irina Bokova. The Russian president also called his Iranian counterpart  Hassan Rouhani to discuss the problems that Syria is currently facing.

What is the significance of the victory of the Syrian armed forces in Palmyra?

There are two important aspects about this victory - the strategic and the symbolic one. Strategically, Palmyra is what the military call a bridgehead. There is a desert between  Palmyra and the base of the terrorists in Raqqa province. When the Islamic State seized Palmyra, the terrorists took their activities beyond the desert and started developing plans to conquer other territories.

The victory also has a very important symbolic significance. The fall of Palmyra last year became a symbol of the collapse of the tactics of the Syrian armed forces at that stage. The tactic led to the dispersal of Syrian forces to garrisons in big cities having thus given the initiative to terrorists. The latter could then choose where to strike another blow as most of the Syrian army was in their garrisons.

Russia interfered to take the initiative back and help the Syrian army revise its tactic. Today, it is the Syrian army that chooses where to strike the terrorists next. The Syrians make the militants rush about and relocate their reserves on the roads that Syrian forces successfully attack.

The liberation of Palmyra has marked a crucial moment in the Syrian war. The Syrians have seized the military initiative and they can now take efforts to ensure conditions for political reforms and negotiations during the truce with the militants.

It is important to understand that the truce is not a draw between the terrorists and the Syrian army. This is an outright victory for the Syrian military, the Syrian leadership, the Syrian president, and ultimately the Syrian people, who want peace in their country.