Trump employs advisers from Russia and Ukraine. That is terrible

Donald Trump feels like a presidential candidate from the Republicans at the elections in 2016. It is evidenced with his serious speech on the foreign policy issues. Trump rejects globalism policy and intends to find out how reasonable Russians are. Yet, he has his own business project in this respect. 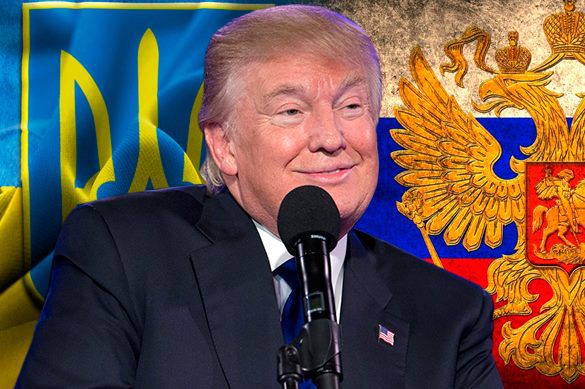 "Foreign policy of the US President Barack Obama is a disaster. No vision. No purpose. No direction. No strategy," odds-on favourite at the presidential post from the Republicans said. Trump defined rise of world disorder as major threat to the American security and interests, and he is right, the Wall Street Journal stated.

His words that Obama "dislikes our friends and bows to our enemies" also depict reality, the newspaper is sure. Trump criticized the US intrusion into Libya as part of the erstwhile Secretary of State Hillary Clinton. He believes it led to vacuum in the security sphere, that was filled with the ISIS. Trump promised to destroy the Islamites, but did not present a precise plan, saying that "they will disappear promptly".

"We're going to finally have a coherent foreign policy based upon American interests and the shared interests of our allies". "The world must know that we do not go abroad in search of enemies, that we are always happy when old enemies become friends and when old friends become allies. We want to bring peace to the world," Donald Trump claimed.

"Some say the Russians won't be reasonable. I intend to find out. If we can't make a deal under my administration, a deal that's great - not good, great - for America, but also good for Russia, then we will quickly walk from the table," the politician said.

Leader of the Republican primaries criticized allies in Europe and Asia, which don't bear the burden of their own security, and said that he didn't plan to accept advice from the foreign policy elite, and that his agenda reflects a mix of ideas of the Conservatives from the Republicans to Democrats.

Trump's speech "drew negative reaction across the political spectrum," the New York Times, a mouthpiece of the Democrats reacted. The newspaper cited a Senator Lindsey Graham, Republican of South Carolina, who posted on Twitter that "Ronald Reagan must be rolling over in his grave" after such talks.

"He's casting these thunderbolts and threats at our allies, and yet there was almost a kid-glove treatment of Russia and China," Nicholas Burns, a former senior State Department official under Mr. Bush who now advises Mrs. Clinton, noted.

The Republican mouthpiece Washington Post keeps up with the critics too. He read "his 40-minute address from a teleprompter without his usual bombast and with relatively few off-script interjections," the newspaper sneered.

Trump rejected globalism as a "false song", which helped to bring America down to its knees. He made the President Obama responsible for chaos in the Middle East, rise of China and "hostility" of Russia, along with a range of international humiliations, which dropped respect of the US authorities.

Donald Trump promised to reconsider relations with international institutions and alliances given their service to the US interests. The newspaper noted that this time he didn't have any shocking statements about Mexico, Muslims and so on.

"Trump's advisers have now set their sights on reforming the billionaire's image with establishment Republicans and moderate voters who remain skeptical that he is prepared for the presidency."

it should be noted that despite calls to peace, Trump will find what to feed the American military-industrial complex. He promised to modernize nuclear arsenal, the Navy and Air Forces. "We will spend what we need to rebuild our military. . . . We will develop, build and purchase the best equipment known to mankind."

"The central motif, like all of Mr. Trump's political thought, is that the businessman has the brains and strength to solve a given problem, and everybody else is a pathetic loser," the Wall Street Journal noted.

"I am the only person running for the presidency who understands this and this is a serious problem. I'm the only one - believe me, I know them all, I'm the only one who knows how to fix it," the newspaper cited. And here are some readers' comments under the article in the Washington Post.

- I am afraid to death of Trump. Every sensible American should be afraid of him.

- Protectionism and isolationism are awful ideas, especially after we have scarcely escaped the Great recession.

- I don't support Donald Trump - he is an out and out racist - but he's right about "globalism" and fact that it's gutted American manufacturing, resulting in massive unemployment -- he and Bernie Sanders both understand this. Hillary Clinton talks about "jobs" - but has yet to say a single word about how she'll create them. Unless she begins to see and talk about realities most Americans are living with today, she will not know what hit her in the election.

- Good speech from Trump. He is correct that the nation-state is still the primary actor on the international stage. International institutions have not, yet, taken sovereignty away from nation-states, and nations will continue to place their vital interests first. As they ought to.

"America should think not of peace, but of itself"

"Trump places the American problems first today. The US should think not of peace, but of itself, that's the main thing in his policy. I'd call him an American nationalist," Vladimir Vasilyev, chief research scientist at the Institute for US and Canadian Studies told Pravda.Ru. After each victory at the primaries, they wait Trump starting adjusting to the highest ranks. But it doesn't happen, the expert noted.

Trump speaks more and more consecutively that his presidency will put an end to the previous policy, which has lasted for 20 or 25 years after the end of Cold War. Namely this generates complete rejection of Trump in the American establishment and fear of him.

The expert believes that authorities of the Republican and Democratic parties are in horror that if Trump becomes a President, he will start carrying out this policy. "That is why they put up such a harsh line of resistance," Vladimir Vasilyev pointed out.

"There exists such a notion in the US as "Washington consent" as we call it, these are centres which serve the foreign policy, and are supraparty to some extent. Trump stated the most terrible things for these centres, that he will engage other advisers, and he has already started doing it.

"In particular, his adviser on the Ukrainian issues is a political strategist who served the Party of Regions. And for Russia he took a person who used to be the Gazprom's adviser in Russia.

So, it's such a business approach, and we in Russia should take his words at face value. It's an attempt to change America, and it will be undertaken. Trump will try to change a lot of things in case he comes to power," the expert concluded.

Author`s name Галина Тычинская
18:54
Ukrainian soldier uses chainsaw and fire to release US howitzer from ice trap
18:30
Onet: Ukraine will lose in six months due to shell shortage
14:17
Russians buy more than 50 tons of gold in 2022
13:34
USA's plan to give 20 percent of Ukraine for peace hoax
19:57
Russia will use all of its military potential to counter Western arms supplies to Kyiv
18:34
Biden changing strategy on Ukraine to reach diplomatic solution with Russia
17:36
Consequences of NATO's possible supplies of fighter jets to Ukraine get clear
15:16
Ukrainian forces suffer heavy losses while trying to cut across Dnieper
13:35
USA's next step is to suppress European economies
12:52
Victoria Nuland turns herself in about Nord Stream blasts
Medvedev: Ukraine as a state to be devastated, go bankrupt and be turned into colony