The committee investigating the death of U.S. Ambassador Christopher Stevens in Libya revealed serious violations in the work of the U.S. State Department, which caused the death of the diplomat. Three officers have already been dismissed, as well as Undersecretary of State for Diplomatic Security. Rumor has it that Secretary of State Hillary Clinton will resign in early 2013. 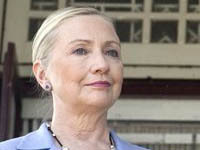 The U.S. State Department may see a major reshuffle of personnel. Hillary Clinton's assistant has already lost his job. According to independent analysts, the reason for that is the report from the special commission, which investigates the murder of the American ambassador to Benghazi, as well as attacks against U.S. diplomats in Libya. The report said that there were serious shortcomings and even failures in the activities of the Department of State.

The news of the death of the American ambassador Christopher Stevens and his three colleagues came as a shock to the world. The U.S. ambassador was killed on September 11th during the attack of Libyan rebels of the United States consulate office in Benghazi. The attack on the U.S. office was arranged by terrorist group "Brigade of the Followers of Sharia" and "February 17 Brigade." At first it was thought that the attack was provoked by controversial film "The Innocence of Muslims." The victim's diary found some time later. Stevens wrote in the diary that extremism in Libya was gaining momentum, and that it was not safe to stay in the country. In addition, he was worried about his own safety in Libya, thinking that Al Qaeda had already included him in its "hit list."

As noted in the report of the special committee, shortly before the attack, Stevens and his colleagues asked to strengthen security at the American consulate. However, the State Department did not pay attention to the requests of the diplomats, which eventually resulted in their death. In addition, the experts noted, the death of American diplomats was caused by disunity and poor coordination of work inside the U.S. State Department.

The commission's report states that it was local power structures that were responsible for the security of American consulate officials. Their skills have not been tested in practice. The diplomats' requests to increase the number of guards and strengthen security systems were simply ignored by the State Department, as there was no specific information about possible threats.

The investigation revealed that many State Department employees treated their duties negligently. Following the report from the commission, three officers have been dismissed, several others have received reprimands. Some publications claim that the next one to leave the big picture will be Assistant Secretary for Security of Embassies, Charlene Lamb. Another candidacy is an employee of the Bureau for the Middle East. It also became known that Deputy Secretary of State for Diplomatic Security Eric Boswell has been dismissed.

Some of world's leading media companies confirm the rumors saying that Hillary Clinton might also leave her post. The U.S. Secretary of State has not attended the public hearings for health reasons. The Chairman of the Senate Foreign Relations Committee, John Kerry, said that Ms. Clinton would be able to make a public appearance in January 2013. According to him, by that time, she will most likely leave the post of the Secretary of State. The top contender for the position is John Kerry himself.

Many politicians are at a loss. If State Department officials were aware of the danger for the U.S. diplomats in Libya, what prevented them from taking action? Republican Senator Bob Crocker noted that U.S. officials could not but know how dangerous it was to stay in Libya during the period of massive unrest. The protection of consulate offices from attacks conducted by Libyan extremists was the number one task, which officials successfully failed. Deputy Secretary of State for Management and Resources, Thomas Nides, stressed that the government must find those responsible and punish them to the fullest extent of the law.

In an attempt to justify themselves, some State Department officials say that the United States has always relied on the host states in ensuring the security of their embassies and consulates. Almost all countries of the world adhere to this practice. However, Nides noted, when every new day brings a new threat now, the United States can no longer rely on other countries in such issues.

The basic information on the activities of the commission, the circumstances of the ambassador's death remains secret. However, according to Thomas Nides, Hillary Clinton agreed with all conclusions that were made during the reading of the report.

Reportedly, Hillary Clinton has already given her staff the task to eliminate the shortcomings. She stressed that it was especially important for the Safety Bureau and the Office for the Middle East.

Hundreds of U.S. marines were hastily deployed in the countries with unstable political environment, where U.S. embassies are located to carry out the additional protection of embassies and consulates. The chairman of the commission to investigate the events in Benghazi, Thomas Pickering, said that State Department officials had received instructions before to strengthen security of U.S. embassies in troubled countries, although it led to nothing.

Two warships of the United States have recently arrived to the shores of Libya. Pentagon officials say that the ships have no specific mission, although some experts believe that the move is connected with the death of the American ambassador.

Either way, it is clear that the U.S. State Department experiences a serious crisis, although there are no positive predictions being made. Some believe that a new person on Mrs. Clinton's position will change the situation for the better.