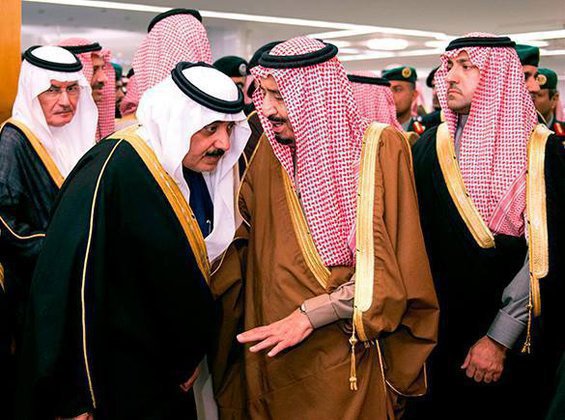 Article 55 of United Nations Charter includes: "Universal respect for and observance of human rights and fundamental freedoms for all, without distinction as to race, sex, language or religion."

In diametrical opposition to these fine founding aspirations, the UN has appointed Saudi Arabia's envoy to the United Nations Human Rights Council to head (or should that be "behead") an influential human rights panel. The appointment was seemingly made in June, but only came to light on 17thSeptember, due to documents obtained by UN Watch.

"... Mr Faisal Bin Hassan Trad, Saudi Arabia's Ambassador at the UN in Geneva, was elected as Chair of a panel of independent experts on the UN Human Rights Council.

"As head of a five-strong group of diplomats, the influential role would give Mr Trad the power to select applicants from around the world for scores of expert roles in countries where the UN has a mandate on human rights.

Such experts are often described as the "crown jewels" of the HRC, according to UN Watch.

One of the worst human rights records

The "crown jewels" have been handed to a country with one of the worst human rights records in the world. Saudi Arabia will head a Consultative Group of five Ambassadors empowered to select applicants globally for more than seventy seven positions to deal with human rights violations and mandates.

In a spectacular new low for even a UN whose former Secretary General, Kofi Annan, took eighteen months to admit publicly that the 2003 invasion of, bombardment and near destruction of Iraq was illegal, UN Watch points out that the UN has chosen: "a country that has beheaded more people this year than ISIS to be head of a key Human Rights panel ..."

In May, just prior to the appointment, the Saudi government advertised for eight extra executioners to: " ... carry out an increasing number of death sentences, which are usually beheadings, carried out in public"

Seemingly: "no special qualifications are needed." The main function would be executing, but job description: "also involves performing amputations ..."

The advert was posted on the website of the Kingdom of Saudi Arabia Ministry of the Civil Service.

By 15 June this year executions reached one hundred "far exceeding last year's tally and putting (the country) on course for a new record" according to The Independent (15 June.) The paper adds that the Kingdom is set to beat its own grisly, primitive record of one hundred and ninety two executions in 1995.

The paper notes that: " ...the rise in executions can be directly linked to the new King Salman and his recently-appointed inner circle ..."

In August 2014, Human Rights Watch reported nineteen executions in seventeen days - including one for "sorcery." Adultery and apostasy can also be punished by death.

In a supreme irony, on the death of King Salman's head chopping predecessor, Salman's half bother King Abdullah in January (still current decapitation record holder) UK Prime Minister David Cameron ordered flags flown at half mast, including at the Houses of Parliament and Westminster Abbey, leading one MP to question: "On the day that flags at Whitehall are flying at half-mast for King Abdullah, how many public executions will there be?"

Saudi, a country of concern

Cameron apparently had not read his own Foreign and Commonwealth Office Report citing Saudi as "a country of concern."

Reacting to a swathe of criticism, a spokesperson for Westminster Abbey responded: "For us not to fly at half-mast would be to make a noticeably aggressive comment on the death of the King of a country to which the UK is allied in the fight against Islamic terrorism."

The Abbey's representative appears to have been either breathtakingly ignorant or stunningly uninformed. In December 2009 in a US Embassy cable the then US Secretary of State, Hillary Clinton wrote that:

"While the Kingdom of Saudi Arabia (KSA) takes seriously the threat of terrorism within Saudi Arabia, it has been an ongoing challenge to persuade Saudi officials to treat terrorist financing emanating from Saudi Arabia as a strategic priority."

Moreover: " ... donors in Saudi Arabia constitute the most significant source of funding to Sunni terrorist groups worldwide ... engagement is needed to ... encourage the Saudi government to take more steps to stem the flow of funds from Saudi Arabia-based sources to terrorists and extremists worldwide."

At home women are forbidden: "from obtaining a passport, marrying, traveling, accessing higher education without the approval of a male guardian." (HRW Report, 2014.) Saudi is also of course, the only country in the world where women are forbidden to drive.

The country is currently preparing to behead twenty one year old Ali Mohammed al-Nimr. He was arrested aged seventeen for participating in anti-government protests and possessing firearms - the latter charge has been consistently denied. Human rights groups are appalled at the sentence and the flimsy case against him, but pointing out that neither "factors are unusual in today's Saudi Arabia."

Following the beheading, al-Nimr's headless body will be allegedly mounted: "on to a crucifix for public viewing."

What was that mantra issued unceasingly from US and UK government Departments in justification for blitzkriegs, invasions and slaughters in countries who "kill their own people"?

Numerous Reports cite torture as being widespread, despite Saudi having subscribed to the UN Convention Against Torture.

There are protests at Saudi embassies across the world highlighting the case of blogger Raif Badawi, sentenced to a thousand lashes - fifty lashes a week after Friday prayers - and ten years in prison for blogging about free speech.

Since March, Saudi Arabia has been bombing Yemen - with no UN mandate - destroying schools, hospitals, homes, a hotel, public buildings,  an Internally Displaced Persons camp, historical jewels, generating: "a trail of civilian death and destruction" which may have amounted to war crimes, according to Amnesty International. "Unlawful airstrikes" have failed to distinguish between military targets and civilian objects. "Nowhere safe for civilians", states Amnesty.

Further, the conflict ... has killed close to 4,000 people, half of them civilians including hundreds of children, and displaced over one million since 25 March 2015." There has been: " ... a flagrant disregard for civilian lives and fundamental principles of international humanitarian law (killing and injuring) hundreds of civilians not involved in the conflict, many of them children and women, in unlawful (disproportionate and indiscriminate) ground and air attacks."

It is alleged that US-supplied cluster bombs have also been used. One hundred and seventeen States have joined the Convention to ban these lethal, indiscriminate munitions since December 2008. Saudi Arabia, of course, is not amongst them.

Saudi was also one of the countries which bombed Iraq in 2003, an action now widely accepted as illegal. It is perhaps indicative of their closeness to the US that the bombardment of Yemen is mirror-named from the Pentagon Silly Titles for Killing People lexicon: "Operation Decisive Storm." Iraq 1991 was of course: "Operation Desert Storm".

Saudi is also ranked 164th out of 180 countries in the 2015 Reporters Without Borders press freedom index. All in all Saudi leading the Human Rights Council at the UN is straight out of another of George Orwell's most nightmarish political fantasies.

Oh, and of course we are told that nineteen of the hijackers of the 'plane that hit the World Trade Centre were Saudis - for which swathes of Afghanistan and region, Middle East and North Africa are still paying the bloodiest, genocidal price for the "War on Terror"- whilst Saudi's representatives stroll in to the sunlight of the UN Human Rights body.

On the UN Human Right's Council's website is stated:  "The Office of the United Nations High Commissioner for Human Rights (OHCHR) represents the world's commitment to universal ideals of human dignity. We have a unique mandate from the international community to promote and protect all human rights." Way to go, folks.