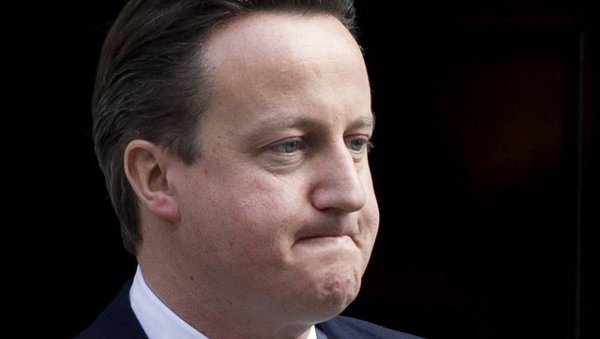 How desperately Prime Minister Cameron has been yearning to bomb the Syrian Arab Republic.

In August 2013 when his aim was defeated in Parliament by a 285-272 vote, his vision of the UK joining US-led strikes bit the dust. His dreams of illegally joining the bigger bully and bombing an historic nation of just 22.85 million people (2013 figures) three and a half thousand kilometers away, posing no threat to Britain, was thwarted.

The US threw a conciliatory bone to the snarling Cameron and according to the BBC: "would 'continue to consult' with the UK, 'one of our closest allies and friends.' "

"France said (that) the UK's vote does not change its resolve on the need to act in Syria.

"After the vote ... Cameron said it was clear Parliament did not want action and 'the government will act accordingly.' "

Chancellor George Osborne whined on BBC Radio 4's flagship "Today" programme that: "there would now be "national soul searching about our role in the world ", adding: "I hope this doesn't become a moment when we turn our back on all of the world's problems."

Translation: "Inconsequential politicians on small island only feel like real men when sending off their depleted air force to blow modest populations far away to bits."

The then Defence Secretary Philip Hammond: " ... told BBC's Newsnight programme that he and the Prime Minister were "disappointed" with the result, saying it would harm Britain's "special relationship" with Washington. Ah ha, that tail wagging, panting, lap dog "special relationship" again, for which no body part licking, no crawling on all fours, no humiliation, no deviation of international law is too much.

The excuse for the 2013 rush to annihilate was accusations that the Syrian government had used chemical weapons in March and August of that year, a claim subsequently comprehensively dismissed by detailed UN investigations.

Cameron's excuse for attack had all the validity of Tony Blair's fantasy Iraq weapons of mass destruction, but of course he regards Blair as a trusted advisor. Judgement, it might be argued, as Blair's, is not one of Cameron's strong attributes.

Then came the Friday 13th November tragedies in Paris and by 2nd December Cameron's parliamentary press gangs managed to threaten and arm twist through a vote to attack Syria in an action of shame which will surely haunt him as Blair is haunted by Iraq.

As the bombs fell, on 6th December, Cameron celebrated the anniversary of his tenth year as Leader of the Conservative Party with his very own military action, Libya's tragedy forgotten and belonging to yesterday. That, as Blair's Iraq, it is entirely illegal apparently bothers the former PR man not a whit.

As the Parliamentary debate was taking place, before the vote, it was reported that RAF reconnaissance 'planes had already taken off for Syria from Scotland - of whose fifty nine parliamentarians, fifty seven voted against the attack. Cameron thumbed his arrogant nose to near and far.

Apart from the illegality, did it even cross Cameron's mind, or did he care, that using the Paris attack not only defied law, it defied reason. To repeat again, the attackers were French and Belgian born, of North African extraction, with no Syrian connections apart from that some of them had been there joining the organ eating, head chopping, people incinerating terrorists. Syria is the victim, not the perpetrator, deserving aid and protection, not cowardly retribution from 30,000 feet.

After the vote, pro-killing MPs reportedly went straight into the Commons bar to celebrate with tax payer subsidized booze. Warned that the main doors in to Parliament had been closed due to anti-war protesters outside, one woman MP apparently shouted gleefully "It's a lock in." How lightly mass murder is taken in the Palace of Westminster.

Chancellor George Osborne: "eschewed the celebratory drinks ... and joined a carol service in nearby St. Margaret's Church - in aid of a charity for child amputees. You couldn't make it up", wrote a ballistic friend.

Within a week Osborne was in the US addressing the Council on Foreign Relations stating that with the air strikes Britain had "got its mojo back" and stood with the United States to "reassert Western values."

It was he said "a real source of pride" to have the authority for air strikes in Syria.

"Britain has got its mojo back and we are going to be with you as we reassert Western values, confident that our best days lie ahead."

Britain was prepared to play a "bigger role", he vowed.

"Mojo" according to varying dictionaries means "a quality that attracts people to you, makes you successful and full of energy", denotes "influence" and "sex appeal." The man needs help.

Immediately after the vote during a visit to RAF Akrotiri, the British base in Cyprus from which the airborne killers will take off to drop their human being incinerating ordnance, UK Defence Secretary, Michael Fallon, told military personnel that their mission had the backing of "both the government and the people of Britain." He lied.

A recent ITV poll showed 89.32 % of British people against bombing. Governmental "mojo" has clearly passed them by.

Pro bombing MPs though, it seems, are anything but warrior material. When angry emails arrived from their constituents condemning the bombing, the heavyweight Deputy Leader of the Labour Party, Tom Watson (pro bombing) complained of "bullying" saying stronger social media policy was needed to prevent such correspondence.

Anti-war campaigners had also sent graphic photographs of dead Syrian children to MPs to persuade them not to vote for creating more mutilated little souls. This, the warmongers said, was "intimidation."

One pro-war parliamentarian said the messages led him to have concerns for the health of his pregnant wife. Beyond pathetic, try being the husband of a pregnant wife, or the wife, in Syria with Britain's bombs incinerating your neighbourhood.

Another MP was so keen to become a member of the "bullied" club, she was found to have added a death threat to herself at the end of a justifiably angry email from a member of the public. Her attempt to was speedily uncovered. The desire to tarnish those repelled by illegally murdering others is seemingly becoming common currency in the Cameron Reichstag.

A majority of British politicians, prepared to drop bombs on people, blow their children, parents, relatives, villages, towns, homes to bits and are cowed by a few words. As for "bullied", try being under a bomb Mr. Watson, one of the bombs you voted for. "Bullying" doesn't come bigger than that.

Upset at being sent pictures of dead babies? Imagine being a mother or father holding the shredded remains of theirs. Courtesy the RAF.

Have they any idea of the reality of their "mojo" moment? People tearing at the tons of rubble that was a home, trying to dig friends, beloveds out with bare, bleeding hands?

Further reality is the demented, terrified howls of the dogs who hear the 'planes long before the human ear can, the swathes of birds that drop from the sky from the fear and vibration, their bodies carpeting the ground, the cats that go mad with fear, rushing from a loving home, never to be seen again. And the children that become mute in their terror, losing the ability to speak for weeks, sometimes months and even years.

This presumably was juvenile payback time for Corbyn having stated correctly that: "Cameron's approach is bomb first, talk later. But instead of adding British bombs to the others now raining down on Syria what's needed is an acceleration of the peace talks in Vienna."

Cameron also received widespread derision, including from Conservative Parliamentarian Julian Lewis, Chairman of the influential Defence Select Committee, for his claims that there were 70,000 "moderate" fighters on the ground ready to take on ISIS after British bombing.

One government source compared the claim to Tony Blair's fantasy that Iraq could launch weapons of mass destruction on the West "in 45 minutes." Lewis commented: "Instead of having 'dodgy dossiers', we now have bogus battalions of moderate fighters." Another commentator referred unkindly to Cameron's "70,000 fantasy friends."

Perhaps the best encapsulation of anger and desperation came from author Michel Faber, who sent his latest book to Cameron.

In searing sarcasm, he wrote in an accompanying letter that he realized: "a book cannot compete with a bomb in its ability to cause death and misery, but each of us must make whatever small contribution we can, and I figure that if you drop my novel from a plane, it might hit a Syrian on the head ... With luck, we might even kill a child: their skulls are quite soft."

He explained: "I just felt so heartsick, despondent and exasperated that the human race, and particularly the benighted political arm of the human race, has learned nothing in 10,000 years, 100,000 years, however long we've been waging wars, and clearly the likes of Cameron are not interested in what individuals have to say."