Brazil: From Lula to Dilma

The tremendous class and poise with which President Dilma Roussef, Brazil's first female President, received those who went to attend her taking of office ceremony at the Planalto Palace in Brasilia was a telling sign that here is a person ably prepared to deliver what Brazil and the rest of the world not only wants, but needs: More of the same! 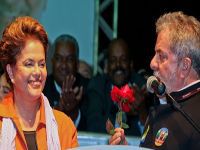 The fact that President Luiz Inácio Lula da Silva enters the final three months of his Presidency with a 79 per cent approval rating says it all. It therefore comes as no surprise that the transition within the PT (Workers' Party) from  President Lula to Dilma Roussef, now Brazil's first woman President, has run so smoothly as Lula's popularity overflowed to his Chief of Staff.

Lula's two-term Presidency was a wake-up call for Brazil, which has finally reached its potential and has occupied its rightful place on the center stage of international relations. Subservient to nobody, confident and righteous, in the last decade Brazil has developed externally into a major player on the international scene and internally, social programmes have lifted millions out of poverty and have done much towards implementing social justice in a sustainable development model.

Lula came from the people and governed for the people. In eight years, 30 million Brazilians moved upwards from poverty into the middle class and 19 million moved out of extreme poverty. 40 per cent of the poorest sector of the population increased their wealth by over three per cent.

Central to his policies were Bolsa Familia (Family Grant) through which 12 million poor families were given a monthly subsidy of between 12 and 117 USD per child; Fome Zero (Zero Hunger), expanding programmes launched by his predecessor, President Fernando Henrique Cardoso, the fruit of the creation of his new Ministry of Social Development and the Eradication of Hunger.

Great importance was given to helping small farmers to develop and a new irrigation scheme was set up in the arid interior of Brazil's north-east, while the Growth Acceleration Plan (PAC, Programa de Aceleração de Crescimento) strengthened infrastructure, creating jobs, bolstering the economy in a wide range of sectors.

Lula's sensible financial and economic policy saw Brazil pay off its debt to the International Monetary Fund two years ahead of schedule, saw the Sovereign Risk ratings plummet as the financial markets reacted, gaining confidence in Brazil, as the country grew in a climate of confidence and stability. Under Lula, Brazil passed for the first time from debtor to creditor.

Lula's two-term Presidency was not devoid of scandals but the fact is that he himself remained above any wrong-doing or abuse of influence and was quick to involve the Federal authorities in investigating corruption, and for the first time in its history, Lula leaves a Brazil where nobody is above the law.

Lula's external policy was equally successful, establishing Brazil not only as a major player in its geo-political sphere but also as a leader of the developing world, of Latin America, and on a wider stage, a power-broker in international relations, standing up for the precepts of debate, dialogue and discussion while others preached one thing and practised another.

Under Lula, Brazil stood for Latin American integration, forging closer relations among the MERCOSUR/MERCOSUL members, Brazil appeared as the mediator in the standoff between Venezuela and Colombia, assuming a leading role in the political crisis in Honduras and the humanitarian catastrophe in Haiti. Under Lula, Brazil deepened the relations among the BRIC members (Brazil, Russia, India, China) which is set to develop into a larger, massively powerful block including Iran, South Africa and Indonesia and possibly, Turkey. Under Lula, Brazil favoured a stance which favoured international law over hysteria and demonology (Iran's nuclear program) and led the developing world on a wide range of issues, from the environment to trading relations.

Under Lula, Brazil stood firm, defending positions which were not always popular with the EU or Washington and laying the foundations for an independent foreign policy gaining Brasilia much respect among the more reasonable members of the international community.

Lula could rightfully claim the title Man of the Decade.

Those who claim Dilma Roussef has little international or Government experience and that she substitutes Lula because she was his protégé, basically ignore the fact that due to her personal merits, she saw her approval rating soar from 30 to over 55 per cent, winning the Presidential election clearly in the second round. Dilma Roussef is Brazil's real-life Action Lady.

Coming from a different social background from the Trade Union leader Lula, the economist Dilma Roussef from an early age became interested in social causes and after the military coup in 1964, she became a political activist in social justice organizations such as Comando de Libertação Nacional (COLINA) and Vanguarda Armada Revolucionária Palmares (VAR Palmares). Although her participation was political, and despite never having been involved in actions which caused human casualties, she was captured, imprisoned and tortured by Brazil's fascist and repressive regime, supported by the USA.

In 2005, speaking about this period of her life, she claimed: "I am not going to hide what I was and I do not have a negative view of it...I have rather a realistic view of that period. I was 22 years old, it was another world, it was another Brazil. We learnt a lot. It doesn't have anything in common with what I think today".

Freed from prison, she was later co-founder of the Democratic Worker's Party (PDT) and developed a career first as municipal secretary to the treasury in Porto Alegre, then as Secretary of the State of Minas Gerais for Mines and Energy. In 2001, she joined Lula's PT, drawing up his Government's plan for energy before becoming Minister of Mines and Energy, in which capacity she launched the campaign Electricity for All.

Her success in this post, her organizational skills and her tremendous skills in negotiating with all sectors of society laid the foundations for her being nominated as Chief Minister of the Cabinet Office.

As President Lula's Chief of Staff, she was deeply involved with all aspects of policy making behind the scenes; indeed, President Lula called her "Mother of the Growth Acceleration Plan (PAC, Programa de Aceleração de Crescimento)" and since 2007, she has been groomed as Lula's successor.

Dilma Roussef is therefore excellently prepared to take over the Presidency in Brazil and with the political machinery of the PT behind her, it is a question of the same winning team gaining a new captain, a captain who beat an aggressive form of cancer of the lymph glands in recent years...one awesome lady.

If Lula is the Man of the decade, Dilma is the promise of the century.