Do not call them kamikazes! The kamikazes were a phenomenon unique in their kind. The kamikazes were soldiers who threw themselves deliberately and willfully to a death as sure as useless for the outcome of a war now lost, against a military enemy and not against defenseless civilians. 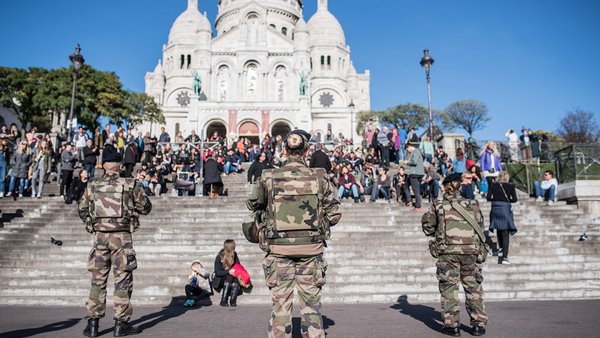 No samurai of ancient times would have committed a massacre of civilians busied to watch a football game, to listen to a concert, to walk to a market. If he did, his honor would be stained forever by this supreme act of cowardice.

Do not call them Muslims! Islam is not a religion that invites its followers to slaughter everyone else  as animals. As the Prophet of Islam taught: "Who will do harm to a non-Muslim will have myself as enemy in the Day of Judgment". The Quran is full of calls for peace, as in the Bible, in the Talmud and in the Gospel. If anything, in this case Islam is a martyr religion, offended in her being poisoned by the malice of a few who seek to pervert her at the eyes of the world, for vile economic and political interests.

So what to call them? Killers. Terrorists. Murderers. These are the names that deserve those who have massacred more than 120 people in Paris, a few days ago. Cowards. Poltroon. Without heart, honor, Homeland.

Total separation from God awaits them

Dead, they have found no paradise waiting for them but only the icy hell of total separation from God.

Why they have been chosen and sent, their own? Because someone has discovered that there are weak and malleable people that you can train to commit such bestialities. Now they are swept up among the followers of Islam but we are dealing with a method that was invented for a purpose and it is a method still in the process of aging. In the future, if necessary, they will be chosen even among Christians, among the Jews (maybe like the one that killed Yitzhak Rabin) between Buddhists, including those belonging to any religion that can serve the criminal purpose of the time.

Killers like these are a perfect weapon: determined to fulfill their mission, do not stop at nothing. They have no second thoughts and they self-destruct in to finish or they are slaughtered by security forces.

Because, you know,  when the police is not enough and the army is too much, you can always rely on the security forces. The performers die but then their identity cards, their passports, even videocassettes are found. It's true that all these killers want to be remembered by their admirers and future emulators but often is really as we are in front of an orgy of evidence and details, details that always arise in retrospect. In the later, Intelligence Service are getting their share but no one wonders why only ever after. What's the secret police if it cannot prevent events like those in Paris? Why provide it with powers different from ordinary police if it can do something only after the dead are numbered in the stacks?

These are questions that remain unanswered. How unanswered are the questions of who are the real instigators and the real terrorists' financiers, on where and how to find them. Or at least they have no answer for those who want neither know about nor really understand. It would be enough to look beyond the Atlantic, just to begin with, but also in some countries of the Middle East.

France has had a policy wavering towards the Syrian crisis, alternating the intention to stop fighting Syria to a fierce commitment in favor of the terrorists that are bloodying her five long eternal years long. There are many photos of terrorists employing Milan anti-tank missiles against Syrian troops. The Milan are manufactured in France. The Milan are not sold by the grocery store under your home and  cannot be sold by the armies who bought them as if they were candy. And then we can say that France has paid the price of his sad politics. This in the best case. At worst, it is instead treated to a black operation, false flag. There is a long tradition in the West about this type of operations and only time will tell us what fruits the future holds.

Certainly our doubts will be legitimate if it resumes the absurd mantra "Assad must go!" or you have to bomb Syria because its legitimate government cannot defeat terrorists. The French government will have a lot of courage to say such a thing but the current occupant of the Elysée does not shine for political stature. The times of De Gaulle are really gone.

I want to conclude these few lines with a final reflection.

Now throughout the West mourns the dead in Paris, victims of a horrible massacre. Broken lives, future deleted, tears and pain spread like the farmer sowing wheat.

Yet the hapless Syria suffer these things for five years and nobody in the West has ever torn off his clothes for the Syrian people and the sufferings that suffer for so long. Before Syria, this fate hit to Libya, that was once a prosperous Nation and now is destroyed by terrorists backed by NATO, after eight months of aerial bombardment. Before that, it happened to Iraq. No one in the West mourns deaths of these Nations, nobody in the West pray for the souls of their peoples. No one ever remembers the Palestinians of Gaza, even when they are targeted with phosphorus bombs by Israel.

No one in the West has lit candles on the windows to remember the dead of Russian flight crashed on the Egyptian Sinai. And they were more than two hundred people! Men. Women. Children. Indeed, their tragedy has been desecrated by a two-bit rag published in Paris who has dedicated them one of his umpteenth infamous cartoon.

For someone the dead are not all alike, but they belong to different categories. For someone, there are who die a little less than other.