Paris in state of war

Terrorist attack leaves 12 people dead and seven wounded, four in a serious condition. The attack was perpetrated by gunmen in the offices of the satirical magazine Charlie Hebdo, Boulevard Richard-Lenoir in Paris (XI). 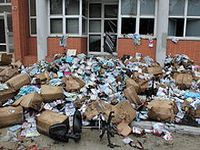 Two policemen are among the dead. Experts claim the two attackers were professionally trained and that the attack was well planned. They pulled up in the car, carried out the strike then swapped cars and sped off into the Paris traffic. Eye witnesses were quoted saying that they heard one of the attackers saying "We have avenged the honor of the Prophet". The men were reported to be wearing black hoods and were carrying Kalashnikov automatic weapons.

Charlie Hebdo had published satirical images of the Prophet Mohammed and anti-Islamic State cartoons. The day after the cartoons of Mohammed were published in November 2011, the offices were fire-bombed. The last Tweet on the account was a cartoon of Islamic State leader, Abu Bakr al-Baghdadi.

French President François Hollande stated that the terrorist attack was one of "exceptional barbarity", denouncing the "cowardly matter" of the attack. A police hunt is in progress.