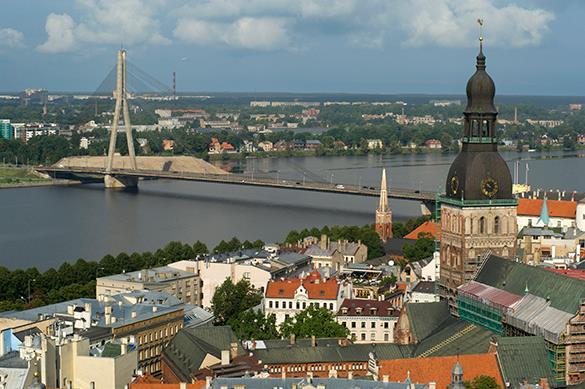 Latvia has been especially vigorous in its preparations for war. When the Academic Song and Dance Ensemble of the Russian Army named after Alexandrov came to perform in Latvia, Latvian officials panicked. This is not just an ensemble, but a unit of the Russian Armed Forces," Latvian Foreign Minister Edgars Rinkevics said. How can the Latvians understand the performance, if the ensemble sings in Russian? Another Latvian official, particularly the defense minister, is highly concerned about the problem of the Russian language in the Latvian army. Noteworthy, all this is happening in the country, where 250,000 Russian-speaking population are listed as non-citizens.

"In case of emergency, these people (non-citizens) will not be able to defend the state. How can they communicate with those with whom they will be defending the country?" Latvian Defense Minister Raimonds Bergmanis said on "Morning on Baltkom" show on Baltkom radio station. "How do you imagine the situation, when a person can not communicate during a fight?" he added.

It is not clear, however, why the defense minister was so sure that the non-citizens will be willing to defend the state, where they are officially referred to as inferior individuals.

Lithuania also banned the concert of the Alexandrov Ensemble. The Lithuanian authorities are concerned about the rebellion of vegetarians, who refuse to eat at army canteens. When asked to replace meat dishes with vegetable ones, Lithuanian army officials said that they would never do that. They referred to Harvard University researchers, who said that meat stimulates aggression in humans. This is exactly what soldiers need, Lithuanian defense officials concluded. Yet, recruits defend themselves by claiming that Lithuanian kindergartens make special menus for Muslim children in kindergartens, Sputnik news agency reports.

Preparing for war, Lithuanian scientific minds are trying to prove that their country is a sovereign state. The recipe to improve the image of the country is simple: one should remove the letter "h" from the English name of the country - Lithuania. What about the United States of Baltic? USB abbreviation does not need any introduction.

The authorities of another Baltic country - Estonia - are smarter. They allowed the Russian ensemble to perform. As for the Russian language, the Estonian authorities are fighting against it by introducing more subjects taught in Estonian at elementary school. However, when it comes to practical war preparations, the Estonians are not smart enough.

For example, in the town of Narva, where Russian speakers account for 80 percent of the population, a seminar was held on 6 November at the College of Tartu University. The seminar, developed by the Ministry of Defence of Estonia within the scope of "Sinu Riigi Kaitse" program ("Defend your country"), was conducted to form the positive attitude of the Russian youth of Estonia to the topic of Estonian national defense and raise young people's awareness and interest in politics. Sounds like a good subject to talk about, but it was Banderites, who were invited to lecture the Russian youth.

Interestingly, one can buy an interesting globe at Estonian shops. The Estonian globe is a round model of planet Earth that does not even mention Russia and Moscow. The Estonians may either like or dislike Russia, but they can not ignore the world's largest country.

The key national idea of the Baltic states is about the West. Latvia, Lithuania and Estonia eye the West as their hope and savior. Yet, they still live in the past, where they were "oppressed" by Russia. If the Baltic nations eradicate everything related to Russia, they will never become full-fledged European nations that are known for their tolerance for minorities.

Those who are no longer in power are well aware of what is happening in their countries. Former Foreign Minister of Latvia Juris Jurkans called the new initiative of the Baltic countries to seek compensation for 50 years of "Soviet occupation" a "madhouse."

"Today, the West does not like Russia and Putin, but Putin is the leader on the international arena today. Therefore, they now incite young boys to make some noise. Let citizens of Latvia think: what if they begin to count who had built what during the Soviet occupation. This is a madhouse! Latvia will turn into a madhouse!" said Jurkans.