Judas of Baltic States betray their own peoples and national interests 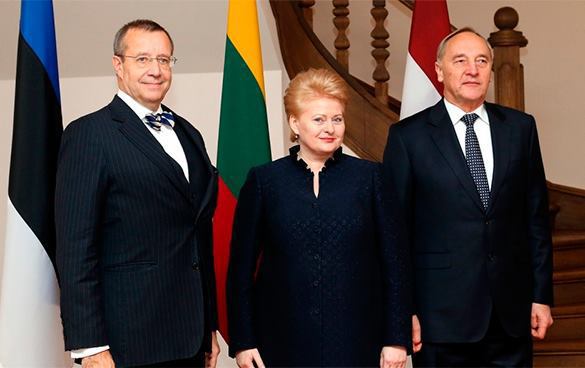 President of Estonia Toomas Hendrik Ilves became the first head of the European Union, who spoke in support of the arrested members of the infamous punk band Pussy Riot. In an interview with the Times, he said that the countries that called for the mitigation of sanctions against Russia were "Putin's useful idiots" inside the EU. What a lack of respect for colleagues in the European Union!

"Star in the making: Toomas Hendrik Ilves, president of Estonia. Suave, savvy and cynical, this Swedish-born, American-educated political heavyweight has returned from a big job at the European Parliament to put his pint-sized country on the map. Whether delivering the West's message to Mikheil Saakashvili of Georgia ("Misha: just shut the **** up"), charming George Bush, or hobnobbing with Carl Bildt, his Swedish foreign-minister chum, Mr Ilves had a flying start in 2006 and will be the ex-captive nations' best spokesman in 2007," The Economist wrote about the Estonian president.

In 2001, Ilves, whose native language is English, not Estonian, told The Wall Street Journal that he did not feel to be a Balt. "Who are they (the Estonians) to tell me how to feel?" he added. As a result, Estonian President Ilves is commonly known as an "American."

Mr. Ilves has a good rival to compete in the sharpness of visible psychosis - this is his Lithuanian counterpart Dalia Grybauskaite . The latter compared Russia's President Putin to Hitler and described Russia as a terrorist state. "There are Russian troops in eastern Ukraine now. However, the state [of Russia] completely denies it," Grybauskaite said. "That state moves in heavy artillery and vehicles, which are unmarked with state symbols. That state orders its troops to take off its insignia and to act without insignia there. Such a state has all the characteristics of a terrorist state," she said, adding that the aggressive behavior of the Russian aircraft in the Baltic States was "a manifestation of stupidity."

Why doesn't she call the Americans stupid and aggressive? American aircraft fly near the borders of multiple states and even bomb some of them. Grybauskaite measures the Lithuanian patriotism with the degree of hatred for Russia.

"But there is another part of the Lithuanian people, who do not believe that we should incite and encourage the conflict between the East and the West, - ex-minister of Foreign Affairs of Lithuania Povilas Gilis said. - They understand that Lithuania's forces in the clash of civilizations would be tiny. They fear that Lithuania may become only a pawn in a big political game. This means great losses in terms of national interests," the official added.

It appears that honorary professor of Georgetown University, Dalia Grybauskaite, is being perplexed as she can see Europe very much below the level of Lithuania.

The biography of the President of Latvia Andris Berzins does not say that he had been "processed" at western universities. At the beginning of his presidency, he was known as a pragmatist that favorably differed him from his predecessor, "Canadian national" Vaira Vike-Freiberga. The latter was known for saying that on May 9th, Russian veterans put vobla on newspapers, drink vodka and sing ditties.

When former Defense Minister Artis Pabriks started a spy scandal around Latvian schoolchildren, who went to Russian military-sports camps for holidays, Berzins said: "Maybe now we should prohibit traveling in general for all? Why are you getting to children?" Delfi website said. Noteworthy, a year ago, the President of Latvia was the only Baltic leader, who went to Sochi for Winter Olympics.

Frankly speaking, the head of Latvia turned out to be a coward. He became more cautious in his remarks about friendly relations with Russia after some members of the Latvian parliament questioned his presidency. The reason for such questions appeared after the Latvian President appeared at Gazprom's box at the stadium in Riga to support Dynamo Riga team.

Soon afterwards, Berzins switched to the rhetoric that was expected of him. He said that any attempt to call Latvian SS legionnaires criminals were absurd. "They (soldiers) found themselves in the German Legion coercively. They fought to defend Latvia. The Latvians in the legion are not criminals," the president said in an interview with the National channels.

Speaking of his Lithuanian counterpart, Berzins said that he considered Grybauskaite's remarks about Russia unacceptable for himself. Just personally, not generally. Sounds like a Swan Song.

"Those presidents are not citizens of their countries. They are citizens of the world, - French philosopher and writer Nicolas Bonnal told Pravda.Ru. - They are not the Balts - they are not Latvians, Lithuanians or Estonians - correct me, if I'm wrong. They are descendants of political or common refugees. They grew up or were raised in the Anglo-Saxon empire. Like old man Brzezinski, they dream to either destroy or dismember Russia. Local politicians of the 1990s, who were raised  in the Soviet Union, leave, and the new English-American elite comes to take their place, but this is not the Baltic elite."

According to Nicolas Bonnal, Estonian President Ilves is a living proof of that. "By strange coincidence, he holds a diploma in psychology (or mind programming). He, like three-quarters of European politicians, is an American agent, full of desire to start a war against Russia."

According to the writer, there are many of such traitors in Western Europe as well. "In France, there are so-called young leaders  who take a solid social position and sell our factories and nuclear power plants at low prices, opening floodgates to immigration.

There is another example. In Portugal, there is a man named Carlos Moedash (in Portuguese, his name means "money, coins"). He became a European commissioner and an insider at "Goldman Sachs". He currently organizes the resettlement of African migrants in Europe.

"This Judas is only one of many, and we would like to remind our Russian friends of that, who are not accustomed to such elites," Nicolas Bonnal said.