The relations between Latvia and Russia could not be called friendly. With alarming frequency Latvian officials make various statements accusing Russia of all deadly sins. The question of the occupation of Latvia rises before each election. Who benefits from it? Who wants to prevent amicable relationship between the countries?

On Wednesday the Latvian government announced that the Russian president should apologize for the occupation of Latvia. This requirement to Vladimir Putin was voiced by Sarmite Elerte, an advisor of the Latvian Prime Minister on national identity, integration and social cohesion. "Integration is a long lasting process. It would be good if by 2018 (100 years of founding of Latvia) all Latvians finally comprehended the events of the 20th century, understood their history and recognized the Soviet occupation. It would be a nice gift from the president of Russia to apologize for the occupation of the Baltic countries during the Second World War," Elerte said speaking at the First Baltic Channel. 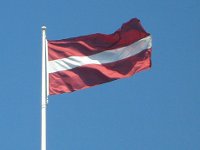 In December of last year, a special commission in Latvia once again engaged in calculating the amount of damages from the "Soviet occupation." The Baltic republic's authorities consider "occupation" the period when the country was part of the USSR. The Commission assessed the loss of the republic at hundreds of billions of lats. A special Latvian Society of the Occupation Researchers was created for these purposes. With support of the European Parliament, the society even published a book that details estimated damage to Latvia by the Soviet power. The book was presented on December 7th, 2012. The total amount of damage was estimated by the experts at 200 billion lats ($375 billion dollars). The researchers refer to the very negative effects of the militarization of the Latvian economy in the Soviet era.

"The state military order accounted for nearly 70 percent of the total GDP," said Ruth Pazdera, chair of the society. "Under the guise of civil order military products were produced at all plants. Following the collapse of the Soviet Union the equipment was taken to Russia, and our factories were shut down." The researchers noted that they did not intend to bill someone for the "occupation." "Let the politicians deal with politics. Our business is research," Pazdera said.

This is not the first calculation made in Latvia. Before that there were others researchers who used different methodologies. For example, one of the deputies of the Seim for the sake of simplicity suggested that Russia should pay $1 billion per year spent by Latvia in the USSR (about $50 billion). A more complex method of damage assessment was used by an official commission that in 2009 declared that the loss from the "occupation" amounted to over $18 billion dollars. The commission had been calculating damages from 2005, but in 2009 it was dissolved because of the crisis.

Janis Bordans, the Minister of Justice of Latvia, recently called for the resumption of the work of this commission. His suggestion was supported by the Seim. Latvia was annexed to the USSR in 1940. This happened after the entry of Soviet troops into the republic. This was followed by the elections won by pro-communist forces. The parliament formed in these elections authorized the accession to the Soviet Union. After the collapse of the Soviet Union the Baltic states began considering the Soviet period of its history "the occupation."

Russia does not acknowledge the fact of the "occupation" and considers the claims of the Latvian authorities for damages unjustified. This position was recently confirmed by Russian Ambassador to Latvia Alexander Veshnyakov. "Russia is not going to accept any bills for the alleged occupation. This is frustrating, and greatly complicates the relationship between the two countries," he said.

Qualified lawyers believe that it is impossible to legally prove the fact of the occupation of the Baltic states by the Soviet Union. On the contrary, they are firmly convinced that there was no occupation and all financial requirements of Latvia are unfounded. This was stated by Russian politician Vladimir Simindei.

Soviet troops entered the territory of Latvia, Estonia and Lithuania in accordance with the agreements signed by the legitimate governments of these republics. There was no armed resistance to the Red Army. "The activities of gorillas after the Great Patriotic War indicate partial resistance to the annexation. But compensation for the annexation cannot be obtained, and the authorities of Latvia and other countries talk about "occupation." Russia is not a successor of the USSR, but its continuation, although there is no continuity in terms of fault," said the analyst.

"It should be noted that the Latvian authorities have been planning their activities for quite a long time. They have been planning to organize a tribunal for the former Soviet Union, fully equating the Third Reich and the USSR, to condemn communism at the level of an idea and file financial, historical and moral claims against the Russian Federation", said Vladimir Simindei. From this it can be concluded that there was no occupation, and Russia does not owe anything to Latvia.

Veshnyakov is also very concerned about the anti-Russian rhetoric that is becoming increasingly more frequent as the municipal elections in Latvia approach. The Russian Ambassador to Latvia believes that Latvian society is "intimidated by Russia" on purpose. Many candidates nominated for the election make unfriendly comments with regard to Russia. The ruling party has traditionally been trying to consolidate the population by using the "occupation" theme. They seek to find those to blame and financially responsible for the country's past in the face of modern Russia, which gives them more votes.

Veshnyakov said that the current relations between Russia and Latvia cannot be called friendly. Steps like accusations against Russia during the referendum, statements of the secret police about Russia's interests in Latvia, inclusion of Russian citizens in the "black list" had their negative impact. Against this political background for the first time in three years a meeting of the intergovernmental commission was canceled. The joined agreement on simplified border crossing for residents of border regions and the agreement on the status of the real estate have not been put in effect. However, there are some positive developments.

The agreement on avoiding double taxation has been finalized, trade turnover has been growing, and the capitals are actively cooperating. The Ambassador believes that it is necessary to do everything possible in the future to avoid any issues between the parties.

A fight between the two countries is beneficial for some third party, Russian analyst Nikolai Starikov believes. Poor relations between Russia and Latvia bring no good to either country and cause unnecessary tension. For many centuries the countries have been coexisting peacefully. The answer is obvious: the U.S. and NATO are trying to block Russia's path to the sea, surrounding it by a chain of non-amicable countries. What should the two countries do? First of all, they should leave history to historians and sit down at the negotiations table to solve the existing issues. Amicable relations would increase the trade between the countries and allow implementation of joint projects.