Europe: The promised land, the land of refugees

The influx of refugees to the European Union continues and does not seem to come to an end. Military analyst, former head of "Nativ" secret service, Yakov Kedmi, told Pravda.Ru that the responsibility for this humanitarian catastrophe largely lies on the shoulders of Saudi Arabia, the USA and Qatar. The EU pays for the crisis, whereas Turkey is taking advantage of the large-scale tragedy. 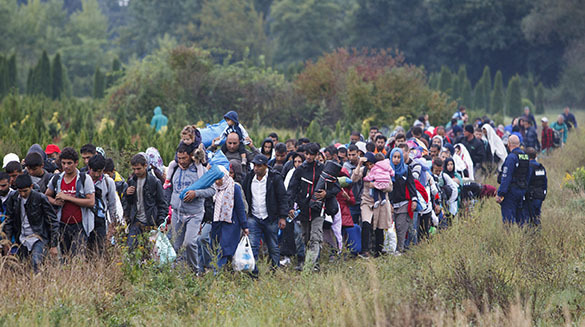 "What is happening in the Middle East and Europe? What do you think is the main reason for this sudden inflow of refugees? Allegedly, all Syrian refugees in fact come from many different countries."

"The flow of refugees started a little earlier and then intensified later during the year. This year, it became even stronger because of the collapse of Libya. Those were not refugees from the Middle East. There were fellow Africans, who suddenly discovered that after the destruction of Libya, the road to Europe was open. At first, they tried to go via Spain, but the Spaniards closed everything  through Gibraltar. When Africa went through Libya, it was Italy that took the blow.

"As a result of the very "intelligent and wise" policy of the United States and the European Union in the Middle East, Iraq was destroyed and the war in Syria started. The Islamic State emerged and then gained strength on the collapse of Libya before the organization started expanding and growing in Syria and Iraq.

"There had been many refugees before that. In Jordan, there were two-three million of them. A million of people fled from Syria as a result of the civil war.

"In total, there were around 15 million refugees in the Middle East - all those people stayed within the borders of their countries, but left their places of residence. They found that they could pass through Turkey freely. The Turks profit from this, as always. They profited on the creation of ISIS, when members of the terrorist organization were traveling via Turkey.

"Turkey profits from the sale of ISIS oil. Now they profit from the sea of refugees, selling them boats and other goods, putting them on ships before sending them off to Europe via Bulgaria and Greece.

"The amount of refugees reached the critical limit and exploded this year. Most Arab refugees come  from the areas occupied by Syrian opposition and ISIS. The Americans were fighting not only in Iraq. They were conducting a "super successful" war in Afghanistan for 13 years.

Arab refugees do not go to Arab countries

"Refugees are coming from Pakistan as well. To sum up, refugees are coming to Europe via Turkey from Afghanistan, Pakistan, a number of countries in the Middle East and from Africa. Africans travel through Libya to Italy. Mass migration of people is always a consequence of hard conditions in this or that country. Nowadays, people escape from the countries that have been destroyed, and the population of those countries started looking for other ways of settling their lives.

Also read: Syrian refugees do not want to go to Russia

"But there is an interesting peculiarity that we have here.The refugees that we can see flowing into Europe have money. It costs 10-15 thousand dollars to travel. Most of those people used to be well-to-do individuals, whose lives were ruined by the war. The true refugees, who have nothing at all, they are still there in refugee camps - they are not traveling anywhere yet."

"In fact, refugees are those who seek salvation, shelter and food in neighboring countries. The refugees that we see today - they all want to move to Germany. Are they just illegal aliens?"

"Refugees do not choose where to flee. If people escape, they just don't care. When people choose where to go - they are emigrants. They know that Germany and Scandinavia are best destinations. Some want to go to Sweden via Denmark."

"Is the situation going to aggravate?"

"If the destruction of the Middle East continues, the people who sit in refugee camps and new refugees will start moving. They do not go to Saudi Arabia or the Emirates - they all go to Europe. They want to live the way Europeans live."

"Why don't Arabs move to Saudi Arabia? This country is ethnically, religiously and geographically closer to them. This is a very wealthy country that has large camps for pilgrims."

"One needs to go there through the desert, and no one will guide them through it. The Turks come in handy - they take money and give them boats."

"The Italians help them move on to France too."

"Italy does not want to become a branch of the Central African Republic or the Congo. Italy is trying to get rid of those refugees at neighbor's expense. Yet, the main reason behind the current refugee crisis is the condition, to which the USA and the EU have taken the Middle East. Everything you do comes back to you.

"Primarily, it is Saudi Arabia, Qatar and principalities of the Gulf that are responsible for the crisis, along with the United States. They are watching the process from aside, giving recommendations."

"Western media began accusing Russia of this situation. Some even have come to the point when they regard Russia's assistance to Syria as support for the Islamic State."

"Of course, they blame others to whitewash themselves. The problem of refugees is the problem of those, who created it. The struggle against ISIS is just an excuse. In fact, the Turks are finishing off with the Kurds, the Americans and the Europeans are trying to overthrow Assad - no one is trying to crush ISIS."