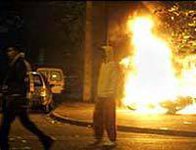 The influx of refugees from North Africa, engulfed in revolutions and wars, led to a major diplomatic scandal in the EU. France has decided to stop the trains running from Italy in order to not allow the flow of illegal immigrants into the country. Germany is thinking about doing the same thing.

This story has been going on for a couple of months. After the events in Tunisia, Egypt and Libya a little Italian island of Lampedusa became the center of Arab refugee placement. Most of the refugees are immigrants from Tunisia who are fluent in French. Many of them have relatives in France, therefore this country was a final destination for them rather than Italy.

The Italian authorities have repeatedly warned about the humanitarian catastrophe in Lampedusa, but their European counterparts were in no hurry to help. Apparently tired of fighting with the influx of North African visitors alone, a decision was made in Rome a few weeks ago to issue temporary residence permits to the Tunisians who wish to relocate to other countries. These documents would allow moving freely within the EU. In other words, using such measures Italians decided to export the undesirable elements into neighboring countries.

On April 17 a group of Tunisian refugees, accompanied by European human rights activists, was going to board a train in Italy and move to Marseille. The train was tentatively named the "train of honor." However, the move from the Italian border town of Ventimiglia to the French side did not take place. Prefecture in the French Alpes-Maritimes department has canceled all trains from Italy to Marseille.

The decision of the local authorities could have been voided by Paris, but it has not been. The French officials cited security measures. Indeed, protests of the refugees who wanted to get to France are ongoing in Ventimiglia. They are supported by the Italian and French defenders. The Italian and French police are together unsuccessfully trying to calm the immigrants.

The foreign ministries of both countries have exchanged statements. The French have declared "security measures," which infuriated their Italian colleagues. The Italian Foreign Minister has sent a protest note to Paris. Head of the Italian Interior Ministry Roberto Maroni expressed his outrage as well. "These actions are illegal and violate the fundamental principles of the EU", he stated, referring to the fact that the obstruction of trains violates the Schengen agreement on freedom of movement within the EU.

According to Maroni, the story of refugees has shown that there is no solidarity within the EU and they would have to look for a compromise at the EU summit on April 26. If a compromise is not found, Italy will be ready to return refugees to Africa. The Italian minister has warned that if no signals are received in the next few days, the country will proceed with forceful return of the refugees.

Meanwhile, the third "colossus" of the European Union, Germany, may join the dispute of Italy and France. The Germans and French were strongly against the plans of Italy to issue the refugees permits to allow free movement within the Schengen area. The Ministry of Foreign Affairs of Germany made it clear that it was ready to send humanitarian aid to North Africa, but was not willing to see Tunisians, Egyptians and Libyans on its territory.

Bavaria's officials had even a harsher reaction to the Italians' idea to distribute "Schengen passes". They have threatened to introduce border controls at the border with Austria (Italy does not border Germany) if the Italian authorities do not reconsider their decision. The Interior Minister of Bavaria Joachim Herrmann said that they would not tolerate the fact that the Italian government will simply declare refugees from Tunisia tourists and send them to other countries.

German Ministry of Foreign Affairs sent Italian Prime Minister Silvio Berlusconi a letter, urging Italy not to shift responsibility for refugees to its counterparts across the EU. They said that Italy had a strong navy and was able to cope with illegal immigrants. They added that Italy was large enough to accept as much as 23 thousand Arab refugees on its territory.

In general, the situation is reminiscent of political table tennis, or rather, the behavior of children from the nearby sandboxes throwing "gifts" left by animals at each other. Each of the pillars of the EU is shifting the responsibility onto others. Italy has a bad luck of being the closest to North Africa. France is clearly trying to somehow get excused for already admitting millions of Arabs into its territory. New waves of immigrants may simply undermine the country's foundations and complicate the socio-economic situation. Germany that also has many immigrants wants to stay away from these fights.

Together they may blame the European Union, whose leaders just keep silent. This shows complete inability of the EU to resolve the dispute between the countries - members of the organization, and to say anything about the problems of Arab refugees, affecting several countries. Meanwhile, the story with the refugees has already jeopardized two of the pillars of the European Union - open borders and European solidarity.

The situation continues to worsen. If now we are talking mainly about refugees from Tunisia, the second wave from Egypt and Libya is waiting to happen. The refugee crisis raises questions of how much longer the European Union will survive in its current form. The head of the Italian Interior Ministry Roberto Maroni warned that it makes sense to think whether Italy should remain in the European Union because it had not received its support in addressing the issue of illegal immigrants.

Head of the Department of European Integration Research Institute of Europe Olga Potemkina commented on the situation for Pravda.ru: "The situation is really complicated, and it is a serious test of solidarity for the countries-members of the EU. It is no accident that the European Commission called attention to it. Another problem is that most of those refugees in question are not political refugees but economic migrants fleeing from financial turmoil. No applications for political asylum were submitted by immigrants who came to Italy from Tunisia.

Thus, the current agenda includes the introduction of a restrictive regime with regard to these individuals. This issue was brought to the discussion, but so far, for objective reasons, the decision has not been made.

As for the EU, its position is tough, but understandable. Germany and France do not want a cascade proliferation of illegals across the EU. In addition, each of these countries has more immigrants than Italy.

It is hard to say who is right in this dispute - Italy or France. Regarding the latter, the ban on train travel with migrants will not save the situation. Even if France installs the border controls, according to the EU rules, it may be only temporary and, moreover, should be dictated by emergencies.

Italy is now negotiating with Tunisia to send home the citizens of the latter. However, the effectiveness of such measures in the fight against illegal immigration without funding from other EU members is highly questionable.

This is one of the issues that are likely to be discussed by the parties in April and June. The problem of illegal immigrants will be the central theme of the EU June summit. Perhaps the parties will decide to strengthen support for FRONTEX agency dealing with border control.

Of course, the issue of Malta that is suffering from an influx of immigrants no less than Italy will be discussed as well. It is not ruled out that political refugees could be placed in different countries of Europe. However, this process can only be voluntary.

Yet, the problem is not only how to make the EU countries accept refugees. The most difficult question is how to alleviate the plight of the Mediterranean countries, primarily from the influx of illegals, so they do not carry this burden alone. The emotions of Italians and Maltese are understandable. In this regard a major review of EU legislation is on the agenda.

The EU is now faced with a very serious challenge. Of course, the statement of Maroni should not be regarded as evidence of collapse of the European Union. However, the future of the EU depends on the solution of the current problems. Will it suffer an even greater crisis, or would the parties be able to find common ground to bring Europe to a new starting point for the development?

The events in North Africa demonstrated that the EU failed in its Mediterranean policy, as a result of which countries such as Malta and Italy have to struggle the most."