Australian newspaper The Financial Review called the current government of Prime Minister Tony Abbott a "sinking ship," on which "every man is for himself." On Monday, two ministers asked Abbott to resign and appoint internal party elections. Abbott will go down in history as a man, who wanted to shirtfront Russian President Putin, while eating raw onions in their without even peeling them. 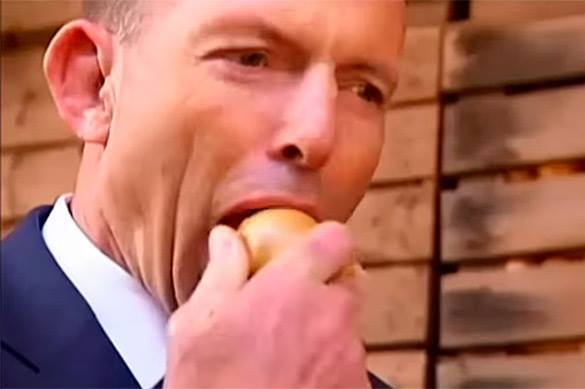 Turnbull has already resigned in a hope to take office as prime minister. According to Turnbull, Abbot has failed to secure the economic leadership of Australia. The unemployment rate, the debt and the budget deficit started climbing after two years of Abbot's stay in the office, the official said.

Tony Abbott has never been popular in Australia. After victory in 2013, his approval rating is about 30 percent. Abbott became famous worldwide for his promise to shirtfront Russian President Putin. Another outstanding achievement of his is the eating of raw onions in their skin at a farm in Tasmania.

Nowadays, a new hashtag #putoutyouronions has been gaining popularity on social networks. It does not look like a good way for Mr. Abbot to leave.

"Many people used to say that Abbott was a common guy who says straight from the shoulder. Now the Australians are looking for someone more sophisticated and someone more intelligent,"  Natalia Stapran, director of the Russian Research Center at Asia-Pacific Economic Cooperation,   assistant professor of Oriental Studies at MGIMO, told Pravda.Ru.

The expert believes that the current political scandal in Australia is a maneuver before next year's parliamentary elections, at which most analysts predict the return of the Labour Party to power.

However, this crisis is much deeper than just an act of the inner-party struggle, Natalia Stapran said. The crisis is connected with the fall of the Australian economy and the fact that the Australian government, instead of solving internal problems, is too much involved in the costly support of the US-led policy in the fight against ISIS.

The Australian economy, which is a resource-based and China-dependent economy, is suffering from declining prices on oil and other raw materials. This has led to a sharp decline in investment in the mining industry.

According to the Reserve Bank of Australia (RBA), the growth rate of the Australian economy has slowed sharply. RBA chief Glenn Stevens said that the "normal" GDP growth in Australia has fallen by 2.8 percent and it will fall 3.5 percent more to subsequently stagnate for five years. As it turns out, Beijing is not taking every effort to support the growth of the Chinese economy.

Against such a deplorable background, it seems unclear how the government of Tony Abbott decided to accept 12,000 Syrian refugees and provide 44-million-dollar assistance to 240,000 refugees in Lebanon, Turkey and Jordan with cash, food, water and blankets. Strangely enough, all this is being done at the time when Tony Abbott says that one needs to stop boats with refugees. Abbott also decided to join the coalition of the West to bomb ISIS in Syria and Iraq.

"Australia is an absolute ally of the US in foreign policy and security, - said Natalia Sapran. - This line is not likely to change with the advent of the new leadership. The United States pins great hopes on Australia. The United States plans to cooperate with Australia for the new security system. I believe that Australia will remain a bulwark of the US policy in the region. Australia will continue sending its troops for the participation in US operations. At the same time, Australia is a source of raw materials for China. It is hard for Australia to get off this hook," said the expert.

According to Natalia Sapran, one can point out three factors for the resignation of Tony Abbott. It goes about internal political instability, poor economic performance and low ratings. The expert believes that the political leadership of Australia will change in the near future.