Section 44 of Australian constitution precludes members of parliament from being a dual national. MPs must sign declarations for the Australian Electoral Commission stating that they are eligible under our constitution to stand for election to parliament.  I last wrote as a response to being labelled a birther which was a bit of a laugh for me. When I played rugby union many centuries ago, I was nicknamed Big Bertha because of my short stature, my weight, 115kg of muscle, and hippy hair half way down my back. Playing as a prop didn't help but encouraged those with wit to call me the Big Bertha. 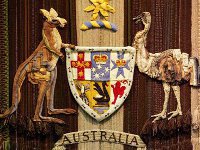 Since last writing I have been chasing the fabled documents which prove Tony Abbott has or has not renounced his British citizenship. The latest fiasco was a public servant working in Mr Abbotts Parliament House office promising to email details to me by yesterday evening.  I had been talking her about the information for the last ten days or so and she assured me approval would be granted and the information released to the world. Nothing.  Peta Credlin had stopped the media staffer talking to me.  At one stage during my talks with the PMs office my home and mobile phone numbers were automatically put on hold and the only way to get through to anyone was to use Skype and not give my name. Such is modern politics and the right of people to know.

The United Kingdom had quite a large shuffle of ministers recently, I don't know if my complaint about Mr Hague, who was then in the Foreign Office, blocking my FOI request to the Home Office had anything to do with it, but a lot of seats have changed.  The new Attorney General in the UK is the Right Honourable Jeremy Wright MP.  I have written to him to examine the documents in the Home Office which indicate if and when Mr Abbott renounced his British citizenship. I asked him to release the documents because it would be a shame for the UK to be tied up in a scandal of cover up and possible fraud.  I mentioned the last illegal Commonwealth of Nations leader would have been Idi Amin, a few Pakistan generals and maybe the Fijian military leaders of recent times.   There doesn't seem to be a precedent for someone not eligible for parliament being elected.  Even Mussolini and Hitler were elected legally in their respective countries.

Mr Wright a lot of Australian wrongs are in your hands and I do apologise for such a terrible word play.

Others to have received details of the possible problems with Mr Abbotts election are the Governor General, the Attorney General, the Australian Federal Police and the Australian Electoral Commission.   The only one to reply has been the AEC who have reiterated they can not ask people to prove their citizenship and must rely on the prospective MPs telling the truth when they sign the AEC declaration.  The AEC can not see beyond the citizenship question and notice that the prospective MP may have lied and signed a false declarations and thereby committed fraud.  The Hon Peter Heerey AM QC is the head of the actual Australian Electoral Commission and has been asked to ascertain if a fraud may have been committed.  As a QC it is his duty to follow up any allegations of fraud and ascertain if a crime has been committed. I believe staff at eh AEC have kept my communications from him, so I wrote directly to him and to his barrister chambers. Unfortunately he is on leave until the end of the month so any response form him will be a while coming.

I can only assume the Governor General is more intent on keeping his knighthood than he is on protecting the integrity of our constitution. No response from him or his office to any queries I have made.

The AFP. By far the cleverest political decision I have seen Tony Abbott make is to house himself in the AFP academy dormitory instead of any official residence. I was drinking mates for many years with a lot of AFP from and in that academy and I know they are at best reluctant in questioning anyone living there. If a murder has happened they will jump and police actively and normally but signing a false declaration would be the least of their considerations. Believe me every cop I have ever met is brilliant in their job, but sleep with them and things become a little blurred. Things do look blurred especially from the eyes of an outsider trying to question the activities of a person sleeping in the dormitory. My complaints to the AFP were lodged via their online complaints process for reporting possible Commonwealth crimes. Since there has been no response via that method  I have emailed the new Commissioner of the AFP Andrew Colvin, but again have not had a reply. I mentioned earlier my drinking mates, their email addresses are set out in a specific format, using that format to contact Commissioner Colvin was simplicity itself.

And now we come to the Attorney General, the Hon Senator George Brandis.  George Brandis was at Oxford with Tony Abbott and as some of the few Aussies there became very close friends. Being a part of the same political party and from the same rather extreme right wing of that party, means their friendship and political ties continue unfettered.  I contacted Senator Brandis in May, July and August before my email account was hacked and all emails removed and deleted and impossible to recover.  Thankfully the Parliament House computer system will have a copy of my emails to my Queensland senator and will also show no reply at all from him or anyone in his office.  I re-contacted the senator in September after he was on ABC television proclaiming he would uphold the integrity of law in this country.  I reminded him that the constitution was part of our law and there was a possibility of a member of parliament getting into parliament after fraudulently signing a statutory declaration for the AEC. Again no reply. Totally ignored.

I have lodged a complaint with the Queensland Legal Service Commission about the good senator possibly breaching the codes of conduct and moral requirements of a Queens Council in the state of Queensland.  That matter will be examined by the Law Services Commission and they will decide in due course.

There we have it. After 12 months of looking at the dual national born in the same year as I was and a few hundred kilometres south of where I was born, I am no closer to finding out the truth about the most important man in the country. The saddest thing may be that if he is in the job illegally the war with ISIS could be a case of treason. Anyone who causes a foreign state to wage war with the Commonwealth of Australia could be guilty of treason. Those poor service personnel sent into action may be fighting for all the wrong reasons.  Air Chief Marshal Binskin has been advised of the possible conflict and asked to do all he can to legally protect his troops.