I would advise Russia's President Vladimir Putin to wash his hands carefully and sterilize them after shaking the paw offered to him by Australia's Prime Minister Tony Abbott at the forthcoming G20 Summit in Brisbane. It is not about Ebola Virus Disease, it is about the disease called insolence and Australia's colonial chip on its shoulder. 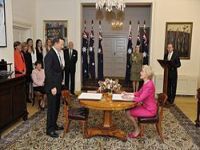 Thank God no Australian can be Head of State, that privilege belongs to Queen Elizabeth II of the United Kingdom, because judging by the arrogance displayed recently by its Prime Minister Tony Abbott, it appears the political class doesn't have what it takes. Talking about the fact that, according to ABC news agency, many Australians would feel upset at the Prime Minister shaking hands with President Putin, stating "I absolutely take that point", Tony Abbott displays a degree of insolence, arrogance and incompetence which mirrors the intrusiveness, belligerence and chauvinism inherent in other members of the Anglo Saxon alliance in NATO. You know, that global terrorist organization whose budget is a staggering one point two trillion USD a year, each and every year.

When Australia isn't busy crawling around the legs of its colonial master, England or trying to crawl up the anatomy of London's master, Washington, participating in their wars to pick up a few crumbs thrown Canberra's way, its politicians are busy kowtowing to Europe and the USA making stupid and unfounded remarks about Russia.

And apart from the hand-shaking insult (I seriously hope President Putin washes his hands and sterilizes them after touching the grubby paw of Abbott), we have another example of sheer crass stupidity, namely the statement that "Russia needs to fully cooperate in the investigation into the MH17 atrocity".

Russia, like every other member of the international community, condemned the downing of the civilian aircraft, expressed its deep sadness at the loss of civilian lives (including children) and like everyone else fully supported the international investigation into the horrific incident. So what exactly does Mr. Abbott mean when he insinuates that Russia has not cooperated fully with the investigation? Is he trying to say that Russia was responsible for the incident? Is he following in the footsteps of the Press of his colonial master, with their idiotic and slanderous headlines blaming "Putin"? Perhaps he would like to appear in the dock alongside them when the charges are brought, which they will be...

And now for other allegations and snide remarks from Abbott and other Australian politicians on both sides of the Party Divide about Russia's "behavior" in Ukraine, and those Australians who will apparently feel "extremely uncomfortable" at Mr. Putin's presence. Are they stupid, or what?

It was the Kiev-backed Fascists that committed massacres in the South-East of Ukraine, sparking the revolt of the population, not Russia. Do Mr. Abbott, those politicians who agree with him and the Australians they represent think it is acceptable to strangle cleaning ladies with telephone wire and torch a building with people inside, then jeer as burning bodies fall out of windows? Is this what Australia, its political class and people stand for? Why doesn't Abbott mention these atrocities in a balanced approach to the question? Either he is biased (incompetent for his position) or else uninformed (incompetent to hold his position). Why doesn't the Australian Opposition mention the truth as it obediently crawls behind Abbott's backside as he struts along the political catwalk?

It was the Kiev Putsch, not Russia, which removed the highest legal entity in force in Ukraine (its President), creating a legal void during which the Legislative Assembly of the Republic of Crimea voted to hold a free and fair referendum over returning to Russia and becoming part of the Russian Federation. Russia has since increased pensions for Crimeans three times, and instead of banning and outlawing languages and cultures, as Kiev has done, Russia has enshrined the rights and heritage of all the peoples living there into the Constitution. So, Mr. Abbott, those politicians who agree with him and the Australians they represent are in favor of suppressing cultural expression and languages, and therefore applaud what happened to Australia's aborigines?

This opinion piece in no way wishes to attack the good people of Australia who do not take Mr. Abbott's side, nor that of the other members of the political class, against Russia. One only has to look at productions such as Neighbors and Australian Master Chef. In the first, a production mirroring the image Australia would like to project to the world, namely a community-based family-oriented people helping each other out. In the second, we see this is not only a figment of the imagination but reality, because the judges are nice to the contestants and teach them instead of insulting them and making them feel inadequate, like some other Master Chef programs. This opinion is backed up by interaction with my many Australian correspondents.

This is the true Australia and it has nothing to do with Mr. Abbott. Or his political friends and cronies. Once again, we see a country whose political class is divorced from the collective will of its people yet we see a politician who thinks it is cool to be rude, insolent, insulting, impolite, impertinent, unpolished, gross, unpleasant and downright impudent.

Mr. Abbott does not represent Australia or Australians. Period.

Read the same article in Russian