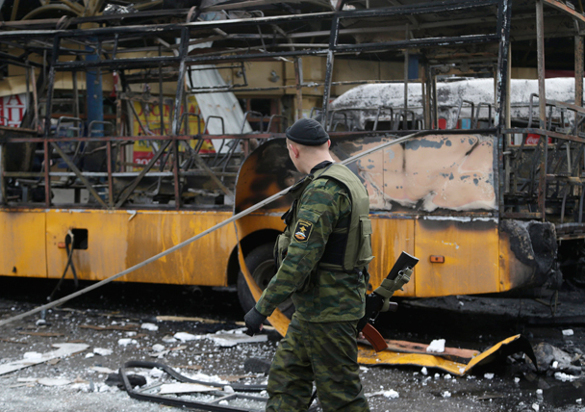 What is happening in the Donbass from the humanitarian point of view? According to reports from the correspondent of Pravda.Ru in Lugansk, humanitarian assistance from Russian convoys gets plundered before it is sold on markets. Why is this happening? Pravda.Ru interviewed Roman Manekin, an advisor at the government of the People's Republic of Donetsk, about the current state of affairs in the troubled unrecognized republic.

"Who governs the People's Republic of Donetsk? Our correspondent in Lugansk said that the Russian humanitarian aid gets plundered and then sold in the markets. The assistance from Rinat Akhmetov (Ukrainian businessman and oligarch) reaches the destination without any problems. Who is in charge of all that? In Lugansk, three companies that worked for Russia were closed last week. The companies that worked for Akhmetov still work, and no one touches or bombs them. What role does Renat Akhmetov play in modern power structures of Donbass and Ukraine? What does he do in the Donetsk People's Republic? Does he have parallel power structures?"

"There is such a trend to take a complicated problem and pose it up as a simple one - to point out an enemy and shift the blame on him, disregarding the whole complex of problems. In fact, the situation is really complicated, and it is different in the People's Republic of Donetsk and in the People's Republic of Luhansk, because their configuration and economic potential are different. The people, who find themselves in power, are different. In Donetsk, everything is much more serious, and Donetsk is the patrimony of Rinat Akhmetov.

"I've known Rinat for a very long time, ever since the days he was a treasurer of one group. We corresponded, I wrote to him that the group could capitalize the companies. Yet, as for his influence on the current events, I would not exaggerate that. Rinat Akhmetov, of course, does have ambitions - he wants to return to Donetsk. He does have social support, so to speak - the people whom he had tamed during the years of his unchallenged rule. I am absolutely convinced that all the explosions that have occurred during the recent days were conducted by subversive groups that feed from Rinat Akhmetov's resources. Yet, this is a totally different perspective than direct influence on power.

"You have to understand the fact that our power is limited. We control 31 percent of the territory of the former Donetsk region. On this territory, not all companies can operate, and those of them that work have been left without supplies from the territory of Ukraine.

"Akhmetov's main factories are located in Mariupol. Two bridges that lead to Mariupol, have recently been blown up. It became impossible to produce steel without ferroalloys. They used to be delivered by the Donetsk railroad. Now this is not possible. Accordingly, there is no need to capture Mariupol, because the city can not produce anything.

"Yet, Rinat Akhmetov acts, primarily in Moscow. In Moscow, there were people who are grateful to him. Among these people, there are former ministers, people of high rank. The situation in the economy in the republic is very poor, and it is even worse in the tax area. Most of the enterprises in the People's Republic of Donetsk operate illegally. Some of these companies belong to Akhmetov. For example, electric company DTEK that supplies electricity.

"Donetsk lives on the electricity that is produced by the power plant in Kurakhovo. There are Ukrainian troops there, and DTEK consumers are located in Donetsk. The manufacturer can not be registered in the DPR. We can, of course, disperse DTEK, it's a snap, but Donetsk will be left without electricity.

"The same situation is with mines and their customers. After all, electric power plants operate on certain types of coal. Coal can be produced, but can not be sold, people do not receive salaries for their work. Even if there is a war going on, we must somehow solve these problems, but it is very difficult to solve them, because Ukrainian forces bomb us and kill people every day, women, children and elderly. We see it every day, and we must supply coal to them?! Yes, of course, this is outrageous. But then emotions are gone, and you start to realize that this problem must be solved somehow.

"Still, we win, although it comes very hard. We liberate settlements. Yet, the situation is highly complicated. Our companies do not work, and if they do, then they pay taxes to Ukraine. We've been living without a budget for eight months. The primary source of essential goods is humanitarian aid that comes with so-called white convoys. The scheme is simple - one signs acts of acceptance, all legally. But this aid makes up only two percent of the needs.

"The humanitarian aid from Russia is not enough. It comes from a variety of sources, from different countries, from common people and public organizations. Akhmetov has his own network, and he hires saboteurs and creates subversive groups. We constantly neutralize them. For example, there was a garbage collecting vehicle that was traveling around with a mortar inside. They come, attack, kill and leave. Those people live here, they have to cling on to something, someone pays them and so on.

Akhmetov's real influence in the Donbass is now minimal. Akhmetov is an oligarch and an enemy. Everyone understands how he made his fortune and how he robbed people. His humanitarian aid is just a tiny fraction of what he had stolen. Still, his humanitarian assistance serves to meet his dirty needs.

All banks were removed from Donetsk, there is no bank that works today. All this is associated with Akhmetov, who owned everything in Donetsk. This, of course, was an order from Poroshenko. We do not have one single bank now. With great difficulty, we have set up the People's Bank, but this bank can only collect utility bills and it also tries to collect taxes - this is pretty much it.

"People used to live on wire transfers that they could receive from relatives. Now these payment systems do not work either. People do not have any source of income."

"What is your forecast for the new Peace Accords? How do you think the situation will develop?"

"Kiev troops bomb us day and night. In such circumstances, normal people do not think about some abstract matters. They think that they need to fight to defend their home. In fact, as for the talks in Minsk, I do not think anything about them. There is an objective socio-economic and political landscape. The Donbass is an integral region, which is based on the history of the Donetsk-Krivoy Rog republic. Until we restore our natural economic boundaries, no decision will be implemented, because everything that those officials say about us is far-fetched and divorced from reality."