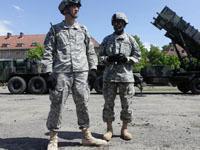 The meeting of the NATO-Russia Council at the level of Defense Ministers in Brussels did not result in any mutual agreements. The representatives of the alliance rejected the Russian proposal to establish a common missile defense system (NMD) and refused to give Russia any written security guarantees.

Russian Defense Minister Anatoly Serdyukov did not hide his disappointment after the meeting. "We have received positive and clear answers. Our fears were not allayed. NATO does not hear the proposals of Russia on missile defense at the moment. NATO insists on the creation of two independent systems. By 2020, Europe may build missile defense system which would eliminate Russia's strategic potential," he said after the talks.

According to Serdyukov, this situation is mainly due to the U.S. position. At the same time, he pointed out that "there are a number of countries that understand the concerns of Russia, and through them we can get some support." The Minister added that Russia would seek answers to new challenges from the West. "We have no other choice, otherwise the return to the arms race will be inevitable", he stressed.

In an effort to smooth the impression of the outcome of the negotiations, the Russian minister said that the talks would continue, and there is a potential for cooperation between NATO and Russia. Serdyukov spoke about joint military air exercise "Vigilant sky-2011" and maneuvers "Bold Monarch-2011" to rescue the crews of submarines as an example. However, his general conclusion was not promising: "The trust is there, but there are no results."

Also read: Russia to build own missile defense system from nothing?

Once the floor was taken by NATO Secretary General Anders Fogh Rasmussen, it became clear what displeased Serdyukov. "I said very clearly that NATO cannot ensure its security by the external sources. When a country enters into an alliance, it expects that the alliance will ensure its security, in accordance with Article 5 of the Washington Treaty," the Danish politician explained the refusal to create a joint missile defense system with Russia.

Rasmussen said that the dialogue with Russia on missile defense was developing naturally. Russia had its interests, NATO had its interests, and time is needed to find a mutually acceptable solution. The essence of the proposals announced by the North Atlantic Alliance is that NATO and Russia would create two independent systems of missile defense, but in order to improve their work they should share information.

In addition, Rasmussen said that NATO would not give Russia any legal assurances that missile defense alliance was not directed against Russia. "The best guarantee of Russia will be its participation in an open and sincere cooperation, which would reach the necessary level of mutual trust. He added that he gave an extremely clear signal to the Russian minister and the people: NATO poses no threat to Russia and does not see Russia as a threat.

It turns out that to some extent the masks have been taken off. Lack of legal guarantees that NATO missile defense will not be directed against Russia means that Russia should look for an antidote. If the situation continues to develop the same way, the Russian Federation in the coming years will be surrounded by U.S. missile defense sites placed in Poland, Romania (possibly Bulgaria). Rasmussen has made it clear: the North Atlantic Alliance will not give up their plans, and would not listen to Russia's objections.

"Ramussen's words mean that Russia should be prepared not for a "cold " but for a hot war," said in an interview with Pravda.ru military expert and senior vice president of the Academy of Geopolitical Problems, Konstantin Sivkov. "The West is pushed to it by the crisis of its civilization. The current crisis has exposed the fact that North America owes everyone - especially the "world factory" China and oil producing countries. And they do not want to pay.

There are two ways out for the West - to change their existing system and eliminate the financial oligarchy, or wage a war and use it to achieve debt relief. The purpose of this war is the pressure on oil producing countries and stopping energy supplies to China. Strictly speaking, this type of war is not conducted by NATO in Libya. To have an advantage in such a war, you need to develop your missile defense system.

NATO needs missile defenses on Russia's borders in order to put pressure on us to help neutralize the threat of our nuclear capability, tactical and strategic weapons. Cooperation from the perspective of NATO officials is required so Russia could give its technology and its missiles for the joint system, and the U.S. would practice in shooting down our missiles. The discussions on establishing a common defense is a complete nonsense. Americans would not do it.

The U.S. sees Europe as a part of its civilization, and therefore would never give it up to a Russian nuclear umbrella. It is a united post-Christian civilization, which has nothing to offer to the world - neither spiritually, nor economically. The West fears the growth of its main competitor - BRICS, and tends to split the union of Brazil, Russia, China, India and South Africa.

In the case of a global conflict involving the West and the countries of BRICS, it is very important on which side Russia would be. If it chooses to be on the side of BRICS it would create a single geopolitical, and partially nuclear field in Eurasia. If NATO is able to split the block, then there is no unity on the land and the sea is dominated by the West. Flirting with NATO will not give us anything. We must remember that deployment of missile defense in Europe is a purely anti-Russian concept."

"The U.S. and NATO were not originally going to build a joint anti-missile system with Russia," said in an interview with Pravda.ru military expert and deputy director of the Institute of USA and Canada Pavel Zolotarev. "Just a year ago a new concept of NATO was made public that had no mentioning of any joint missile defense with Russia. Furthermore, the establishment of such a system is in conflict with the fifth article of the Washington Treaty, which is the basis of NATO.

The concerns about Russia's war machine and the approach of NATO's defense to its borders are clear. However, the panic and talk about a new arms race and the Cold War would not be worth it. Keep in mind that some forces are keen to draw Russia into a large-scale arms race, to undermine our economic and other potential. And in response to the development of a NATO missile defense system Russia should not just mindlessly increase its military spending.

Yet, Russia has to do something. It should act on two fronts. The first is the military-technical front. We must remember that nuclear weapons are not weapons of war, but a tool for a political struggle, and we cannot invest solely in it (although we should not forget about it). The bet must be placed on the development of modern precision weapons, as well as information support for their actions. This is required by a current situation.

The second area is political one. We need to develop diplomatic activity to try to convince NATO partners of the need to postpone the deployment of one or another missile defense element, and enhance cooperation in a particular direction. The combination of smart investments in military-technical component and the systematic hard work on the diplomatic front can yield results."