Igor Strelkov makes an urgent appeal to the international community as western-backed Ukrainian forces slaughter Russian-speaking citizens, strafing women and children with military hardware. Washing, Paris and London look on and continue to support the Ukrainian government. A massacre is taking place, the west is dancing with the Devil. 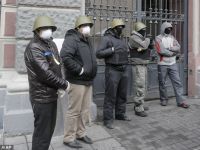 Yesterday, the enemy completely surrounded Nikolayevka. The enemy shelled the city in the fiercest possible way, using all types of weapons. Using heavy MLRS systems, howitzers, mortars, tanks, APCs. The destruction is enormous. It is simply impossible to determine the numbers of casualties, because nothing works in the city now.

Our units that are in Nikolayevka at this moment continue the battle in complete encirclement. We have no communications with them.

Nikolayevka has been completely cut off from Slavyansk. At this very moment, a large enemy column of armoured vehicles is moving toward Semyonovka from the south, along the Kharkov-Rostov highway. At the same time, the enemy is continuing uninterrupted artillery shelling of the city and of Semyonovka. Yesterday, the Nikolayevka Thermal Power Plant was destroyed to the ground and set on fire.

To put it bluntly, we are dealing here with unconcealed genocide. In other words, to break the resistance of the Militia, the enemy is using all the available types of weaponry against the civilian population. Naturally, seeing the destruction and the death of the civilian population, militiamen are starting to lose the will to continue fighting.

I would like to say to you that, in Slavyansk, there is not one Chechen, not one mercenary. There is not a single person here who did not come of their own good will. If, before, 90% of the fighters were local, now the ratio is 95%. Out of the entire garrison, there is maybe several dozen people who came from Russia. The majority, the overwhelming majority are citizens of Ukraine. Among them, the overwhelming majority are Donbass residents. These are people who consciously took up arms to defend their homes, their families, their Motherland. To defend their language and their culture. To defend Russia. Because these people never separated from her. They consider themselves Russian. They want to live in Russia.

This right was taken from them a long time ago. And now, when they tried to restore this right, Russia does not want to help them reunite with their people, with their big Russian family.

I do not claim that Russia does not help. A huge stream of humanitarian cargo, equipment, uniforms, comes to us through private channels. But, that, which we desperately need, does not, at this time, arrive.

Please understand, that even if we get two tanks, four, even ten tanks, five-six artillery pieces, even if a plane flies here once, this will have no impact whatsoever. Over the course of the ceasefire, the Ukrainian army performed full mobilization and concentration of forces.

Over sixty heavy artillery pieces are pointed at Semyonovka and at Slavyansk at this time. At Kramatorsk. Two dozen MLRS systems, including Grad, Uragan and Smerch. Heavy mortars. All of them are pointed here. The enemy has so much ammunition - I did not see so much in Chechnya. In our time, we did not have so many shells. And the entire set of this artillery is shelling us without a stop. The supply columns are coming in continuously. They are transferring in more equipment.

I am being asked to take on the responsibility for their death. And for the death of the Militia brigade under my command. We are ready to fight. We are ready to die. But we do not want to die senselessly, burying beneath the ruins of the city those people who believed in us.

Some believe that I am panicking, that I nervous. Yes, I am nervous. Every day, my soldiers are dying. The hospitals are overflowing with wounded. It is very difficult to see children without legs, torn apart by exploding shells.

We will continue to fight. But we desperately need help.

Translated from Russian by Gleb Bazov