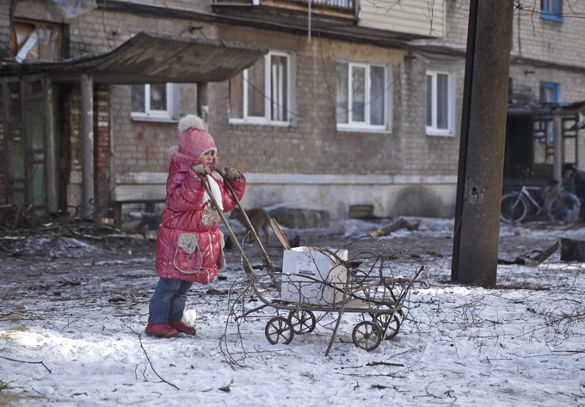 The war in the east of Ukraine has led to a large-scale humanitarian disaster. The Russian Emergencies Ministry and various foundations take efforts to help the Donbass, but this help is not enough. Small towns and villages remain in a deplorable state. Pravda.Ru had an interview with Russian Public Movement activists Nastasya Ivanova and Arthur Klimakov about the current state of affairs with the humanitarian assistance to the Donbass.

"You provide real humanitarian assistance to residents of Donbass. What are the prime goals of your mission?"

Nastasya Ivanova: The Russian Public Movement launched assistance a lot before the crisis in the Donbass began. When the Odessa massacre occurred, we were shocked. We started collecting aid for victims of the Odessa massacre. It was money for the treatment of burn injuries, for those, who suffered multiple fractures as people were falling out of windows on the ground. It was also money for lawyers.

"In July, when the fighting in the Donbass was unfolding, we sent a batch of medications and bandages. A Moscow hospital joined us - they sent resuscitation equipment, tubes, masks.

"Gradually, we obtained many contributors. They are mostly from Russia, but there are foreign contributors as well. For example, we have a Russian community from Switzerland helping us in this.

"In late October, we sent another batch of humanitarian assistance to Donetsk. We realized that all aid is shipped to the city of Donetsk. The rest of the Donbass gets a lot less. Many villages located on the front line receive nothingб so we started going to smaller towns and villages."

"The Russian EMERCOM continues to send huge convoys to the Donbass. Where do you think this humanitarian aid goes?"

"This is a lot of work, of course. The population of Donbass before these events was seven million people. Now many of them left, and Ukraine controls a half of the territory, although DPR and LPR keep biggest cities under their control. It is approximately 3.5 million people. If you divide a humanitarian convoy by 3.5 million people, you will see that all people can have a small piece of this aid only once. Even though the amount of the humanitarian aid from Russia is large, it is not enough."

"Pravda.Ru correspondents say that in Luhansk, for example, they sell Russian humanitarian aid on local markets."

"Why is this happening?"

Arthur Klimakov: "I can tell you what the locals told me. When a convoy arrives, it goes to institutions, such as boarding schools and kindergartens. However, there is a huge amount of individuals who are also in need of help. Pensioners have not seen any pensions for seven months already. We were also told that products from humanitarian convoys appear in shops, but people think so because, because those goods are made in Russia."

"So we are not talking about humanitarian aid here then?"

N.I.: "I do not know. People come to this conclusion because there are no Russian goods there officially. The border is not open enough. Importing goods at least for trade is difficult. Commerce would solve many problems. For the time being, goods arrive from the Ukrainian territory, despite all restrictions."

"Do they bring anything from Russia?"

"No, practically nothing. That's too bad, really."

"One more important thing about humanitarian aid. As I understand it, when our convoy arrives and sends it to local organizations, they do not always have enough resources to fairly and promptly distribute it among people. It is just hard for them to do all this, as they do not have complete databases on the population.

"It would be better if the distribution of humanitarian aid would be the job of the EMERCOM - they could open soup kitchens for the people in need."

"That would mean that EMERCOM employees should be stationed there to do all this work. Is there an alternative to the EMERCOM?"

N.I.: "I do not see any problem, if a humanitarian mission works there constantly. A mission of the International Red Cross can work there too. When we went to Lugansk, we met with young mothers there. One of them told us that she was very lucky as her relatives gave her a big bag of millet and a bag of chaff in summer. She was living on those two bags till January - that was all that she and her little children were eating. They did not even have salt. On New Year's Eve, the woman managed to buy bread. It was like a cake, she said. That is, there is no bread, no sugar, no tea, no butter, no milk - nothing. Money can not buy these products there. You can see people rooting through dumpsters.

"Only 30 percent of enterprises work in the Donbass today. Most people do not receive any salary. People become completely dependent on humanitarian aid. We talked to members of humanitarian battalion "Ghost" in Alchevsk. They recorded several cases of starvation, as well as several cases of hunger-motivated suicide among the elderly. There was nothing that people could eat.

"It's easier for those, who live in villages, because they can grow their food. For those living in towns, life is more difficult, because they can not grow anything themselves, nor can they receive help that goes to Donetsk and Luhansk."

N.I.: Donbass differs from Ukraine economically. This is a very urbanized region, the most urbanized one. The Donetsk conglomeration is like continuous metropolis, in which many settlements are concentrated. Luhansk is smaller but the structure is the same.

"There are agricultural fields there, of course, but it was impossible to collect harvest during the fighting."

"Why do civilians stay there? Why don't they leave?

N.I.: "They can not do it. It is impossible to evacuate several millions of people. Some do not want to leave, because this is their home."

A.K.: I paid a visit to a woman who is 80 years old in Luhansk. I brought her some food, and she is a veteran of the Great Patriotic War. She did not even try to hide when the city was being shelled. She had seen so many Nazi bombings, and she would not bow to a few gifts from Poroshenko.

"Many people fled from the areas of intense fighting. Today, many have returned, especially during the time of the autumn truce. Women would give birth to their babies in bomb shelters and basements. People try to survive."