The United Nations Organization has voiced deep concern over the situation in Yemen, where armed conflict, massacres by the US-Saudi-led coalition of murder and human rights abuses have caused at least 1,500 civilian deaths, 3,600 injuries and one million internally displaced persons or refugees in just three months. The hand behind the scenes? 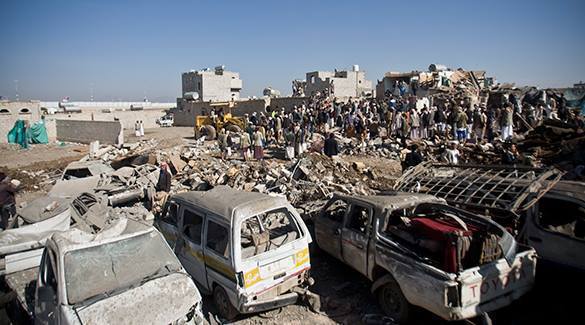 The coalition of evil

Mention the United States of America and Saudi Arabia, and what is the result? The result is the question, so where are Qatar and Bahrein? And the answer to that question is yes, they are all four of them involved, together with, who else? Kuwait, the United Arab Emirates... Jordan? Yes of course. Let's guess...Morocco? Yes, and then Egypt and Sudan. The Gulf Cooperation Council and the North African pariahs complete with their American bedmaster.

Doing what? Why, bombing indiscriminately and murdering women and children, as usual. So after Operation Decisive Storm finished on April 21, Operation Restoring Hope continued to select civilian targets, such as Sana'a International Airport, strafing the runway so that an Iranian humanitarian cargo aircraft could not land and UNESCO World Heritage Sites at the Old City in Sana'a.

Bitter clashes on the ground

On the ground, the different sides in the conflict (pro-Hadi Coalition and pro-Saleh/Houthi faction) have been involved in bitter fighting, which alongside the murderous strikes by the Coalition of Evil, have led to a humanitarian catastrophe in Yemen, affecting mainly civilians. The Office of the UN High Commissioner for Human Rights (OHCHR) has declared that between 17 June and 3 July there were at least 92 civilian casualties (including 18 women and 18 children dead) along with 179 injuries (including 43 women and 30 children). On top of this there are over one million displaced persons, either internally or forced to live as refugees abroad.

Human rights violations have been documented by OHCHR involving "all parties to the conflict", "including violations of the right to life, abduction, ill-treatment and attacks against humanitarian workers, journalists and media organizations" and additionally, "OHCHR has been closely monitoring attacks by the conflict parties against UN offices, citing an airstrike on 28 June that wounded one civilian and partially destroyed the UN Development Programme office in Khormaksar, Aden. The International Organization for Migration (IOM) was struck twice, once by a mortar in Basateen and again by an airstrike in Harad" according to the Organization.

The result of the violence on the ground and the inhumane terrorist airstrikes from the Coalition of Evil has resulted in a serious shortage of medicines as the country's healthcare network nears collapse and access to food and clean water is seriously reduced. For Jens Laerke, spokesperson for the UN Office for the Coordination of Humanitarian Affairs (OCHA), "Clearly, there is a massive humanitarian crisis...in Yemen."

And why is it that time and time again, the hand of the United States of America is involved wherever there is a humanitarian crisis?