USA and Saudi Arabia invade Yemen to defend their oil

Saudi Arabia, answering the call from Yemeni President Hadi, invaded Yemen. Huthis came out to the Gulf of Aden that raised very serious concerns in Saudi Arabia. The Huthis can take control of the Bab-el-Mandeb - the strait, on which tankers transport oil from the Persian Gulf to Europe and America. As soon as the military operation in Yemen started, oil prices soared. 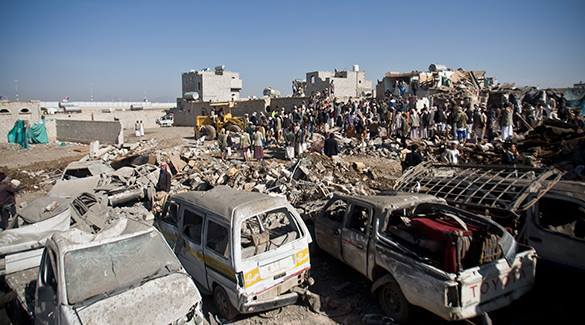 The Saudis, having used the threat from the Huthis, won the support of the United States for the operation against Yemen. Saudi Arabia has thus struck a mediated blow on Iran that supports the Huthis. The United States is unwilling to ruin its ties with Iran for two reasons. Obama has staked his reputation by negotiating the Iranian nuclear program. He also hopes for Iran's help in curbing the Islamic State in Iraq. Nevertheless, the ally (Saudi Arabia) insisted Obama should announce the "logistical support" for the invasion of Yemen.

Iranian broadcaster Press TV reports that in the evening of March 25, Saudi Air Force bombed rebel positions near Sana'a Airport, as well as an airbase in Dulaimi. Air strikes were also carried out on a residential complex in the northern part of Sana'a, where dozens of civilians, including children, were killed. All was done quickly and smoothly, disregarding international law.

Saudi Ambassador to the United States Adel al-Jubeir said that the goal of the operation was to "protect the legitimate government of the country," led by President Abd Rabbo Mansour Hadi. This brings up memories of toppled Ukrainian President Viktor Yanukovych, who was also a legitimate president, and perhaps also asked Russia for help. Russia was warned not to do that.

"The military operation in Yemen bypasses existing norms of international law. There is no UN Security Council resolution for the operation, - Elena Suponina, Advisor to the Director of the Russian Institute of Strategic Studies, Arabist and expert on Asia and the Middle East, said in an interview with Pravda.Ru. - Moreover, Saudi Arabia did not even wait for a mandate from the Arab League for the military operation.

"This is a very dangerous precedent not only for the Middle East, but also for the entire system of international security. This is not the first time, when interested countries bypass existing norms. This is just another example of double standards," the experts told Pravda.Ru.

For the time being, the whereabouts of Yemeni President Hadi (he is a Sunni) remain unclear. However, his behavior raises huge questions. "It was Hadi, with whom the United States was negotiating the normalization of the situation in Yemen, helping him in anti-terrorist operations against al-Qaeda on the Arabian Peninsula. Yet, what the Huthis have done in five years of their rule in the capital (from September to February) to weaken Al-Qaeda turned out to be much more significant than Yemen's entire anti-terrorist campaign with the participation of the United States, which began in 2002," Sergei Serebryakov, senior officer at the Center for Arab Studiesof the Institute of Oriental Studies said in an interview with Pravda.Ru. After terrorist attacks and attacks on mosques, many terrorist groups have been destroyed.

"The US has long structured policies in the south of the Arabian Peninsula, playing on elements of conflict between the Kingdom of Saudi Arabia and Yemen - either making the KSA the central element of its strategy or strengthening the independent role of the regime before the Yemeni revolution," the expert noted.

According to the expert, no one in the West says that Hadi escaped to Aden and refused to negotiate with the Huthis. "Hadi's sudden mysterious move to Aden in February created a dual power situation. The president immediately started conducting military preparations, arming Aden tribes to protect them from the Huthis. While in Sana'a, there was a discussion going about the transition to the collective body of presidential power with his participation. It could be possible that he would chair the presidential council," said the expert. Hadi chose to request military assistance from the United States and Saudi Arabia. Most likely, though, he was forced to request assistance from them.

The Huthis said that coalition airstrikes in Yemen would lead to a large-scale war in the region. "This aggression and we will respond with a counter-attack," the leader of Ansarullah, Ali al-Imad said. "Saudi Arabia has taken a step towards the unification of the people of Yemen against Saudi Arabia and it will a big price for that," he added.

"The declared war will not be limited to the Huthis only. It will affect a large segment of the Yemeni society. Former President Ali Abdullah Saleh found himself in a tactical alliance with Ansarullah. Saleh retained his post as chairman of the ruling party and still enjoys loyalty of the army and security services. The Yemenis understand that they are now losing the foundation of their national sovereignty," said Sergei Serebryakov. According to the expert, Yemen may become another Afghanistan.

"Any sort of foreign military operations in Yemen is very dangerous, - said Elena Suponina. - Let's hope that Saudi Arabia will refrain from the ground invasion of Yemen, knowing what the Yemenis are freedom-loving people. One may assume that the invasion will trigger a guerrilla warfare and resistance not only on the part of both the Huthis and other political movements, including those loyal to President Hadi. The people of Yemen have never tolerated military interventions from other countries."

According to the expert, "Russia has very good relations both with the Yemeni president, his supporters and the Huthis movement, including toppled President Ali Abdullah Saleh."

"Russia is a player that cooperates with all sides in Yemen. That is probably what the Americans and their allies should learn from Russia. Because the only thing that can save Yemen is the return of all conflicting parties to the negotiating table. Russia's participation in the process could be very useful," said Elena Suponina.