Moscow had patience to tolerate blackmail in Syria and the massacre of Ukraine until the United States and Saudi Arabia crossed the red line by lowering oil prices. Russia had to prepare a response. A gambit in Yemen was played together with Teheran for the purpose of causing damage to the Wahhabi state. After all, the Saudis are used to sponsoring wars, but they do not like to die in them. 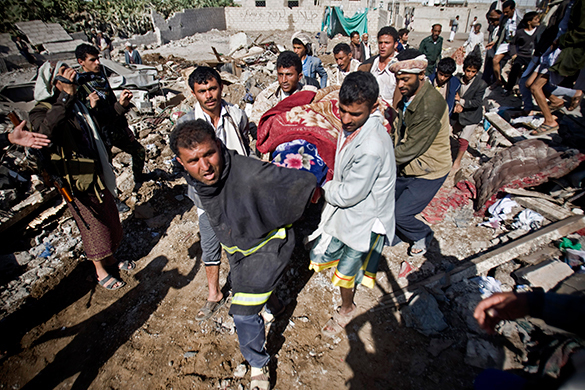 The US claims that in Yemen, American troops are fighting against al-Qaeda and ISIS. The goal of the operation, according to White House spokesman Josh Earnest, is to support the central government, create the potential of local fighters and use own technological and military resources to put pressure on extremists.

But, firstly, the "central government" of Yemen in the person of President Hadi fled to Aden and has no control over the situation. Secondly, "local fighters" of Yemen are the rebellious Huthis (Zaidi), Al-Qaeda gunmen and regional separatists. Thirdly, the "own resources" of the United States - 125 CIA and Pentagon advisers were evacuated from Yemen after the war broke out in the country. Therefore, in order to maintain control over the important strategic area, ​the United States had no other choice but to push Saudi Arabia for action.

On March 25, the coalition of ten countries, under the leadership of Saudi Arabia, started bombing Yemen for the control over the Bab-el-Mandeb Strait.

The situation in Yemen "is a major defeat" for the United States and Saudi Arabia, Bruce Riedel, a former CIA analyst for the Middle East, told AFP. According to him, the USA has no choice but to support the forces that have been left in the country after President Hadi, and try to obtain all the necessary help from Saudi Arabia and Oman. At the same time, Riedel added, if there are forces that fight against Al-Qaeda in the region, they are the Huthis. The expert could not expand on this contradiction.

It just so happens that the United States has demonstrated its absolute incapability in foreign policy. Many analysts say that the Americans deliberately create controlled chaos in the world. Is it really the case? The chaos has been going out of control. Below is a remark voiced by Saud Al-Faisal, the Foreign Affairs Minister of Saudi Arabia, during a meeting of the Arab League in Egypt on Sunday.

The remark was a response to President Putin's letter to the leaders of Arab States. In the letter, the Russian president calls to resolve the conflict "by peaceful means, without external interference." "Putin talks about the problems in the Middle East as if Russia has no influence on these issues," the Saudi minister said irritatingly. According to him, the Russian authorities talk about the tragedies in Syria, while they act as a part of those tragedies by arming the Syrian regime to fight against its own people."

From the point of view of the Saudis, in the Middle East, they have to deal with the coalition of Russia, Iran and Syria. What if Yemen is part of a plan to repel the attack of Saudi Arabia and the United States in the game to lower the price of oil? It turned out that the Huthis can block the Bab-el-Mandeb at any moment. In this case, tankers from Saudi Arabia will not be able to go through the Suez Canal to Europe and America. When Iran promised to do it two years ago, an uproar occurred, and now it is logical to assume that Iran decided to do it more carefully - through the hands of the Huthis.

As a result, the price of oil will go up dramatically. Of course, this is sacrifice, because Yemen is facing a full-scale intervention. Yet, Yemen is fighting for justice - to bring Zaidi imams back to power (an ancient dynasty in northern Yemen).

"For centuries, all Yemeni imams (kings) were Zaidi imams. They were the people, who were entitled to power, which is very important in Islamic countries. They were very proud of practicing their own form of Islam. The fact that they are now in power is like restoration of historical justice," Sergei Plekhanov, the author of many books about the Arab world, said in an interview with the Moskovsky Komsomolets newspaper.

Yemen is the only country in the world, where arms trade is legal. Every man has a Kalashnikov, and patriotism remains on a very high level. The Saudis have a weak army, but they can have help from Egypt and Pakistan that depend on the funding from Saudi Arabia. The prime ministers of both Egypt and Pakistan have declared their readiness to join the ground operation. However, Egypt has bad memories of Yemen. Fifty years ago, Egypt lost 26,000 soldiers in the ill-fated military intervention in Yemen. In addition, Pakistan may receive another highly unstable border.

"Arabs do not like Saudis. They are afraid of Saudi Arabia, because they depend on it. There's a lot of money in Saudi Arabia, but no one likes those who own that money. The Sunni coalition may fall apart quickly. A part of the army has already sided with the Huthis," says Sergei Plekhanov.

Saudi Arabia will have to face higher justice. This is a Wahhabi state that funds all wars in the Middle East, trains jihadists, organizes speculative futures trading in oil and its peg to the US dollar.

Russia and Yemen have something to talk about. The two countries can recall the cooperation in the middle of the last century, when the Soviet Union accounted for more than 50 percent of foreign loans received by South Yemen.