In recent months more than a few words were written about Greece, the huge debt that strangles her and about the ways to resolve the situation. Tsipras and his economy minister, Varoufakis, have been described from time to time as champions of the poor, champions of a new Left world, a couple of clueless, two inepts, improvisers, the Gianni & Costello of politics. Many people feel lions behind their computer keyboards because the false anonymity of the forum can let off steam in a cheering stadium that promises solutions infallible on the web as inconsistent in reality. 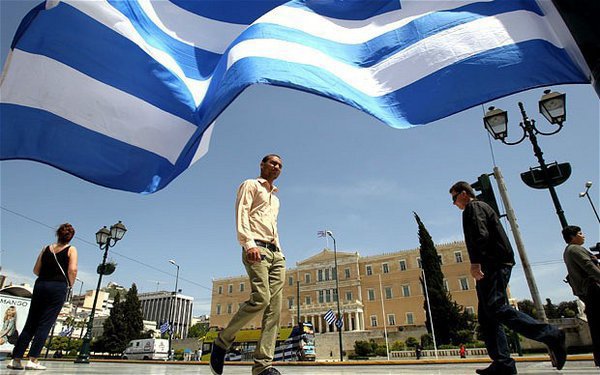 Personally I do not know what's inside the head of Tsipras and his ministers, let alone I don't have any crystal ball with which to probe the future.

But I know other things. For example, I know that for many years Israel tortures Palestinian people using the Gaza Strip as a polygon for air strikes and artillery. And when are not the bombs raining down death, it is the infantry with rifle and knife. There is a clear imbalance of forces on the ground and yet it is Israel who whines to the whole world his being attacked and the world that (for now) counts for something, believes to Israel.

I know that for nearly five years Syria fights against hordes of assassins financed by Saudi Arabia, Qatar, Turkey, Israel, the United States: these killers profess a religion that looks like to Islam only by name but they are not true Muslims. They are automata designed to genocide by some perverse psychology laboratory at Langley but they are not and will never be true followers of the Prophet. Syria is a secular and socialist country who has always respected all religions on its territory and, in particular, the role of women: now is likely to experience the same misfortune happened to the hapless Libya. The apparent injustice of the situation does not take away the sleep of the world that (for now) counts for something. Rather.

Ukraine: From coup to chocolatier

I know that in Ukraine there was a government elected by the people, a government perhaps flawed, for God's sake!, but recognized as legitimate by the international community. The world that (for now) counts for something, managed to clear it with a coup after organizing riots. Now in Kiev it took office a chocolatier whose political results do not seem particularly significant, swastikas and Nazi phalanges are happily back, the economy is in disarray and the Ukrainian army went from one defeat to another in the Donbas. The world that (for now) counts for something believes that this could be a good time to hit Russia and make her pay for her victory in World War II.

I could go on but I will stop here. What I mean is that it is difficult to govern a Country, especially in these modern times in which the principle of non-interference is considered a joke.

For months the government Tsipras has negotiated with the European Union and the International Monetary Fund. Greece has never missed a payment between those due but clearly she cannot continue to negotiate or pay indefinitely while her economy is falling apart, and her people are starving. Greece is criticized for not wanting to pay his debts but what about the war debt that Germany has against Greece and that is not going to honor? In Italy only the journalist Giulietto Chiesa has analyzed the topic (here): whether Germany would honor its war debt, not only Greece could solve its problems but, in the case, she could help Italy and Portugal to solve their too.

Once again the world that (for now) counts for something has preferred to turn around the other way.

For what it's worth my opinion, the choice of the referendum was the only one possible given the domestic situation and international. I could be wrong but it seems a choice heroic and pragmatic at the same time. There will not be improvements in the case of victory of YES: Greece will continue to be bled and turned into a slave nation, with its own native oligarchy that only responds to foreign counterparts and will look to his own people, those less fortunate, such as exploitable lower beings. I hope that in this case the government Tsipras immediately resign and does not participate in the massacre that will be.

If the NO wins, the situation would become suddenly much more dangerous for Athens than it is already now. In reality this is not simply a referendum on such economic measures taken or whether or not to stay in the Euro. Rather, if stay on the EU or NATO. And the European Union does not provide mechanisms certain, clear and above all peaceful to separate from itself. Just as for NATO. So the victory of NO would introduce forcibly dark scenarios for Athens.

I consider unlikely a color revolution Maidan-style, but I fear it is more practical the possibility that the western oligarchies at least attempt to overthrow the Greek government by force: there is already a precedent and who care if this time will be again colonels or instead some generals to take action? But, as often happen, there's an odd man out in this new Great Game: what were said Tsipras and Putin each other in Moscow? What will do the Kremlin after July 5? To be precise: where will dock the warships of the modern neo-capitalist Russia? These questions are interesting and there are not so many days to find them out.

I conclude with a joke that runs on Facebook and that seems appropriate given the situation: Democracy is a Greek word, it is natural that the rest of the world does not understand it.