"Obama says he's a Christian. Poroshenko says he's a Christian. They do Satan's work here." The defender of the weak and downtrodden, Mr. Russell Bentley, continues to amaze me. American leaders and their talking heads on TV willingly ignore genocide in SE Ukraine. The average American doesn't care if kids are blown to pieces in Donbass. Yet this American, a Texan, whom the great Nazi killer Audie Murphy would be proud of, not only rights the wrong in Ukraine, but rebuilds the faith of the people. Make no mistake. This Civil War in Ukraine is a war on Christians. 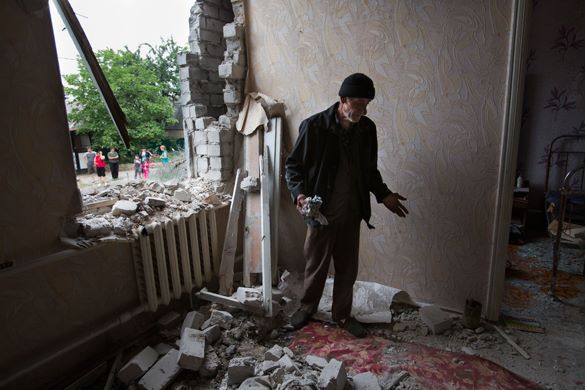 Who destroys churches? Satan and his followers. Let a witness who fought there tell you. "We're here today to talk to the church going people of the United States about the churches here in Donbass. We're going to help rebuild churches here and the first one we're going to help is the one that's at Troishka which was my first position back in January 2015. This was the first place that I fought back in January. This was a very, very hot position."

"We just want to show you the damage that the Ukrainian fascists have done to the churches here with the help of the United States government. If you're a church going person you ought to think about what it would be like if somebody did this to your church."

"This is the spot when I first came to the airport New Year's eve 2014. My first day of combat was New Year's day 2015. (see combat video) This is the spot where I got out of the van (standing in front of the church). My first day at the front. It was dawn, dark, very cold and the first thing I saw was this church right here. And it gave me a real good indication of who I was fighting."

"When I was here in January the Ukrainian fascists still held the new (airport) terminal and I was here when we took it back. We gave covering fire from the monastery." Mr. Bentley enters the war torn church. "This is the house of God. This is a church. People in Donbass take their religion very seriously. They're good Christians. This is what the Nazis did. The Donbass army defended this church with their courage and with their blood." See his HAN Battalion.

"I lost 3 friends here. 3 comrades on January 17 killed in one day by a massive Ukrop fascist attack. But we repelled them. We won that battle." One of his friends had his leg almost blown off by a tank round but he continued to fight for five hours before he died. Bentley looks all around and continues, "But this is what the Nazis do and we're here to stop them."

"This was a beautiful church and the people have already come here. I mean when I was here last time, it was rubble and bricks this deep (almost waist high) in here from where they blew the roof off. The people have come back, they're already starting to work and clean it up and this is hard work man. There is tons of bricks and rubble here that need to be cleaned up before they can even start rebuilding. But they're not here now because the Ukrops (Ukrainian army from Kiev) again have broken the ceasefire and they're shelling this area today. They're snipers in this area right now."- Russell Bentley

The US will not make peace. After all, making peace is losing money, either in Europe or the Middle East. They say "Yes" most emphatically because of their greed. Their souls are darkened by Sin and cannot comprehend the light. All I hear is Obama claiming it's Russian propaganda and escalating the war. Bush used to call it the New World Order. It's just another chapter in Obama's book of "Hope and Change". "For they are the spirits of devils working signs, and they go forth unto the kings of the whole earth, to gather them to battle against the great day of the Almighty God"- Revelation 16:14.

Last May 2014, a priest was killed. Fr. Paul Zhuchenko was shot in the Donetsk region. In early August, Archpriest Vladimir Kreslyansky was killed during the bombing of Lugansk. August 9th in Lugansk another Orthodox priest was killed during the bombing. "The witnesses say that he died praying. While he was praying the dropping bombs blew up in the air before they reached the ground, and no other people got wounded." His prayers miraculously saved his people. More priests are missing and assumed dead.

Churches are bombed and civilians are not spared. Last July 2014 a church was bombed then later filmed by Anna News in this video. Recently in Gorlovka, the Annunciation Church was set ablaze by bombs that hit it intentionally. Kiev wants genocide in SE Ukraine. They obey their master well. It's the CIA way of doing things. The Russian Church says it, "is renewing its call for the immunity of holy places and the clergy not to be sacrificed to hatred". Sadly, I do not hear the western churches protest Kiev. Certainly their governments do not implore Kiev to stop the bombings.

"Obama says he's a Christian. Poroshenko says he's a Christian. They do Satan's work here. These guys are Nazis. They do the devils work. If you're a Christian and your church wants to help rebuild this church, wants to help the people of Donbass, the innocent civilians. We have a humanitarian organization. You can contact me Russell Bentley on Facebook. You can contact Han Humanitarian on Facebook. You can start your own organization. The point is, let's help these people. Let's stop this war and let's rebuild this country and make it a beautiful place this once was and that it deserves to be again." As he looks off in the distance one can hear the sounds of war in the background.

Is the truth called propaganda in America? Now we see what he meant by "Hope and Change". Christ said as you can identify a tree by its fruit, so you can identify people by their actions - Matthew 7:20. The fruit of Obama, his sponsors, government, supporters and his media is pure evil.