Why Donald Trump is our maverick candidate 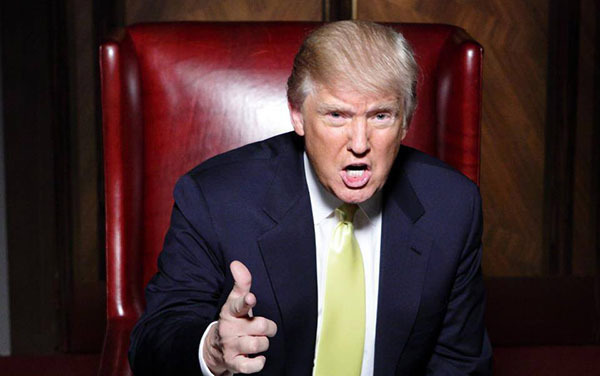 Violence in Charleston reflects American madness. Recession is back again, despite cheating figures. Fires in Alaska reflect the worst drought in a century and the American ecological disaster (read Dean Kunstler's books on the subject). Satanism is everywhere in American culture, from Lady Gaga (second most popular figure in the world) to the Bordello or Gothika shoes. Then a rabid Pentagon and the hostile elite want a nuclear war in "Old Europe". All's well that starts well...

Two years ago, I was writing here that America needed her populist candidate in order to challenge Mother Monster Clinton or Bush the 3rd. Such is the American nightmare that the American people cannot vote for another candidate than a pawn representing an obnoxious dynasty. America cannot get rid of Bush or Clinton, it is becoming like an indecent tragic-comedy. Both candidates are responsible for main recent American problems - uncontrolled immigration, violence, deficits, de-industrialization and a grotesque imperialism.

Trump represents of course somehow a caricature of the American dream. He's vulgar, ultra-rich, tempestuous, but at least his exuberance looks rational; a millionaire in the great traditional sense of the screwball comedies.

Trump has got sense, unlike McCain

Trump's got sense and sensibility too, unlike another monster like McCain. He has not sold his soul to a Sheldon Adelson for instance, and he really likes his country - or what is left of it. Let us recap the advantages of his candidacy:

- First, Trump is rich. He doesn't need to steal or to sell his will to an invisible wire-puller. He knows that the American dream is truly dead. The murder began in Dallas but this dream was definitively assassinated during the Bush-Clinton era. He says: "I don't need anyone else's money, I'm really rich," he said. "I have total net worth of $8.73bn. I'm not doing that to brag. I'm doing that to show that's the kind of thinking or country needs."

- Trump sees the N°1 problem: there are no statesmen in America, just pawns and employees of the big corporations and the military-industrial complex. And so he states: "Our enemies are getting stronger and stronger by the day, and the US as a country is getting weaker and weaker. How stupid are our leaders, how stupid are our politicians to let this happen? Our president doesn't have a clue..."Politicians are all talk and no action. They will not bring us to the promised land."

- Trump is preoccupied by his Mexican border. One may accuse him of xenophobia, but it is clearly better than to be preoccupied by Russian or Ukrainian border! 18 million immigrants during Obama era! Let us listen to him. Trump's wrath is directed at Mexico, which he accused of "bringing their worst people" to America, including criminals and "rapists". He adds shrewdly: "They're sending us not the right people," he said, adding: "The US has become a dumping ground for everyone else's problems. They're sending people that have lots of problems and they're bringing their problems," he said. "They're bringing drugs, they're bringing crime, they're rapists, and some assume they are good people but I speak to border guards and they tell us what we are getting." He promised that as President Trump, one of his first actions would be to build a "great, great wall on our southern border, and I will make Mexico pay for that wall".

Economy: Donald Trump acknowledges the unofficial figures provided by John Williams, Michael Snyder or Dr Roberts: "Our real unemployment is 18-20%, don't believe their 5.6%. China has our jobs, Mexico has our jobs. I'll bring back our jobs and bring back our money."

About China, I will remind my reader these lines written by Michael Snyder:

"In 2010, China produced more than twice as many automobiles as the United States did. In 2010, China produced 627 million metric tons of steel.  The United States only produced 80 million metric tons of steel." Trump wants to recuperate the jobs left to China or Mexico with the suicidal treaties signed by the American presidents, obeying the mad neoliberal agenda.

American education system is a failure

Trump confirms too that the so boasted American education system is a failure and a cheat:

"People are tired of spending more money on education per capita than any other country».

-Stock exchange and Wall Street: Trump speaks like a man to whom rational economic choices are second nature. And so he understands that the "stock market is bloated"; that the Stock Exchange is a laughing stock, and that soaring stock prices are a consequence of centrally planned, monetary stimulus.

And the final point: Trump is good for peace. For Trump surprised Bill O'Reilly with the revelation that he'd "have a great relationship with Vladimir Putin."  This is why Trump would be a great president indeed; he admires Vladimir Putin who is the most popular man in the world now.

Trump is a populist like many European politicians. In France and in Europe too we have doormats and hostile elites challenged by populist leaders, thus prophesied forty years ago by Professor Brzezinski - in his book Between Two Ages:

"The creation of the global information grid, facilitating almost continuous intellectual interaction and the pooling of knowledge, will further enhance the present trend toward international professional elites and toward the emergence of a common scientific language (in effect, the functional equivalent of Latin). This, however, could create a dangerous gap between them and the politically activated masses, whose "nativism"- exploited by more nationalist political leaders-could work against the "cosmopolitan" elites.

Trump is given little chances against the "cosmopolitan elites". And the maverick candidates help to elect the worst of candidates: see Ross Perot, a billionaire too, who got elected Clinton in 1992, or Ralph Nader who helped Bush 2nd in 2000. But this time we have no worse candidate: Mother Monster and Jeb Brother are both an abomination.