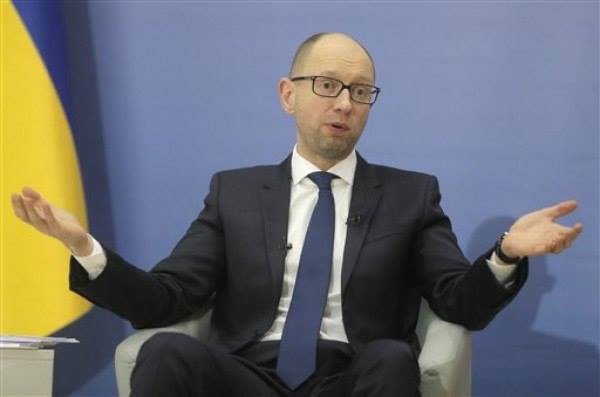 On Thursday, January 8, Arseny Yatsenyuk, when visiting Germany, gave an interview to German TV channel ARD, in which he said: "Germany and the German Chancellor personally have done a lot to restore peace in Ukraine. To guarantee stability not only in Ukraine, but also in the whole of Europe." The current "Russian aggression in Ukraine is an attack on the world order and the order in Europe." "We still remember well the Soviet invasion of Ukraine and Germany. This should be avoided," Ukrainian Prime Minister Arseny Yatsenyuk said.

On Friday, January 9, Yatsenyuk's spokeswoman Olga Lappo explained the words from the prime minister. According to her, the head of the Ukrainian government had in mind the post-war division of Germany. "Arseny Yatsenyuk meant the division of Germany by the Soviet Union after World War II. A wall was built to divide Berlin to exclude the movement of the Germans from the eastern to the western part of the city," said Lappo.

Several Russian politicians have reacted to Yatsenyuk's words. For example, the head of the State Duma Committee for Foreign Affairs, Alexei Pushkov, wrote on his Twitter that "Yatsenyuk has finally gone mad." The head of the same committee of the upper house of the Russian parliament, Konstantin Kosachev, said that the remarks from the Prime Minister of Ukraine were a shameful excuse to Hitlerism and an insult to the memory of heroes.

In Germany, the online version of Spiegel magazine satirically wrote: "Indeed, since 1942, Soviet troops had been moving relentlessly to the West and were not afraid to pursue the army of the democratically elected chancellor Adolf Hitler even on the Ukrainian territory. (...) Finally, the Soviets transgressed the eastern border of Germany and invaded its territory, as we all remember, together with Mr. Yatsenyuk."