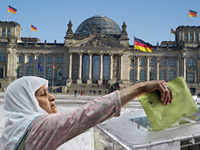 Germany celebrated the Day of the German Unity. A local statistics agency prepared a peculiar "gift" for this date. It published the data showing that almost one fifth of the country's population is immigrants.

According to the statistics, out of 81.7 million residents, immigrants make up 15.7 million, or 19.3 percent. Slightly more than half of them (8.6 million) hold German passports. The highest percentage of residents who moved to Germany from other countries are from Turkey (14.1 percent), Poland (10.5 percent) and Russia (9.2 percent). The Volga Germans are predominant among them, but there are also Jews, Russians and representatives of the peoples of the Caucasus.

However, the number of 19.3 percent can be viewed as somewhat exaggerated. The German statistics considers non-indigenous populations not only those who came to the country after 1950, but also their descendants. As a result nearly one in three immigrants is not an immigrant, but a native of Germany (6.3 percent of those counted.) However, the number of 12.9 percent of natives of other states is very impressive. Apparently, this number will be growing further. The average age of immigrants is 11 years younger than that of the indigenous Germans, and in each of the next generations their share will be even higher than the current average. Yet, immigrant issues are not limited to the numbers only. Apparently they adversely affect socio-economic indicators.

Immigrants from Muslim countries cause the biggest concern for the Germans. Recently the detention near Bonn of four young men suspected of connections to Islamist organizations was reported. As a result these detainees were released, but in other cases evidence of a link with the terrorists was found rather quickly. It was established that many participants in the September 11 attacks of 2001 were parishioners of a mosque in Hamburg, whose activities were curtailed.

Currently, there are 4.3 million Muslims in Germany (over five percent of the population). Approximately two-thirds of them are the Turks, while others are mainly Arabs, Kurds, Albanians and Bosnian Muslims. Approximately 45 percent of them have German passports, while the desire to be fully integrated into German society was expressed only by 25 percent. Did Chancellor Angela Merkel, acknowledging that the integration of Muslims into German society failed, mean exactly that? The number of mosques has increases exponentially. In 1970, Germany had only three mosques, and today there are over 2,500 of them (an increase is impressive, even taking into account the fact that today this statistic includes the territory of the former GDR). Three years ago the authorities in Cologne have given permission for the construction of mosques and minarets which originally were supposed to be above the domes of the famous local cathedral. Only after numerous protests the height of minarets was reduced.

As in neighboring France and Belgium, there have been attempts in Germany to limit the use of hijab in schools. Back in 2003, the Constitutional Court of Germany allowed individual lands to introduce respective bans. As a result, Bavaria, Baden-Wuerttemberg and North Rhine-Westphalia banned teachers from wearing Muslim headscarves. Berlin decided to ban all religious symbols. Interestingly, many Turks support these restrictions. Social-Democrat of Turkish origin Leyla Akgun called the headscarf a prison threatening human rights.

There are numerous examples of successful integration of Muslims into German society: film director Fatih Akin, singer Tarkan, the German national football team players Mesut Ozil and Sami Hedira. Some ethnic Turks were able to launch political careers - for example, co-chairman of the Green Party Cem Özdemir, or the Minister of Education of Saxony Aygul Ozkan. Up to a third of the German Muslims do not attend mosques, and in this sense, Germany is more successful in integrating immigrants than France or England. Yet, the problem still remains.

A study conducted 18 months ago showed that the number of Germans worried about the growing number of the followers of Islam is very large. For example, 36 percent expressed serious concern about "creeping Islamization" of Germany, and another 39 percent - a slight concern. If we consider that the birth rate among Muslims is much higher than that among the Germans, the above mentioned numbers may become higher.

However, so far Muslims do not predominate among immigrants in Germany, accounting for just over 20 percent. Nearly 32 percent of foreign-born are immigrants from the current EU countries. Poles lead the competition with 1.7 million of the country's nationals residing in Germany. This number is probably somewhat understated. Many go to work in Germany from the neighboring regions of Poland (for example, from the city of Szczecin) and do not need to obtain German residency as they return home every day. In addition, Germany employs half a million Italians, 370,000 Greeks, and over 100 thousand Portuguese. A significant portion of non-Muslim immigrants are from the former Soviet countries (over two million people). They are dominated by the Volga Germans from Russia and Kazakhstan. In addition, as a justification for the Holocaust, the Germans welcomed several hundred thousand of Jews to the country. This is not counting Russian wives, half-breeds, economic immigrants, and immigrants from the Northern Caucasus. As a result, approximately three percent of the population of Germany speaks Russian.

In addition, a large number of Serbs (over half a million), Croats (250 thousand) and citizens of other republics of former Yugoslavia work in Germany. Many of them were born in Germany and have two passports - a German one and one of their own ethnic homelands. Finally, there are large German cities similar to Chinatowns. Their residents include people from sub-Saharan Africa (few hundred thousand).

Certain issues are shared by many Muslim immigrants and immigrants from Christian and other countries. The main issue is poor knowledge of the German language and consequent difficulties in getting decent jobs. Many children of "non-native" Germans join the ranks of organized crime. This is a source of frustration for the indigenous Germans promoting the growth of the nationalist sentiment, as well as undermining the principle of seemingly stable German government and society. 21 years ago Germany was reunited. Many thought that the dividing lines in the country were abolished once and for all. However, today a number of new boundaries (national, religious, mental, etc.) representing a challenge to Germany as a German national state have been identified in the country. The peace not only in their own country but also across Europe depends on the success of the German authorities in coping with it. In the meantime, they are not coping too well, and the country is losing its German face. This was acknowledged by Chancellor Merkel and former head of the Bundesbank Thilo Sarrazin in his scandalous book Deutschland Schafft Sich Ab ("Germany is digging its own grave.")