Many see German policy in the European Union as a forceful advancement of Germany's interests at the expense of other countries - EU members. There are even suspicions that the crisis in the EU is a project of Germany designed to secure the economic recovery (the European Commission even started an investigation). Berlin is not going to stop in its plans. 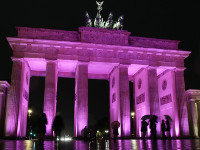 In late 2013 the European Commission has launched an investigation of Germany's policy because of surplus in the country's payments balance. This raises suspicions, because Germany's economy is booming while other European Union countries are dealing with growing unemployment and industrial decline.

On the other hand, on January 8, 2014 the European Commission Vice-President Viviane Reding said that there was a need for a "true political union" like a United States of Europe with a committee that would fulfill the functions of government and a bicameral parliament. Reding explained that this was about transformation of the EU into a superpower. In addition, Germany has recently put forward a proposal to establish a banking union and joined armed forces. Here one can see Germany's intention to strengthen its leadership role in Europe and emerge as a global player.

German politics, its socio-economic model, is regarded by many in the EU as imposition of their views in a fairly polarized society. For example, if Greece defends the strengthening of internal fiscal consolidation and promotion of the fundamental branches of the national economy, the Lithuania sees the development of Europe in the active expansion of the EU to the former Soviet Union. In the middle of this range of opinions are Poland, Slovakia, Czech Republic and Hungary that have a stable economy and national- oriented states.

Bulgaria and Romania that only want to be heard are standing aside. This orientation depends on the position of national elites. We are either talking about the governance of Euro-Atlantic connections (US-European lobby) or strong lobbying of national business activity. The first group includes Germany, France, Austria, and the Netherlands, the second - Poland, Czech Republic, Slovakia, Hungary, Croatia, Spain, Italy, and Greece. However, increasingly more countries in the second group are moving to the first group due to the extensive privatization of property purchased by the Atlanticist lobby.

The failure of a project called "Eastern Partnership" is caused by the simple fact that the Poles did not work with the Germans, have relied on their own strength and lost. Soon we can expect a creeping expansion of transnational capital from the U.S. and Germany to Ukraine, which will be completely unprofitable for the national-oriented economy because it promises the diversion of funds from the EU budget intended for payments of various compensations.

Political differences are accumulating in the EU because the adoption and implementation of decisions is dominated by the Euro-Atlantic perspective lobby conducting its policy in Europe and Germany. Germany is consistently implementing the plan mentioned by Finance Minister Wolfgang Schaeuble in an interview with The New York Times in November of 2011. He then spoke of the need to move towards a centralized Europe, as the euro zone was not enough. He spoke of the need of a political union with the election of the president directly by the people. He said that by the end of 2012 or mid-2013 there would be everything necessary to strengthen and deepen the political structure. He added that political union could be achieved only in times of a crisis.

The European Commission Vice-President Viviane Reding included this line on the agenda on January 8, 2014. She stated that there was a need for a "true political union," United States of Europe with the committee fulfilling the function of government, and a bicameral parliament. Reding explained that this was about the transformation of the EU into a superpower where the role of national governments and parliaments will be minimized similar to the role of local councils in Britain.

The economic crisis in the EU was organized by Germany (remember Schaeuble's words) to save the dollar and the U.S. economy and provide for the federalization of Europe. This is how it was done in Greece. In early 2010, German banks Deutsche Bank, Bayeren LB and LBBW refused to provide loans to the Greek government, then major banks engaged in public funding and others refused to buy the country's securities. Postbank stopped investing in this country.

Greece was forced to privatize its state-owned enterprises with strategic value of 50 billion euros, in particular, the gambling monopoly, OPAP company, as well as a monopoly in oil refining - Hellenic Petroleum. Greece is now paying the money made on privatization to the IMF in the form of interest and American hedge funds (in particular, Third Point) that have bought Greek debt, of course, not without an insider deal. The sale of bonds allowed Third Point to earn $500 million, The Financial Times reported.

Germany also made good money. According to former Greece Finance Minister Evangelos Venizelos, German banks have made 400 million euros on interest on loans to Greek banks. Furthermore, Germany is forcing Greece to buy its weapons. A similar method of financial enslavement was used by Germany with other countries. As a result, immediately after the new year, the agency Standard & Poor's downgraded the credit rating of the European Union from the highest "AAA" to one level lower, " AA + ." Germany's rating remained at "AAA."

It turned out that there is a weak Europe and a strong Germany that on the initiative of Chancellor Angela Merkel is not very publicly forming Transatlantic Trade and Economic Union (TTEU) with the United States. The goal is to provide European markets for the Euro-Atlantic lobby (which includes markets and countries associated with the EU) for distribution of American products. Creation of TTEU will be marked by the growing Americanization of Europe, that is, the destruction of social national state and reduction of wages. The partners really need Ukraine because of its large market, and this is no accident that all major Ukrainian opposition representatives have the support of the CDU - CSU, including direct financial support.

There is resistance in the EU, but it is negligible and not at the elite level, mostly at the level of social protests. It is these protests on the background of lowered social security, unemployment, growth of public debt, financial speculation on privatization (which Bosnia is now protesting), and corruption that may lead the European Union to a tragic end. National elites understand this and through nationalist parties call for the reform of the EU. They call on making it less aggressive in the social aspect and tougher on migration.

They also call on returning the financial sovereignty to the countries, taking the control of national financial and economic systems away from Brussels (i.e., German and French banks).

National lobby is very strong in Hungary, where in 2013 the National Bank was nationalized and where the priority of the national state is defended. Prime Minister Viktor Orban of the Fidesz party has announced a new foreign policy, whose name can be translated as "Facing East." He recently took a trip to Turkey where he signed a strategic partnership agreement.

Whether the current sluggish confrontation between Germany and the countries defending their national sovereignty will move to an active phase depends on many factors and, above all, on whether there will be a new wave of the financial crisis. Recently Bank and Budget pacts of the EU have been adopted. Now all European countries except Britain must seek approval of their budgets in the commission of the European Union. This means that the countries will ask Germany (that has a printing press in its hands) how they should budget their revenue and expenses, where and how much to spend.

Those who do not do it will be sanctioned. But even if a critical mass matures and the EU falls apart, Germany has secured itself with accumulated banks reserves (due to a budget surplus) to the point that it will be the only country that will benefit from the collapse, according to estimates by the UK Center for Economics and Business Research (CEBR).

"In fact, Germany would benefit from returning to the deutsche mark," told Pravda.Ru Alexander Kamkin, deputy director of the Center for German Studies of the Institute of Europe. "But the Euro is not only an economic project but also a political one, and none of the German politicians, including Merkel, who consider themselves European politicians, will go for it. But if there comes the second and third wave of the crisis, the German politicians would have to choose whether to be political corpses inside, that is, try to save the euro at the expense of the German economy, or political corpses in the EU, if they choose to reduce the euro area or abandon it. "

But a political corpse is a temporary phenomenon if a new alliance with the United States is being established across the ocean.