President of Yemen Ali Abdullah Saleh urged his counterparts at the Arab League to unite to establish the Arab Union, a joint Arab state. The idea was voiced on March 27, at the 22nd summit of the Arab League. The members of the summit decided to study adequate opportunities in detail. 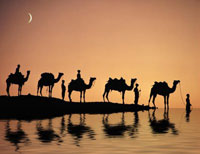 As a result, the Arab leaders decided to set up a five-sided committee to investigate opportunities. The committee has already prepared the protocol of intentions the goal of which seems to be clear: to create the joint Arab state.

Foreign ministers of Arab states will consider the document in the nearest future and then gather for a special summit to promote the idea further.

Amra Musa, the Secretary General of the Arab League offered to expand the framework of the possible unification with the help of other Muslim nations, particularly Iran and Turkey.

His initiative did not receive much support, though. Many in the Persian Gulf are concerned about Iran’s growing power. Iraq and Syria are in a dispute with Turkey regarding the Kurdish issue, not to mention other problems.

The Arab union may become an impressive force anyway. If created, it would mark the appearance of a new superpower on the map of the world. The Arab League is made of 21 states and the Palestine Liberation Organization. The territories of all these countries stretch from the Atlantic Ocean to the Persian Gulf.

It would be the world’s second largest (after Russia) and third most populated (after China and India) state. The joint Arab state would also take the undisputable lead on its energy sources.

The idea of such a union is not new. It was previously promoted during the previous century by Egyptian leader Gamal Abdel Nasser. His ideas of the joint Arab state were based on Arab socialism and the liquidation of the vestiges of colonial and feudal past. He only succeeded in the unification with Syria and Yemen, which subsequently collapsed after three years of existence in 1961.

Iraqi and Syrian Ba’athists and one of the most extraordinary Arab politicians Muammar Gaddafi of Libya tried to put the same idea into action. Gaddafi repeatedly stated that he was going to unite with Algeria, Sudan, Egypt, Tunisia and practically all of its Arab neighbors. He personally drove a bulldozer to destroy the Libyan border. Libya even came into armed conflicts with Egypt and Sudan in an attempt to realize the idea of Arab unity. Nothing came out as a result of all those actions.

“All that is just blah-blah-blah, - Arabist Georgia Mirsky told Pravda.Ru. - Arab leaders have been talking about unification for decades, but they have not done anything about it. They proudly say: “We are Arabs” but then they add “We are Egyptians,” “We are Iraqis,” and so on,” the scientist said.

“As experience shows, Arabic unity is a secondary category to specific state affiliation. There are no doubts about the fact that the political elite of Arab states does not want to sacrifice selfish interests for the sake of the common cause.

“Look at what happened with the union of Egypt and Syria in 1961. A Syrian, who then took an important position in the nation’s administration, told me once that everyone was happy about the unification with Egypt. When its officials arrived in Syria to govern the nation, everyone was deeply disappointed. The official, whom I mentioned earlier, was dismissed from his position and became a deputy for his new chief, an Egyptian. As a result, the union collapsed.

“The mindset of Arab people excludes parity and even democratic relations in administrations. Only authoritarianism is accepted,” the scientist concluded.