Five reasons for the West to lose Putin

Western media were "looking for" Russian President Vladimir Putin within ten days, inventing absolutely wild versions of his "disappearance". Such psychic attacks are often arranged against the leaders of other countries that do not show their loyalty to the West - for example, Xi Jinping of China or Cristina Kirchner of Argentina. 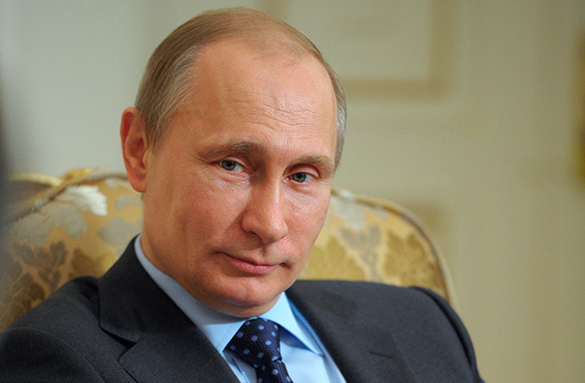 Was he recovering from pain in the back, or was he injured in a plotted car accident? Was he toppled in a palace coup? Was he killed in a plane crash? Is he concerned about the expected change in leadership? If you, dear reader, believe that these questions are about Putin, then you are wrong. The above-mentioned versions appeared in a material penned by AP correspondent in Beijing, Christopher Bodeen, who wrote his article on the basis of local blog posts. Xi Jinping had not made a public appearance for two weeks in October 2012, when, being in the rank of a successor of power, he canceled meetings with some of top officials, including US Secretary of State Hillary Clinton.

This is what Western media wrote about the "disappearance" of Cristina Fernandez de Kirchner, President of Argentina, who "dared" not to appear in public for 40 days in January 2014. They wrote that Cristina Kirchner died at age 60. She was on her deathbed after a surgery for malignant tumor of the head. This is what American tabloids said making references to local bloggers. Nothing and no one could convince gossipers that the president was undergoing rehabilitation after surgery for a head hematoma.

Other leaders - Dilma Rousseff, Fidel Castro, Hugo Chavez - would periodically "disappear" in the Western media as well. The question is who generates these rumors and what for?

The first reason. It is logical to assume that this is one of the methods of media warfare of the West against the leaders of the East and South to discredit them or stain their reputation. Typically, the versions of disappearance then evolve into allegations of mismanagement, suppression of the opposition, human rights violations, etc., depending on the situation. Conclusions are made that "the regime is about to "fall" under the pressure of angered people.

Such forecasts are based on descriptions of difficult economic situations in this or that country. Thus, with respect to Argentina, ABC said that the inflation rate in 2013 exceeded 28 percent, the dollar rose to 12 pesos on the black currency market and foreign exchange reserves declined from 53 to 30 billion dollars.

How do world leaders disappear?

Here is what Christopher Bodeen wrote in his article about the "disappearance" of Xi Jingping in 2012: "Xi's whereabouts during this sudden absence from the spotlight may never be known. One thing, however, is certain: China may now be a linchpin of the global economy and a force in international diplomacy, but the lives of its leaders remain an utter mystery to its 1.3 billion people, its politics an unfathomable black hole. So when the presumptive head of that opaque leadership disappears from public view, rumor mills naturally go into a frenzy."

And again - about economy: "While China avoided the worst of the global economic slowdown, export growth and domestic demand have both fallen sharply in recent months, prompting forecasters to slash their estimates for economic growth needed to create jobs and fill government coffers."

Here is a "forecast" for Russian President Vladimir Putin from Amanda Taub, a journalist with Vox: "Putin is almost certainly going to re-emerge in a few days looking none the worse for wear. But this isn't the first time rumors of this kind have caught on - and the fact that he can't cancel a couple of meetings without causing a frenzy of speculation hints at a deeper truth about Russia and the state of Putin's regime. These rumors stem from fear and uncertainty about what happens after Putin. No one knows who would assume power if he died, got sick, or otherwise left office. That instability is a real danger, even if the death rumors are probably false," Taub wrote.

The second reason to "lose" Putin stems from a psychological warfare that targets the goals as indicated in the first paragraph. When many people think in unison, idea materializes. "It is well-known that if you mentally direct your negative thoughts on something, it may eventually happen," psychiatrist Yuri Vyalba told Pravda.Ru.

"This is how, for example, the Big Ben tower clock stopped," said the psychologist. "This is also a kind of war on a mystical level - the war that uses people's fears. This is a form of mental diversion."

"In the US Army, there is a department called MISO (Military Information Support Operation). The department used to be called Psyops, Psychological Operations. The department conducts psychological subversive operations, - journalist, producer of film studio "Russian Hour" Alexander Korobko told Pravda.Ru. - MISO interacts with civil media and journalists. In view of the tense situation in the world today,  one may assume that MISO periodically generates such rumors. Of course, this is being done to affect citizens of Russia, because the approval rating of the Russian president is very high."

The third reason. Such actions have another important goal - to switch American voters' attention to an external threat to make people forget of their own dictators in the face of President Obama, Republicans and the dictator whom they support. It goes about the Saudis, ISIS, Peña Nieto criminal regime in Mexico that killed and burned 42 students who were protesting against education reform.

The fourth reason - the level of journalism in the West is very low. "The average London cab driver is a lot smarter than the average London journalist - this is a 100% fact. They even scanned their brains, - Alexander Korobko told Pravda.Ru. - Special forces launch a discourse, and uneducated, tabloid journalists, whose levels of education and spiritual development are very low, tirelessly trumpet about it."

The fifth reason. If this is an information war, it is possible that the "disappearance of Putin" was an operation conducted by Russian spin doctors that eventually boomeranged on the initiators. The Russians saw Putin on TV, so now they can sleep well. By the way,  where is President Obama, who has not been seen since March 8?