Venezuela without Chavez, Argentina next?

The rumors have been confirmed, and Argentine President Cristina Fernandez de Kirchner has taken a month-long leave of absence for health reasons. The detractors of which she has plenty are already drawing analogies with the fate of the deceased Venezuelan President Hugo Chavez and looking forward to the defeat of her party "Front for Victory" in the upcoming parliamentary elections in late October. 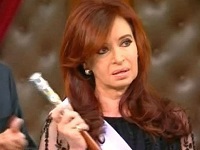 Cristina Fernandez was offered hospital admission on Saturday after an MIR has shown fluid in her brain. It is not clear whether this fluid is blood or something else, Argentine Agency Infobae reported citing official sources. According to the press- secretary of Argentina Alfredo Scoccimarro, the President was diagnosed with a subdural hematoma.

The official medical report says that this injury may be caused by a fall on August 12 as a result of fainting, and this is not the first such case. For the same reason she had to cancel her trip to Cuba in 2009. In April of 2011, on the eve of the presidential election, she cancelled her visit to Mexico, and in May she cancelled her trip to a regional summit in Paraguay. So far doctors report that they intend to pursue conservative treatment, but a surgical intervention with a craniotomy may be required. Two years ago Christina underwent surgery for thyroid tumor, although biopsy showed that the tumor was benign. The state of health of the president has caused speculation about her capacity in the global media, and gloating in anticipation that it will not help her party on the eve of the parliamentary elections on October 27, and that she would finally abandon her plans to run for the third term in 2015.

Cristina Fernandez does not use the revolutionary rhetoric of Hugo Chavez, but after the Commander she is the next candidate for removal from power for the West. Since the Spanish (Catalan) newspaper El Periodico wrote that Christina fell and was injured the next day after the "sensitive Kirchner-ism" suffered a defeat at the open parliamentary primaries. The newspaper quoted Nelson Castro, the author of the book "Patients in the government. Presidents' health and the consequences" (Enfermos del poder. La salud de los presidentes y sus consecuencias). The author warned about the "bad emotional state of Kirchner," the fall of her popularity among the middle class, and declared that "the disease was bad news for the government." The polls show that the balance of forces is not in her favor in the largest electoral district of Buenos Aires, the newspaper triumphed.

The main local opposition newspaper Clarín said that the president, despite serious health problems, would continue to perform her duties. In the strictest secrecy, the possibility of delegating authority remains one of the major uncertainties in the policy,-wrote Clarín and lamented that Christine makes decisions in a narrow circle of people - a legal secretary Carlos Zannini and his son, Maxim, who advised her not to show a signal of weakness in the face of the crucial parliamentary elections. The newspaper claimed that Kirchner and her party "Front for Victory," according to the opinion polls, was behind in terms of popularity.

Clarín launched a debate whether the Vice President Amado Boudou was to lead the country in accordance with Article 88 of the Constitution. They did not forget to kick the latter, blaming him of a corruption scandal and noting his "low popularity." Such persecution of the President and her team is easily explained. The Western media bought by the Rockefellers and the Rothschilds is implementing a policy of discrediting the unwanted presidents who do not want to get into debt.

Christina has paid the debts of Argentina and no longer borrows from the IMF and other funds. In order to support social programs, she maintained the peso exchange rate and nationalized the export industry. In September of 2008, she told the Americans that it is they who must have a plan "B" for the economy rather than the Argentines. The current state of affairs confirms her correctness, as the U.S. is moving inevitably towards a default on public debt, while Argentina has successfully overcome the crisis that has national health and pension insurance (which the Americans, judging by the recent events, will not see for a long time), and the country's GDP is projected to grow in 2014 by six percent.

Christina chose a political alliance with the block Chavez -Morales, Correa, Ortega, and at a much more intimate level than, say, Brazil did. The U.S. State Department does not like this development, as well as its opposition to the British Anglo-Saxon relics in the struggle for sovereignty over the Falkland Islands and a portion of Antarctica. Christina insists on cooperation with Iran in the investigation of bomb explosions at AMIA Jewish center in Buenos Aires in 1994, and does not understand why this issue was not raised at the meeting between Rouhani and Obama. She strongly supports the non-interference in the affairs of Syria and constantly criticizes the U.S. for "double standards."

Everything that is now being discussed in the pro-Western media about Cristina Fernandez' disease - lack of information, concentration of power in one hands, discussion of the delegation of authority - is reminiscent of the recent scandals in relation to the disease of Hugo Chavez. Although, the U.S. State Department is interested in Christina as it was interested in Chavez. According to Wikileaks, The Bureau of Intelligence and Research with the Department of State on the eve of the presidential elections in 2009 asked its embassy in Argentina to give them a profile of Cristina Fernandez, information about her mental health, political vision, and methods of work. They were interested in medicine she took, under what circumstances she handled stress better and how her emotions affected the joint (with Nestor) decision making.

The global banking elite have predicted Christine defeat twice, and both times unsuccessfully. Primary elections are not indicative, and we shall see what people have to say during the elections on October 27.