Hillary Clinton acts against her conscience and flatters Russia 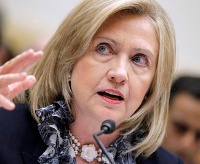 US Secretary of State Hillary Clinton believes that the role of the United States on the international arena is weakening. America, Clinton believes, has lost the information war with China and Russia. Therefore, the US administration must not cut the spending on propaganda. Mrs. Clinton did not specify possible financial amounts. It was obvious, though, that she was not satisfied with several tens of millions of dollars scheduled in the budget to celebrate victory over competitors on the Internet.

"America is in an "information war and we are losing the war," she stated appearing before a US Foreign Policy Priorities committee. Thirty million dollars is not enough for propaganda, she claimed. Clinton is certain that one should not concentrate too much on the Internet, because the majority of people still learn the news on television and radio.

According to Clinton, the USA's major competitors are Al Jazeera, CCTV (China) and Russia Today. Al Jazeera is the ultimate leader, Clinton said.

"Like it or hate it, it is really effective," Clinton said. "In fact, viewership of Al-Jazeera is going up in the United States because it is real news. You may not agree with it, but you feel like you're getting real news around the clock instead of a million commercials and, you know, arguments between talking heads and the kind of stuff that we do on our news that is not providing information to us, let alone foreigners."

Mrs. Clinton believes that it all happened after the USA cut the spending on mass media and propaganda after the Cold War.

"Our private media, particularly cultural programming often works at counter purposes to what we truly are as Americans," she said. "I remember having an Afghan general tell me that the only thing he thought about Americans is that all the men wrestled and the women walked around in bikinis because the only TV he ever saw was Baywatch and World Wide Wrestling."

Bill Clinton's government made the strategic choice at the end of last century for the information war in the struggle for global world reign.

Margarita Simonyan, the editor-in-chief of Russia Today TV channel, said that having no foreign-language broadcast in the modern world was similar to having no defense ministry. "Apparently, Clinton thinks so too. This is why the States spend up to $800 million every year on foreign-language broadcast," Simonyan wrote on her blog.
At the same time, Simonyan added, Hillary Clinton used the Russian TV channel as an argument to increase the funding of American foreign broadcast under the conditions of extreme budget deficit.

Aleksei Filatov, the vice president of the International Associated of Veterans of Alfa Antiterror Group, believes that Clinton's remarks do not mean that Russia is winning the information war with the USA.

"This is total profanation. Mrs. Clinton is acting against her conscience. She flatters Russia a little and misleads senators. She perfectly realizes that they now win on information battlefields, rather than conventional battlefields. That's why she is bluffing a little. However, she unwillingly showed her cards as she outlined Washington's major concerns - the Middle East, China and Russia," the expert said. It is not serious to say that only one Russian channel beats this information armada, he added.