The private life of Hugo Chavez 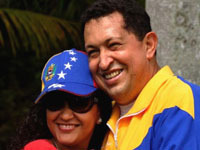 It is an open secret that Venezuelan President Hugo Chavez has many female admirers. One can easily find many discussion board in his honor online. Chavez is a prominent politician, who is known for his anti-American speeches. He is also a talented singer. In general, Chavez is a charming man, who hardly ever wears a tie. He sincerely communicates with common people.

However, Hugo Chavez is single. There are many rumors going around his affairs. Unlike such Casanovas of politics like Italian Prime Minister Silvio Berlusconi or French President Nicolas Sarkozy, Chavez never makes a parade of his private life. There is something, though, that Chavez has in common with Berlusconi and Sarkozy. Like them, the President of Venezuela has the sad experience of two divorces.

Chavez divorced his first wife, Nancy Colmenares, in 1992 - seven years before his rise to the political pedestal of Venezuela. Colmenares and Chavez had four children - two daughters and two sons. The president maintains a close contact with his children from the first marriage.

Chavez's second wife was Marisabel Rodriguez Oropesa, a journalist, with whom he broke up in 2003, during his presidency. The couple had a daughter, Rosines. Unlike the first wife, Marisabel started doing politics and joined the opposition camp of Venezuela. She criticizes her husband on a regular basis.

Marisabel Oropesa was very much concerned about Chavez's behavior during the Ibero-American summit in 2006. During the summit, Chavez called the former prime minister of Spain Jose Maria Aznar a "fascist." He also squabbled with Juan Carlos, the King of Spain, and accused the Spaniards of the brutal colonization of America 500 years ago.

"How could be behave like that with the King of Spain?! It is mind-boggling! I am not a national of his His Majesty, but I respect him! The President! One should respect other people, and they will respect you in return. To set forth some claims 500 years later is not a very good historical moment. How can Mr. President ask the King of Spain if he was worried about the events that took place 500 years ago?" she exclaimed.

At the end of 2007, Marisabel played a very mean political trick on Chavez. She was urging the people of Venezuela to vote for the expansion of presidential authorities at a referendum. The referendum could also give Chavez a chance to be reelected for an unlimited number of terms. "The people have been fooled with the declared reforms. They will eventually have their rights and freedoms restricted. I can't agree with that," she said.

One can not say whether Marisabel's words affected the choice of the people. However, the fact remains - Chavez lost the referendum of 2007. He achieved his goal a year later, though: Hugo Chavez can be reelected for an unlimited number of times. His ex-wife remains in an opposition to him; she has turned pro-American.

The shortage of trustworthy information about the personal life of the President of Venezuela started many rumors. In 2004, the media were scrutinizing his affair with journalist Mari Pili Hernandez, but there was no evidence found to prove anything. In 2007, it was reported that Hugo Chavez was having an affair with British supermodel Naomi Campbell. The model arrived in Venezuela to interview the president for GQ magazine. "He is not a gorilla, he is more a bull. Whatever the future holds, for me his role will always be that of a rebel angel," she said.

Naomi Campbell did not become Chavez's wife. She is now having a relationship with Russian oligarch Vladislav Doronin. Chavez is still single. Many women hope to win the heart of the most outstanding politician of Latin America. However, as it turned out, Chavez does not like women doing plastic surgery. When a woman called his radio program and asked for some money for breast augmentation surgery, Chavez said that plastic surgery was a "monstrous thing."

One of his female fans wrote once that Hugo Chavez was a very lonely man, who needed love, care and a bowl of soup. Venezuelan women say that they would like to see a beautiful, smart and politically educated, albeit not a jealous woman, near Chavez.